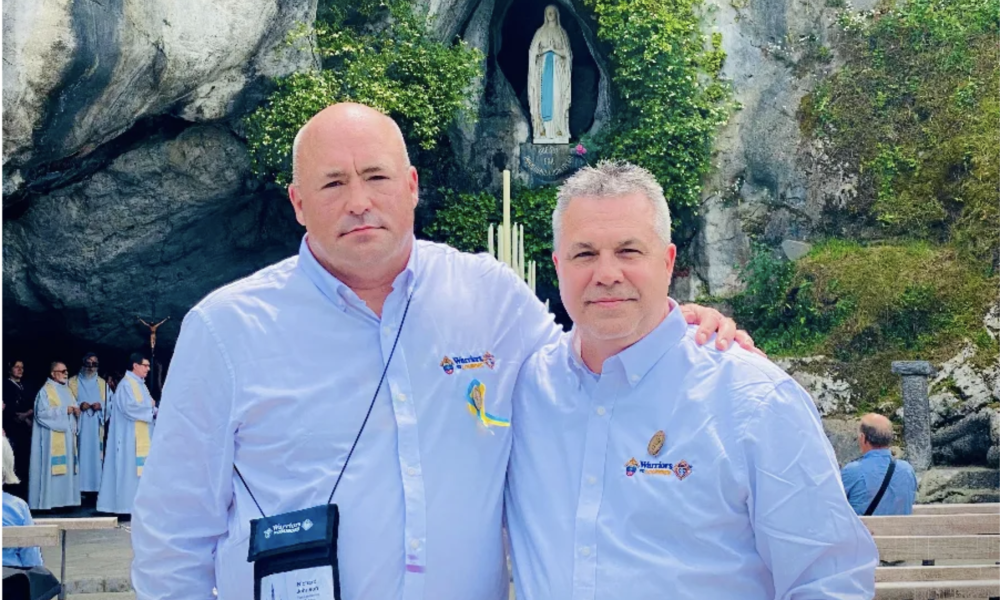 ‘I Felt I Completely Lost My Soul’: Us Veteran and Ex-military Nurse Battling Addiction Finds Solace at Lourdes

Lourdes, France (CNA) - In 2001, Richard Johnson suffered a major knee injury during an operation in Kosovo. The military nurse was given strong painkillers, which led him into an addiction that gradually dragged him into the abyss.

He spent the next 14 years in growing isolation and despair. When his family — practicing Catholics with a proud tradition of military service — lost all influence over him, they resolved to support him by prayer, from a distance.

“My family grieved me as I was basically gone,” Richard, 47, told CNA during the May 10-16 Warriors to Lourdes pilgrimage. “I spent years in darkness, with no thought, no emotion. I felt I completely lost my soul, while my mom was praying the rosary continuously.”

He is aware, with hindsight, that it is thanks to the intercession of the Blessed Virgin Mary that he emerged into the light.

In 2014, he experienced a psychotic break in which he lost all contact with reality. It took four years for him to come through it.

“One night, in 2018, in a totally sudden way, I heard the first thought in my mind in four years,” he recalled. “And I know now that all was connected. At that point, I felt what I would describe as a flood of grace. I felt at peace, started to feel emotions again, my soul was coming back.”

That night, Richard felt compelled to pray, even though he had cut himself off from his childhood faith as a teenager after his parents’ divorce, some 20 years earlier. A week later, a strong will to pray the rosary arose in him.

“I asked a Catholic friend I had in the Army to help me pray as I had forgotten everything,” he said. “Then I started reconnecting with people, with my faith and Scripture, and I became a completely new person. I felt a special draw to Our Lady and to Lourdes.”

This new path of faith led him back to his older brother, Djay, to whom he was close in his youth, before his addiction put an end to their relationship.

Djay, 51, a retired Army staff sergeant, accompanied Richard on the Warriors to Lourdes pilgrimage, co-sponsored by the Knights of Columbus and the Archdiocese for the Military Services, USA.

Each year, around a hundred soldiers “in need” are selected from across the country by the leadership of Warriors to Lourdes, which covers the trip’s expenses. More than 175 active-duty personnel and veterans took part in this year’s pilgrimage, led by Archbishop Timothy P. Broglio.

Participants in the Warriors to Lourdes program are offered a daily English-speaking Mass and “faith and fellowship” sessions. They can also join in activities related to the International Military Pilgrimage, which took place this year on May 13-15 and brought together around 10,300 pilgrims from 42 countries.

Djay told CNA: “During the high of Richard’s drug addiction, I couldn’t help him as when one is addicted, one doesn’t listen to anyone. So I spent a lot of time with God, preparing for his arrival to come back home.”

Djay decided to write spiritual stories to encourage all those who, like his brother, are struggling with addiction and depression. His unshakeable faith allowed him to accompany his brother on his spiritual journey as he began to recover.

Although they lived far away from each other, their relationship was strengthened through long, regular phone conversations about God and their interior lives.

“We had spent over 20 years away from each other, but our conversations picked up as if we never parted ways, we were so excited to talk,” Richard remembered.

He noted that their bond had reached new heights during their pilgrimage to Lourdes, which, he said, marked the culmination of a three-year spiritual journey.

For Richard, the Knights of Columbus’ decision to select him and his brother — who also suffers from significant health problems — for the pilgrimage to Lourdes is also a matter of providence.

In 2021, a month after he consecrated himself to the Virgin Mary, Richard experienced serious health issues that confined him to a hospital for several weeks.

“Although I was very ill, I knew Our Lady would intercede again,” he said. “One day, a priest counseling me at the hospital told me about the Warriors to Lourdes pilgrimage. He encouraged me to apply, and everything fell into place.”

Richard now approaches life with unprecedented serenity and gratitude. He came to Lourdes, the city where the Virgin Mary appeared to St. Bernadette Soubirous, with the desire to discover how best to use his past experience to serve God. He is now convinced that sharing his testimony, especially through writing, will help many people, especially as the opioid crisis continues to take its toll in the United States.

“Me and my brother want to share what we’ve been through and tell people that no matter how far down one is, how dark it is, there is hope, because God still cares,” Richard said.

“I was there, I experienced that and God took me from where I was.”

He added: “This trip to Lourdes brought me a profound healing and my heart is in a state of complete thanksgiving.”

“I’m being emotional just being here. Every time I receive Holy Communion here, I want to weep. Same with the anointing of the sick.”

“It’s been such an awakening for my soul, and I’ve become a truly new person in Christ.”

Photo Caption: Richard Johnson, left, and his brother Djay attend the 8th annual Warriors to Lourdes pilgrimage on May 10-16, 2022.