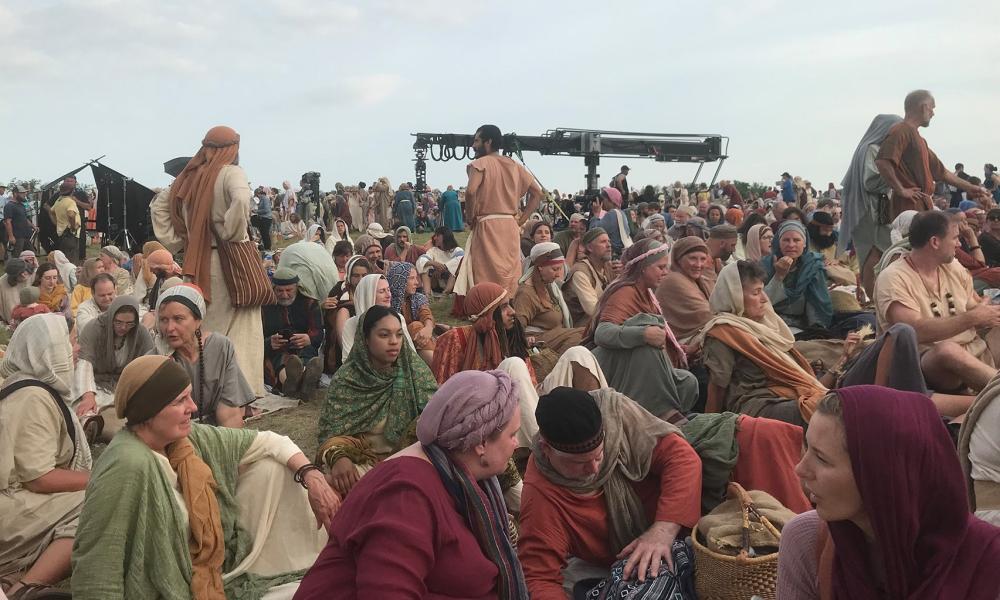 Catholics are among 5,000 extras filmed for 'Chosen' episode

"We got to sit probably 20 feet away from where Jonathan (Roumie, actor depicting Jesus) sat and taught the parable of the sower," said Mancino, a 64-year-old Little Rock resident.

"I'm listening to him, sweating in these first-century clothes, and part of me felt I was sitting and listening to Jesus; and I know he's not Jesus, but it takes you to that point," she said. "You hear Jesus was preaching to 5,000 people, then you see that and think, 'Wow. That's how they were then,' walking miles to see this guy because he was so exciting to them."

Mancino was one of about 11,000, including a handful of Catholics from Arkansas, who traveled to Midlothian, Texas, 25 miles southwest of Dallas, in early June to be extras in the popular streaming show "The Chosen," which depicts the life of Jesus.

The show was filming, among other scenes in Jesus life, the story in Matthew 14:13-21 where Jesus feeds 5,000 from just five loaves of bread and two fish.

"The Chosen," which streams for free on the Angel Studios app, debuted its pilot in 2017, releasing its first season two years later. It is the first multiseason show about the life of Jesus and has garnered millions of fans and critical acclaim.

The show has released two seasons, with a third season to be released later this year. Its goal is to tell Jesus' story through seven seasons, each season crowdfunded by viewers, according to watch.angelstudios.com/thechosen.

"We'll bring our loaves and fishes, you bring yours by paying it forward and together we'll watch God work miracles," according to the website.

So far, 23% of season four has been funded, with seasons one to three 100% funded. The series, so far, has 16 episodes plus a Christmas special. It's been an ambitious undertaking by filmmaker Dallas Jenkins, who created, directed and co-wrote the show, which has been the most successful crowdfunded media effort of all time.

Mancino, a member of Our Lady of Good Counsel Church in Little Rock, said she has been a fan of the series from the very beginning.

"It is so in-depth on all the people as opposed to most, even great, movies that talk about Jesus and his disciples that aren't in-depth on anyone," she told the Arkansas Catholic, Little Rock's diocesan newspaper. "They go in-depth on every apostle, Mary Magdalene, they flashback to scenes from the Bible, the Old Testament. ... It makes you feel like you're there."

"It's good because they show them as human, Jesus as human, which he was," she added. "He jokes around, laughs, gets mad. It's such a good depiction of the people and all the actors were obviously selected by God to play these parts."

So last August, when Mancino saw the show was selecting extras to be a part of the "Feeding of the 5,000" episode, she was all in, along with close friend and fellow parishioner Diane Hanley.

Extras were those who donated at least $1,000 to the project.

"We just felt privileged. It's a cause that's dear to our hearts," Hanley, 67, said of her and Mancino.

Mary Jo Lewno, a parishioner at Christ the King Church in Little Rock, also donated. For an extra $100, she was able to take her 19-year-old grandson, Alex Blair, a freshman film student at the University of Central Arkansas in Conway.

"There's so many people who talk about how their lives totally changed or the life of a child, or a relative who watched it. That they were totally affected by it," Lewno said of the show. "This is certainly worth the donation because it's such evangelism."

While Lewno and Blair were back pretty far on their filming day, June 7, they were treated with a surprise chat from the cast, who filed onto a stage.

"You never saw a 77-year-old woman move as fast to the stage," Lewno laughed. "They all talked about their feelings in seeing so many of us there and knowing we had contributed to be there, traveled there and made our costumes."

With the show wasn't being recorded, there were photo opportunities, meals, and praise and worship music for fans to enjoy. Everyone was required to take a COVID-19 test before arriving and also were tested for COVID-19 onsite. According to "The Chosen" Facebook page, extras came from all 50 states and 36 countries.

Hanley and Mancino were given fish from the apostle Matthew, played by Paras Patel.

"To be there at the 'Feeding of the 5,000' even though we were just acting ... to see the scope of what the apostles had to deal with, all these people and there were only 12 of them holding baskets ... that was a huge event, a huge job for those original apostles," Hanley said, adding that the scope of the miracle parallels to the miracle Catholics experience in the Eucharist.

"Jesus' body is enough to feed the whole world. From sunup to sundown, Masses are being celebrated. Jesus’ disciples are out there passing out the bread just like that," she said.

The two also got to meet show creator Jenkins, who Lewno also said was around greeting and interacting with people.

"It'll change your life," Hanley said of the show and the experience. "It's like 'Lectio Divina' for the 21st century because you put yourself into the Scripture. What did it smell like? What did it feel like? What are you hearing? What was happening on the corner" near Jesus, "typical questions for 'Lectio Divina' style of prayer with the Scriptures, putting oneself into the story."

"They have thought through and prayed through all of these sensory pieces like St. Ignatius," Hanley added, even though the creator is not Catholic. Roumie, who plays Jesus, is Catholic and often contributes his voice talents to the Catholic prayer app Hallow.

Caption: A crowd of about 11,000 extras, including Catholics from Arkansas, gather in Midlothian, Texas, June 8, 2022, for the filming of the "Feeding of the 5,000" episode of the popular streaming show "The Chosen." (CNS photo/courtesy Diane Hanley via Arkansas Catholic)