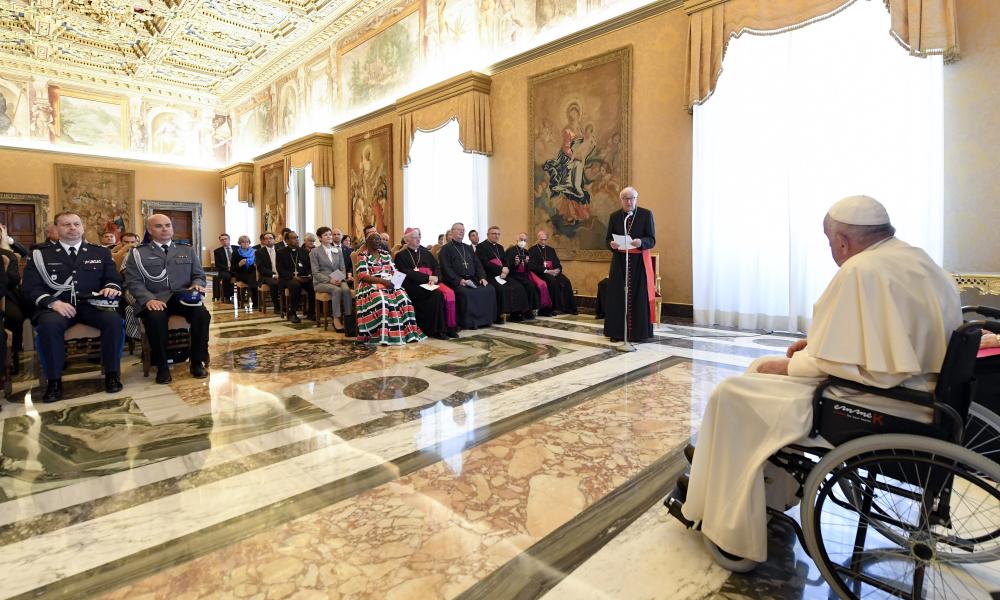 VATICAN CITY (CNS) -- The fight against human trafficking needs to include promoting the ethical and responsible use of technology and social media, Pope Francis said.

"I would also mention the essential need to support, accompany and reintegrate the victims of human trafficking into our communities and assist them in the process of healing and the recovery of their self-esteem," he said in a speech to a group of experts and leaders fighting human trafficking.

The pope spoke May 19 to people attending an international conference of the Santa Marta Group, an alliance of leaders of various law enforcement, government and civic and religious organizations to share their expertise, experience and best practices in the task of preventing and combatting human trafficking and modern forms of slavery.

The conference took place May 17-19 May at the Pontifical Academy for Social Sciences at the Vatican.

The pope thanked them for their "commitment in seeking to eradicate this criminal activity that violates the dignity and rights of men, women and children and leaves long-lasting effects upon individual victims and the broader society."

Since the Santa Marta Group was established in 2014, it has "devoted itself to fostering an ever greater understanding of the scope and nature of human trafficking and to strengthening cooperation on the international, national and local levels so that effective ways to end this scourge may be found and that its victims may receive needed care, both physically and spiritually," the pope said.

"Sadly, modern forms of slavery continue to spread," even in wealthier nations, he said.

The pope said he hoped the fight against human trafficking would expand its scope and include promoting "the responsible use of technology and social media, as well as the need for a renewed ethical vision of our political, economic and social life, one centered not on profit but on persons."

The pope encouraged them "to persevere in your efforts to uphold the God-given dignity of every person and to defend the fundamental human rights of those who are all too often forgotten and have no voice."

A statement distributed to reporters May 18 estimated there are more than 40 million victims of trafficking and modern slavery, and trafficking generates at least $150 billion a year. "This evil crime continues to grow, and greater numbers of vulnerable people are falling prey to organized criminal gangs," the statement said.

Because the number of victims continues to increase, there is a clear need to increase efforts to fight trafficking, it said.

The global conference focused on exploring "what works, what doesn't work and how the Santa Marta Group can make good on its initial promise to bring decision-makers together from around the world to share their experiences and initiatives, learn from each other and find solutions to human trafficking."

The aim was "to refocus and reenergize activities in light of a worsening situation across the world caused by the pandemic and continuing conflict and instability in many regions," it said, and to create an "action plan that will help to guide local and regional activity" and "the way forward for Santa Marta Group over the coming year."

Cardinal Vincent Nichols of Westminster, England, president of the Santa Marta Group, told reporters about the action plan at a news conference after the papal audience. It includes efforts for prevention, education, listening to victims and strengthening collaboration between the church and civil society, he said.

The cardinal said attention must be on healing the wounds of victims and defending their dignity.

Photo Caption: Pope Francis speaks to those attending an international conference of the Santa Marta Group at the Vatican May 19, 2022. The Santa Marta Group is an alliance of leaders of various law enforcement, government and civic and religious organizations to share their expertise, experience and best practices in the task of preventing and combatting human trafficking and modern forms of slavery. (CNS photo/Vatican Media)