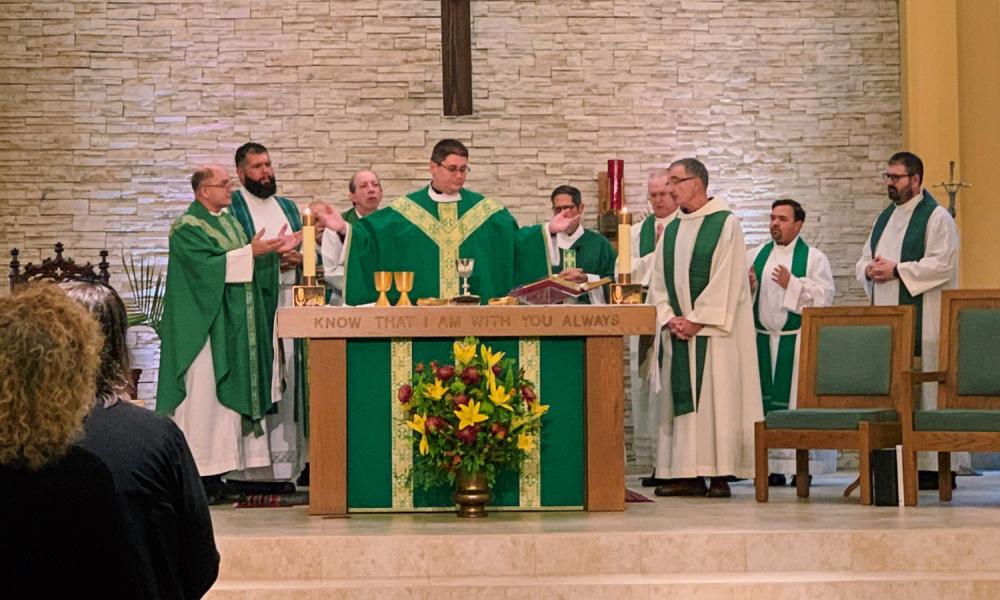 In the Catholic world we often encounter women and men who have chosen to live radically different lives. Often it can lead us to ask, “what’s his or her story?” In this series we are honored to share the stories of priests and religious in the Diocese of St. Petersburg. Do you think you know what priesthood and religious life is all about? You might just be in for a few surprises.

Caption: Father Jonathan Emery is pictured during the Mass of his installation as pastor of St. Matthews in Largo on October 16th, 2022. Courtesy photo.

November 1, 2022 | Today, we focus on Father Jonathan Emery. On October 16, 2022, Monsignor Robert Morris installed Father Emery as pastor of St. Matthew Parish in Largo. He grew up in Plant City Florida and was ordained in 2014.

How many kids in your family?

I am the eldest of five, four boys and one girl.  When people hear this, they usually respond with either: “I bet she was spoiled” or “Oh, that poor girl!”  I find that it was probably a little bit of both for her.  Like any siblings, we didn’t always get along growing up, but we are pretty close now.  My siblings help to ground me to normal life.  It is great to see them growing up, marrying, and having children.

Where did you grow up?

I was born in Tampa and raised in Plant City.  A lot of people here in Pinellas are surprised by this, because so many people who live here are from another part of the country.  However, in Plant City I was classified as a “new resident” because I was a first-generation resident.  Many families had been there for over a century.

Why did you want to become a priest?

When I was in high school, I noticed that I had fun with my friends, but as soon as I stopped hanging out with them, I felt a letdown.  However, when I went to Mass on Sundays, I would have a sense of peace that would last for hours, and sometimes days, after I left.  That peace made me feel like it was possible that God was calling me to do something in the Church.  I had a hard time believing that I’d be good at priesthood, but God kept tugging at my heart.

Did someone encourage your vocation?

Several people encouraged my vocation.  My parents had the greatest impact.  As a young man, my dad was in seminary for a couple years before leaving and then meeting my mom.  However, he always had a deep love of God and the Church, so he made sure to drive home to us that priesthood/religious life is a legitimate vocation, not just marriage.  My mom helped by teaching me the faith and giving me a book about the life of St. John Vianney, which inspired me a lot as a young man.  There was also a sacristan at my home parish who took me under his wing as a young altar server and helped me to really appreciate the liturgy of the Church.  My pastor during high school was also important for my vocation, as he showed me the joy and humanity that a priest can have.

What is your favorite part of being a priest?

My favorite parts of being a priest is preaching the Gospel and celebrating the Sacraments.  The Gospel is the “good news,” yet it is often taught as if it were an instruction on how to watch paint dry.  In reality, the Gospel is the best piece of information in the world, and I love sharing its power with other people.  The Sacraments are a massive contact point with the grace of God, and they also allow me to be with people all throughout their lives, from the womb to the tomb.

What was the conversation like with your parents when you said “Hey, I want to become a priest?”

My dad was excited, but immediately began warning me about things he noticed when he was in seminary.  His input was very helpful.  My mom initially worried that I was too young to make such a decision, but she quickly found that it was a good fit for me.

What would you say to a young man who is thinking that God might be calling him?

The devil will attack you with fear.  All of the guys who make it to (and through) priesthood had great fear about it.  Some version of the phrases… “I am not worthy” and “I can’t do it,” are a big part of that attack.  These statements are technically true.  Only Jesus is worthy, and no human can do what a priest does.  However, they also don’t matter.  God isn’t calling the worthy and He qualifies the called.  It is God’s grace that does the work, we just have to cooperate with that grace and accept his call.  The way to do this, is to have a deep prayer life.  So, start discerning by developing or deepening a life of prayer and see where the Lord draws your heart.

What is one thing people would be surprised to learn about you?

The thing that shocks people the most when I reveal it, is that I was very shy and afraid of public speaking before I entered seminary.  Actually, I was so afraid of public speaking, it almost stopped me from applying to seminary.  One more example of God’s grace at work!  Throughout seminary, I was forced to start small and slowly build it up, until I got to the point where preaching became one of my favorite parts of priesthood.

As the newly installed pastor of St. Matthews, what are you looking forward to?

Well, I have been administering the parish for nearly a year and a half now, so I’m starting to get used to a lot of the day-to-day functions of a pastor.  During that time, I have found that the main difference between being a pastor and a parochial vicar, is the sense of responsibility.  Being a vicar is similar to caring for the kids of your siblings or friends, whereas being a pastor is like having your own kids.  You don’t “own” the parish, but you carry a great responsibility and love for it.

Humans are notorious about over complicating prayer, try to weed this out of life.  Start by acknowledging God’s presence.  Share as honestly as possible what is going on in the heart and then MAKE sure to sit quietly with God. Don’t try to control the conversation, but let Jesus take the lead.

I would also like to thank my parishioners for all the support they have given me and the parish. 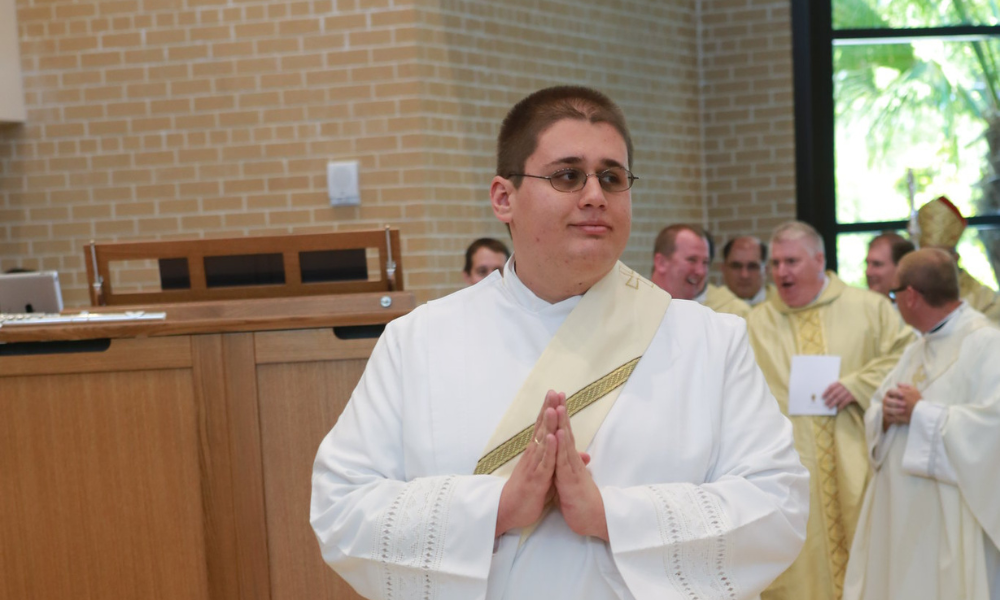 Caption: Father Emery is shown on his ordination day in 2014.