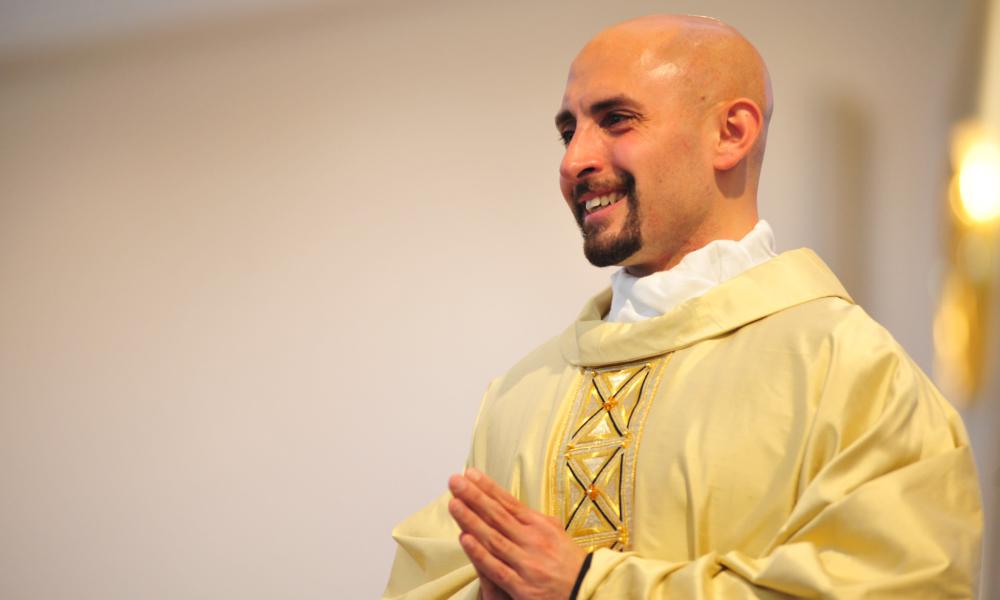 In the Catholic world we often encounter women and men who have chosen to live radically different lives. Often it can lead us to ask, “what’s their story?” In this series we are honored to share the stories of priests and religious in the Diocese of St. Petersburg. We are grateful to Spirit FM for sharing these conversations with us from their “Father Friday” series. Do you think you know what priesthood and religious life is all about? You might just be in for a few surprises.

Father Alex, where did you grow up?

I was born and raised in Spring Hill, Florida. I went to a few schools up there, a Catholic school, a Baptist school, and eventually graduating from Bishop Mclaughlin Catholic High School. I was part of the first graduating class at Bishop Mclaughlin. From there, I went to the University of Central Florida studying philosophy. After my second year, I switched and went to St. John Vianney College Seminary in Miami. Afterwards, I went to the North American College in Rome and studied at the Pontifical Gregorian University.

Do you have any siblings?

I first felt a calling to the priesthood when I was in about fourth grade. Being so young, I didn't really know too much about it. In fact, I kind of joke that in fifth grade I went up to my pastor at the parish, and I said, “Hey, Father, I think I want to be a priest.” He somewhat jokingly – but also seriously – said, “Oh, that's very good! Come back to see me in a few years.”

What's awesome about this is that he was the one who reminded me about my vocation when I was in the eighth grade. As a kid, I had begun focusing on many other things. One day after Mass, he approached me and said, “Hey, you're the kid who wanted to be a priest, right? Do you still want to be a priest?” I remember stopping dead in my tracks in the church and being like, “Yeah, I do.” It was his reminder, his follow up, that set me on the path.

From there, throughout middle school and high school, I really wrestled with it. That, I think, is the theme of my vocation. I knew I felt this was what God wanted for me, but I had to struggle with wanting it myself. Admittedly, I really didn't like the fact that He wanted it for me. I didn't want that. I wanted to make my own life.

At that point, I was much more inclined to work with my uncle at his funeral home. I really saw that work as a ministry. In that moment, people really need to be taken care of, ministered to, loved. I worked with my uncle for a little bit before I entered seminary, and I just loved it. So, I didn't like the fact that I was called to be a priest, but I came to truly embrace it! My incorrect interpretation of it was, God is forcing me to be a priest; so, it's kind of shocking to some people, but I really did not like the call before. If you know me now, you know that I love being a priest.

So, what was that turning point where you said, “Okay, God, you're in charge.”

I honestly had the turning point within seminary. I remember when I was in college at UCF that the thought came to me of “Well, I think God's going to end up winning this fight.” So, I decided to start learning about what seminary looks like. I reached out to a priest I knew in Orlando. He advised me to reach out to the Vocation Director at the time, Father Len Plazewski.

Father Len said “Alex, I always knew this day would come” and he offered me the application. It was like my whole life flashed before my eyes at that moment, not looking back but looking forward. I kind of realized at that moment that if I didn't say yes to applying and entering, I never would. I had to reckon with that desire on my heart, that deep down even as much as I was fighting, I really wanted this.

Then in seminary, those first six, seven months of seminary, that first year, I still wrestled with making the call my own. I was almost in seminary begrudgingly, like I had a chip on my shoulder. My thought looked like, “God, I'm only here because you want me to be.”

So, you didn’t feel like going to seminary was your idea?

Exactly. Because it wasn't my idea. I felt like God was forcing me. But I was going through with it because I was trying to be a good Catholic and trying to be a good son of God. One day in prayer it hit me, though. I was really praying and asked, “Why am I so exhausted?” The image came to me of myself boxing with God. It seemed we were going blow for blow. And then it hit me. In my image, I realized he wasn't fighting me. I was fighting him. He was trying to embrace me, but I wouldn't let Him. I then realized I could stop fighting Him and embrace Him back. With that and the help of great brothers in seminary – such as Father Chuck Dornquast – who helped me settle down and realize what it was all about. Once I learned to stop fighting and that God didn't want to impose something on me, but was inviting me to the greatest life ever, it’s like it clicked.

What is your favorite part of being a priest?

Well, I’ve been a priest now for over 5 years and I absolutely love being a part of people's lives. It’s a joy to be a part of their families and to be a part of their friendships. It's just so profound to have the privilege and honor of being a part of so many people's lives, many good people's lives. It's amazing. It's like you have all these extended families. It's like you're an uncle or a father and some of these families you walk through life with. We can start with a family in a baptism, then First Communion and Confirmation, and then marry them and bury them. It is a beautiful journey. I’m young in priesthood and haven’t run the full journey with someone yet, but I have shared in a family as they experienced each of those moments. But even the simpler moments are so rich. I've had so many great meals or meetings or just spending time with so many families, so many people. It's just amazing. I'm so blessed.

If someone asked how they could pray for you what would you say?

Just pray for me. Just put in a good word and pray that the Lord works through me that I'm able to bring God's love to everyone I meet.

Individual donations to the Catholic Ministry Appeal make the Office of Vocations possible in our Diocese, serving thousands each year.

Photo Caption: Father Alex Padilla is all smiles on the day of his Ordination to the Priesthood in 2016.