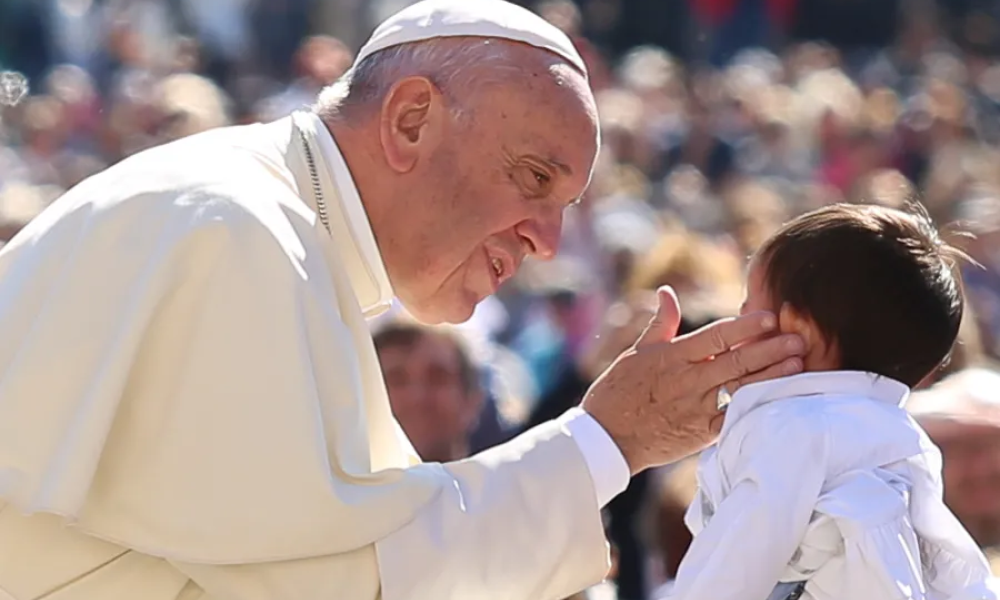 Pope Francis on Adoption: ‘Every Child that Arrives is God’s Gift’

Vatican Media:  Pope Francis greets a child at a general audience at the Vatican, April 20, 2016.

August 25, 2021  (CNA) - Pope Francis has released a video with an encouraging message for pregnant mothers that also asks Catholics to be open to life through adoption.

“I want to say to every woman expecting a child: you are God’s awesome instrument to welcome and offer new life to the world,” Pope Francis said in the video issued on Aug. 25.

“Every child that arrives is God’s gift. Every baby, in every case, and in whatever situation is to be welcomed,” the pope said.

Pope Francis said that to adopt and give someone a family is an act of love by which a man and a woman become mediators of God’s love.

“Adoption is a Christian choice,” the pope said.

The video features an Italian family with seven children who serve as missionaries in Bridgeport, Connecticut.

“When we were first married, after two miscarriages, and two gynecological surgeries, the doctors told us that I was sterile,” Francesca, the mother featured in the video, said.

“Thanks to those seven years of terrible suffering, in which we felt sustained by the Church by the Neocatechumenal community and our catechists, we felt God was calling us to be fruitful, to open ourselves to life, to his plan for us. And so, we adopted our first son, Emmanuele, in Russia.”

“What happened after is pure grace,” Francesca said. “A few months after the adoption, I became pregnant and Giosuè was born, then Miriam, Benedetto, Israel, Simon, Pietro, and Natanaele, along with five others I miscarried. They are … waiting for us in heaven.”

The video, produced by the Vatican Dicastery for Laity, Family, and Life, is the sixth in a video series published this year aimed at deepening the Church’s pastoral accompaniment of families, as outlined in Francis’ 2016 apostolic exhortation Amoris laetitia (“The Joy of Love”).

The Amoris Laetitia Family Year began on March 19, the Solemnity of St. Joseph, and will end on June 26, 2022, with the 10th edition of the World Meeting of Families, which will be held in Rome.

The Vatican plans to publish a total of 10 videos to help people rediscover the value and beauty of the family.

“Spousal love is not completely consumed by the couple alone, but generates a family. Parents’ love is the means by which God shows His love. He awaits the birth of every baby. He accepts and welcomes each child as they are.”