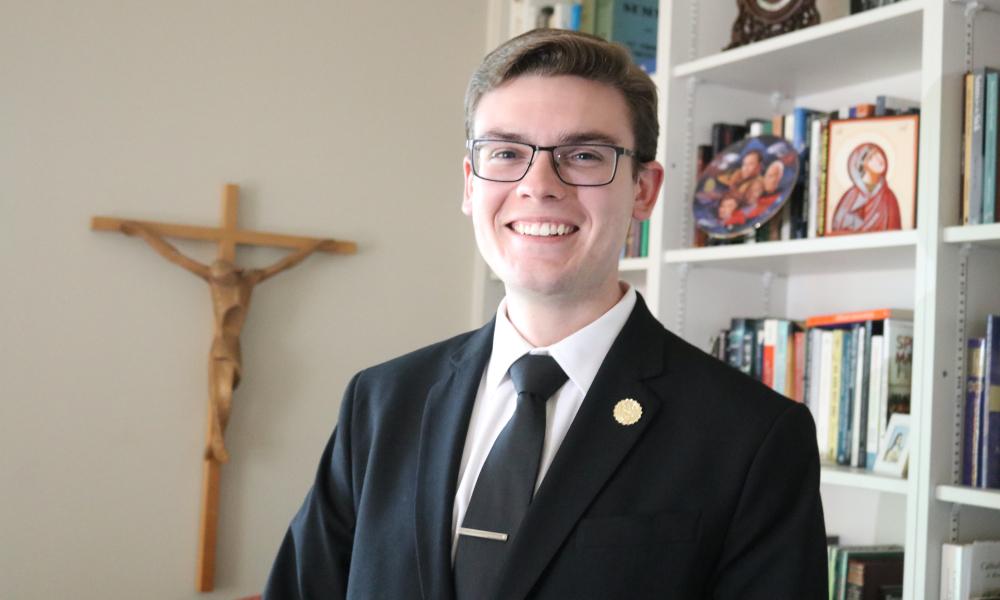 Have you ever wondered what Seminary is all about? What goes on in a seminary? Is it like college? Do you need to learn Latin? These questions and more will be answered in this interview with Vincent Washburn, a seminarian for the Diocese of St. Petersburg who is studying at St. Joseph Seminary in Covington, Louisiana.  His home parish is St. Michael the Archangel in Hudson and he graduated from USF in 2016 with a degree in psychology.

When did you feel that call to the priesthood?

It's funny, I wanted to be a priest when I was a very little kid. But that didn't last very long. So, as I was growing up, I went through a whole list of different things I wanted to be when I grew up. Then, when I graduated high school, I started to take the call more seriously. It was an encounter with the pastor at my home parish, (Father Jim Ruhlin) his example of priesthood, his joy, that made me realize this is not so far-fetched for me. Maybe the Lord is calling me to a similar kind of life. That's not impossible. So, I continued discerning throughout college and here I am.

What about your parents? Were they surprised?

They were very surprised when I told them. I don't know if my family saw it coming. I was always involved in the Church. I have always loved the faith. But there were some difficult reactions at first. But they've been very supportive throughout the whole process also. So, it's been good.

How is seminary life?

Exciting! All of your expectations go right out the window as soon as you get there. I mean that in a good way.

What are those expectations?

I expected everything to be very formal and that we would be praying 10 hours a day, morning, noon, and night. There's definitely a very intense aspect of prayer, which is good. But you quickly find out that these are a bunch of normal guys who just love to have fun, love the Lord and each other, and are there to discern where the Lord is calling them, if this is the path the Lord is asking them to take, to serve Him in His Church. So yeah, definitely, very exciting in a good way.

Are there a lot of men from Florida at the Seminary or from all over the country?

What classes have been a challenge for you?

At the college seminary, philosophy can be very challenging because it's very abstract. If you're more of a concrete thinker, which I tend to be, it can be an adjustment. So that was definitely a challenge for me at first to really think outside the box and explore why do human beings do what they do, why do we interact with each other the way that we do or why are our societies structured the way that they are. All things you didn't necessarily expect to study going into seminary.

How are the professors at seminary?

I would say at St. Joseph's they're there to give you all the help that you need to succeed. They want to see you do well and see you become a priest. I think there's an understanding in seminary formation that when it comes to men discerning out, as we would say, that's more so the work of the Holy Spirit guiding a man to decide, is this what the Lord is calling me to or is the Lord calling me to another path? They certainly want to encourage you to listen to the Lord's voice in your heart and where he's leading you. They want to see you succeed, whatever that path is, whether it's discerning out and following another path, or whether it's to the priesthood.

What's a day in the life of a seminary look like?

At St. Joseph's we start pretty early in the morning, 7:15 a.m. for Morning Prayer. We gather for communal prayer twice a day. Morning prayer and Mass together in the morning, one follows the other. And then Evening Prayer after all of our classes are over. In between Mass and Evening, Prayer, classes go pretty much the whole day.

How many classes do you take a semester?

A regular load would be five or six classes, usually about five. That could take up your whole day, or different portions of the day. In between that, at St. Joseph's, we have a health and wellness program, a fitness program that we're all required to participate in. That's 45-minutes a day, four days a week in the gym.

Yes, dodgeball and we have all the sports you can think of. That's a Louisiana thing, too. That's part of their culture. They love to do all that kind of stuff.

What classes do you take?

Last year I took a year of Latin, which is required. That was one class that I took which went really well. Then I took philosophy classes, ancient philosophy, medieval philosophy, and metaphysics logic. I took some theology classes, a class on the creed that was called profession of faith, and then another class called fundamental theology. It's sort of a broad look at how the study of theology developed over time.

Was it hard for you to give up the “normal life” to go into the Church life, or do you feel like you given that up at all?

It's certainly a very different life than what you were living before. But there's also a freedom in giving up the life that I had before for the life that I'm living now. But I don't feel like I've changed at all. I’ve gained so many new friends and brothers in the seminary and my old friends didn't go anywhere. I'm living in a different state most of the year now, of course, but we still talk on a regular basis. When I come home, we still hang out. I still talk to my family on a regular basis. It's different, but it's different in a good way.

Do you stay in touch with what's going on at the at the Vatican and all the political news?

There's no like bug line from the Vatican to us. We're not getting direct information before everybody else. Onne thing I've been impressed by is how much seminarians are responsible when hearing rumors and different things like that. We're not so quick to believe everything that we read. We're very conscious of the fact that there's a lot of misinformation out there. And we surrender to the Lord. We're all learning how to trust the Lord with our own personal lives. I think that flows into our view of the world. Trust the Lord that what will happen will happen and he'll still be there to take care of us.

What can the Church do better to serve young adults?

I think being visible is one important thing. I was involved in the in the Catholic Student Center at USF. It’s important for the Church to be visible and present to young people who can be so confused and so misguided. One of the things I love about Pope Francis so much is that he's constantly encouraging the Church to get outside of itself, to get out to the peripheries, to the people. I think the days are over where we can just sit back in the church and expect people to come to us. We need to go out and find the lost sheep or the people who are wandering around who are lost.

This interview was recorded for Spirit FM’s public affairs program, “How We See It,” hosted by John Morris.