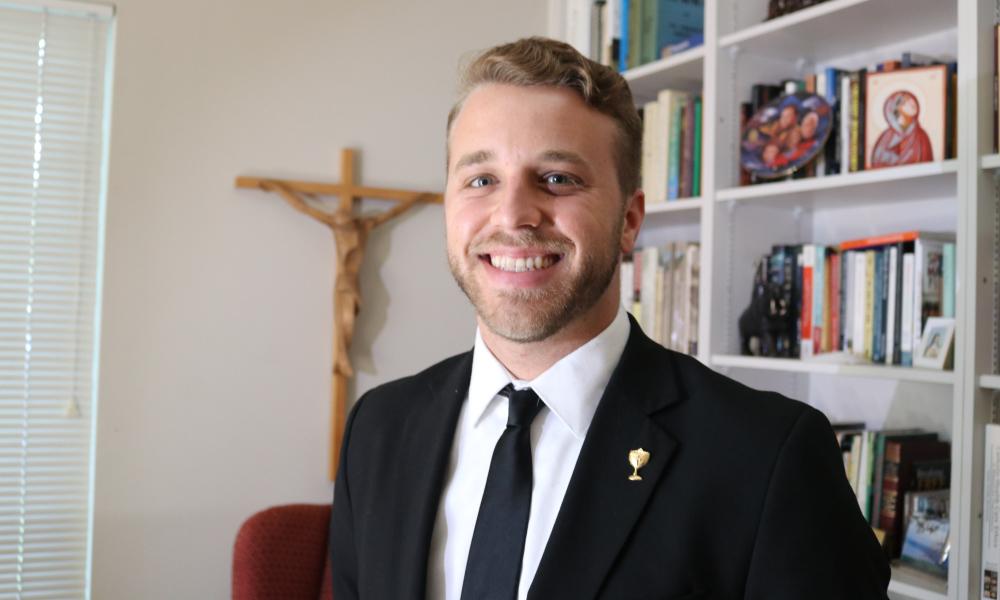 An Inside Look at Seminary Life

Tyler Gates, 24, is a seminarian enrolled at the St. Vincent de Paul Regional Seminary in South Florida. He grew up in Clearwater attending Light of Christ Parish and graduated from FSU with a bachelor’s in biology. He’s a typical young adult in many ways, except for the fact that he’s pursuing the path to priesthood. Many of us have never experienced a call like that or spent time in a seminary.  In this interview, Tyler shares what life is like at the seminary and he speaks about his unique calling to serve God as a Catholic priest.

Do you remember how old you were when you felt that God was calling you to enter the seminary?

I felt the call around my junior year of high school. I was an altar server all through middle school and high school. I felt the Lord was tugging on my heart, but I decided to go to college. During my time at Florida State University, I was involved with the Catholic Student Union. There was definitely that call that continued at Florida State. When I came back to the Diocese of St. Petersburg, the call that had been there six, seven years before, was still there. The Lord was still calling me to priesthood. I felt like I needed to answer. It obviously took longer than expected, but I'm glad that I finally said yes.

Did you ever express these feelings about going to seminary to your parents?

I think they had a feeling. When I officially told them they weren't that surprised. It's something that I was open about with my parents. My parents have always been great examples of the faith. My dad was a convert. Both of my parents raised my brother and me in the faith, and I don't think they were very surprised.

Was there a priest who influenced your calling?

Father Jacob Monteleone, who is now at Christ the King, is one of the main reasons why I'm in seminary, He has been a huge influence on me. His example of the faith and just his joy of the priesthood was what was so attractive to me. So that's why it was a lot easier to say yes to seminary and to the priesthood.

What has been a blessing for you at St. Vincent De Paul Seminary?

I would say the Brotherhood there. Before I arrived, I thought it was going to be a bunch of guys who were maybe outcasts. But these are some of my best friends. We see each other's weaknesses. We see each other's strengths. We have a good time. We work hard in our classes and obviously we’re praying the Liturgy of the Hours and participating in the Mass. But we also make time to play sports, go swimming, and have fun.

Did you have a fear about going to seminary?

I would say there was a little bit of nervousness just with a new experience. I had never seen the seminary before I walked onto campus, which is not typical. Most guys go to a “Come and See” weekend, which is normally when they'll go to the seminary and see what it’s like. But I had never done that. So, taking that leap of faith was difficult. But it helped knowing that I was giving the Lord a “yes,” knowing that he would provide, and that he would pave the way.

Tell me about your classes?

At the seminary, I’m in a class with 11 students. The professors know your name and know who you are. They care about you; they want you to succeed. They not only care about you academically, but they care about your human formation and spiritual formation. They want what's best for you and for the Catholic Church. Because if this is what the Lord is calling you to, they're going to give you the tools to be able to be the best priest you can be.

In terms of subjects, philosophy was somewhat difficult for me because I was a biology major, which is very concrete, Philosophy is very abstract. So, changing that mindset was a little difficult the first semester for me. I would say, probably my favorite class so far has been my Catechism class. I had never actually opened the book of the Catechism. So, I am enjoying reading the Catechism and being able to digest it, and not only understand it, but articulate it to other people, and to understand what the Catholic Church teaches and why we teach it.

Are you able to leave campus?

We leave campus during Spring Break, Fall Break, Christmas, etc. Then, we also get three weekends off a semester to go home or whatever it may be. Last Fall, I flew to Dallas to visit a friend and his wife. So, we can definitely go off campus. Sometimes I'll go to a coffee shop and get some schoolwork done, or the beach is only 10 minutes away. So, I sometimes sit on the beach and read a book.  I find it very important to be able to go off-campus because it's very easy when you're on the campus to feel away from society. But as future priests who are going to be with families in the parish, being able to relate to families and everyone is super important.

Was it hard for you to give up the “normal life” to go into Church life, or do you feel like you have given that up at all?

I would say it can be difficult at some points. I mean, obviously, seminary is very different than a public university. But I don't feel like I gave up my social life. There are some sacrifices. But I still call people.  I still meet up with friends and stuff like that.

What can the Church do better to serve young adults?

Churches should provide a good foundation for middle school youth group and high school youth group. Praise God, I had a really good middle school and high school youth group. Then, I went off to college and I got involved with the Catholic Student Union. That was one of the best things I could have done. Because these were people that were striving after the Lord. We went to Mass together. We would hang out and have Bible studies and all that. These are friends that I'll be friends with for the rest of my life. Last weekend, I flew to Wisconsin for the baptism of the son of one of my roommates from the Catholic Student Union. This upcoming weekend, one of my other roommates is getting married. So, these are men specifically that I'm speaking about, who our relationship is centered around the Lord. They say the people that you surround yourself with are who you're going to become. So, the biggest thing is finding that unit in middle school, high school, and in college specifically. This is a time when it's now your responsibility to decide, am I going to keep going to church, am I going to say that I'm Catholic, am I going to live out these values? So, I would say definitely say, having that foundation before going to college is essential, but then also making sure that we're surrounding ourselves with like-minded people.

This interview was recorded for Spirit FM’s public affairs program, “How We See It,” hosted by John Morris.