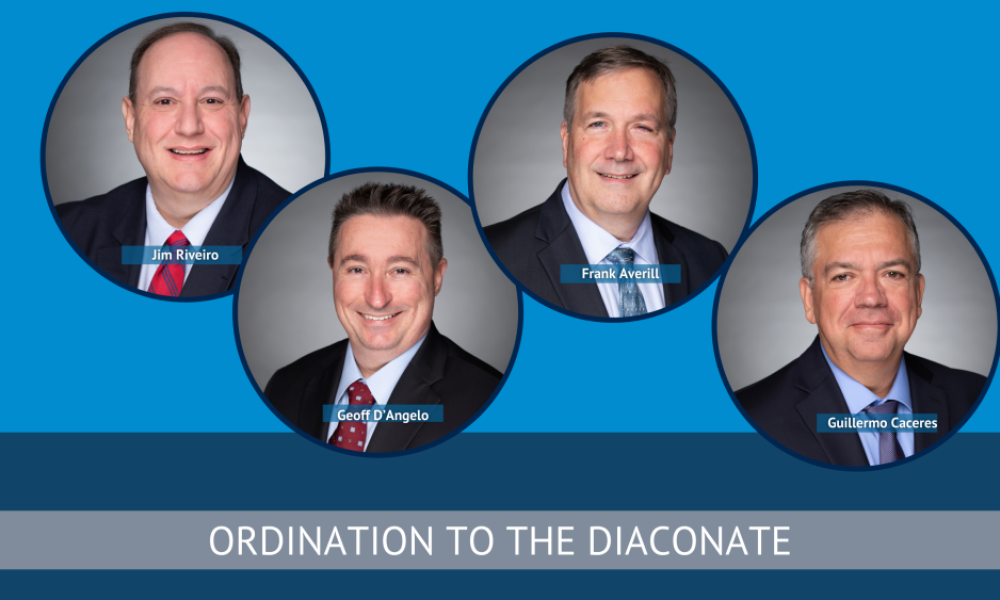 Meet the Faithful Four to Be Ordained as Deacons

Editor’s Note: To watch the livestream of the Mass, visit www.dosp.org/livestream

October 4, 2021 - Many are called but few choose to answer the call.  Four Bay area men will say “yes” to God and Bishop Gregory Parkes at the Ordination to the Diaconate, Saturday, October 16, 2021. The ceremony begins at 11:00 a.m. at the Cathedral of St. Jude the Apostle in St. Petersburg.  (You can also view via livestream at www.dosp.org/livestream or listen on the radio at Spirit FM 90.5.)

Like the disciples of Jesus, Geoff D’Angelo, Jim Riveiro, Frank Averill, and Guillermo Caceres all come from various backgrounds and professions. Two are in the medical profession, one is an audio technologist, and other in the mortgage business. Although they didn’t know each other when they began their five-year journey, they have become friends and ministers to each other.

Here is a glimpse into the lives of these faithful four men.

Geoffrey D’Angelo – “I was agnostic, almost an atheist.”

As a young man, Geoffrey D’Angelo was not a believer, and in fact, called himself “agnostic, almost an atheist.” It was the living witness of his wife, Susan, and her mother, that helped bring him to the faith.

“That first experience of picking up the Bible and reading Scripture and being convicted when reading the Scriptures; where Jesus is talking and doing a parable or miracle and I’m like, ‘Man, he’s talking to me, that resonates with me, he’s calling me out.’ The scriptures became really personal, and I couldn’t put it down,” said D’Angelo.

As a father with two adolescent children, D’Angelo knows there must be a balance of home, work, and church.

“Those in the formation process have said, ‘listen to your wife, listen to your kids, because they are going to give you feedback. You need to listen to it and take it to heart.’ It’s going to affect how I am as a dad, as a husband, it’s all encompassing,” said D’Angelo.

As a St. Stephen’s parishioner, D’Angelo will serve the parish by working with individuals going through the annulment process.

Dr. Frank Averill – “If we all were energized, we could set the world on fire.”

“Time is a precious commodity, but I have to use it in appropriate ways and the only way you can do it is to have a supportive wife, a supportive family and a supportive staff,” said Dr. Averill.

“I look forward to serving at the altar and serving the homeless. As Saint Catherine said, ‘If we all were energized, we could set the world on fire,’ so hopefully in some small way I can help the parishioners of St. Catherine set our community on fire in honor of the Lord and Saint Catherine. Dr. Averill will be serving parishioners at St. Catherine of Siena Parish in Clearwater and residents of Pinellas Hope.

Jim Riveiro – “It never occurred to me that I would be selected.”

“I knew the faith, but I didn’t have the educational background that they typically look for in a diaconal candidate,” shares Jim Riveiro, assigned to his home parish of St Joan of Arc in Spring Hill.

“Compared to the others, I was at the low end of the totem pole in terms of educational background and skills. It just never occurred to me that I would be selected. But then someone pointed out that the apostles were fisherman, they were not accountants, they were not men of stature within their society. So, I said I’ll go forward, I don’t think I’ll make it, but I’ll go forward anyway.”

Riveiro is the only single man of the four being ordained. Being a single man, working full time, and serving the church has its challenges, but it was his devotion to Mary that saw him through.

“I have very deep Marian spirituality, so I immediately prayed to our Blessed Mother and said, ‘Mother, I’m consecrating this effort to you. If your son wants this, and you’re willing to guide me through this, I’m going to leave it in your hands because there is no better guide than you,” said Riveiro.

Dr. Guillermo Caceres – “Not me, I can do other things.”

While the permanent diaconate ministry continues to grow in the United States, in other countries it’s not as prevalent. The fourth diaconate candidate, Dr. Guillermo Caceres originally from Peru, says his mother, who still lives in Peru, is a bit confused about his calling.

“Believe it or not they are not very familiar with the diaconate in Peru. There are almost no deacons there. Most only know the transitory ones, the ones that are going to be priests. They are a little confused because they are not used it,” said Dr. Caceres.

Like many others discerning the call to service, Dr. Caceres reflects, “No, again, not me. The Lord is playing jokes on people, right? How can I be scheduled for ordination in a few days? Not me, I can do other things. I’m very comfortable being an usher at the church. That was my favorite ministry. I will be happy, and I told the Lord more than once and I asked him, ‘why do you not let me stay on my corner?’ I was happy there. But you have to move on. You cannot just say no to the calls over and over. That’s not good.”

The four men to be ordained participated in a retreat recently and reflected on this prayer attributed to Saint Mother Teresa of Calcutta which summarizes the diaconate:

The fruit of silence is prayer.

The fruit of prayer is faith.

The fruit of faith is love.

The fruit of love is service.

The fruit of service is peace.

The diaconate is a vocational calling to serve the church. The word deacon comes from the Greek word diakonos, meaning “servant” or “helper.” Officially, deacons are one of only three groups of ordained ministers within the Catholic Church, the others being bishops and the priests. Deacons may be either single or married.

They are called to serve as ministers of the word, sacrament, and charity. You may have seen them proclaiming the gospel and preaching at Mass, assisting at the altar, or even officiating at baptisms, weddings, and funeral services. They serve the parish community in hospital or prison ministry, outreach to the poor, marriage counseling, or even parish business operation. They can also serve the bishop’s ministries at the diocesan level. Many deacons are married and have full time jobs outside the Church. In the United States, aspirants enter the diaconate formation program between 35-60 years old. Most men are married. Formation takes about 5 years and often includes receiving a master’s degree in Theology.

Editor’s Note: Click here to read more about our soon-to-be ordained deacons. They answer questions about their journey and their calling to serve as deacons.