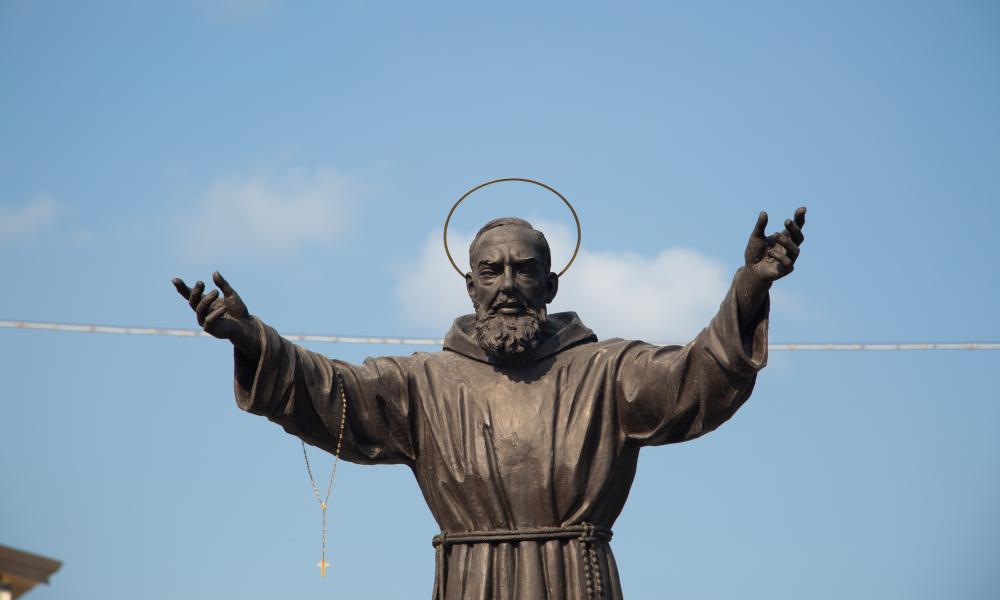 As one of the most well-known modern saints in the world, the intercession of St. Pio of Pietrelcina — more commonly known as Padre Pio — has been the source of many alleged miracles over the years. EWTN News In Depth Correspondent Mark Irons recently had the opportunity to meet with various people who were impacted by the legacy of Padre Pio, including a woman who received an extraordinary healing that would later result in the creation of The National Centre for Padre Pio in Barto, Pennsylvania.

October 10, 2022 | CNA | Born in the Southern Italian town of Pietrelcina under the name Francesco Forgione before taking the name Padre Pio in the Franciscan order, he was known for having a variety of supernatural gifts. One of these gifts was the stigmata — the spontaneous appearance in the body of wounds resembling those of Christ crucified. He also could read people’s hearts, heal the sick, and bilocate.

Despite word of his gifts spreading, Padre Pio was not well known by many U.S. Catholics during the mid-20th century. However, this began to change after the healing of Vera Marie Calandra, a 2-year-old girl who had suffered congenital urinary tract problems that left her with a dire prognosis.

For medical providers, her imminent death seemed all but sealed — even in the eyes of Dr. C. Everett Koop, a surgeon involved in her care who would later become the U.S. Surgeon General under the Reagan administration.

While Koop helped remove Calandra’s bladder to provide her comfort, he likewise advised her parents to make preparations for her funeral. However, that day did not come to pass — as told by Calandra herself when recounting the story to EWTN News In Depth.

“[Koop] said, ‘You need … to come to terms with this now, you can’t hang on to this dying child,” Calandra recounted. “And my mother went home, and she didn’t accept it.”

Calandra described how her mother, a devout Catholic, picked up a book someone had given to her about Padre Pio and heard an inner voice as she read the book that told her to bring her daughter to Italy without delay.

Quickly arranging for the trip, Calandra’s mother was able to bring her daughter to Italy, waiting in a packed corridor with others for the priest. It was then, Calandra described, that Padre Pio approached.

“And their eyes locked,” Calandra said. “That’s when she made her promise: make a miracle so that all will believe. He took his wounded hand, covered in his half-glove … pushed it up in front of her face, and she was able to kiss his hand.”

After Padre Pio touched each of them individually on their heads and blessed them, Calandra and her mother went back home to the U.S.

Afterward, during a follow-up X-ray with Koop, an extraordinary discovery was made: they found a bladder in the exact location where her previous one was removed.

“He could not explain that himself,” Calandra said. “And he just said ‘there’s a ‘rudimentary … bladder,’ [later saying] ‘whatever you’re doing, keep doing it.’”

While Padre Pio passed away soon after Calandra’s healing, her mother dedicated the rest of her life in thanksgiving to the friar and to making his name known, ultimately building The National Centre for Padre Pio near their home in Pennsylvania — with the focus of leading souls to Christ.

Nick Gibboni, the executive director of The National Centre for Padre Pio, gave insight into how the center’s mission was lived throughout Padre Pio’s life on earth.

Ultimately, Gibboni emphasized that, to Padre Pio, it was all about leading souls to Christ through the Catholic Church — a legacy that continues to live on through the work of the center.