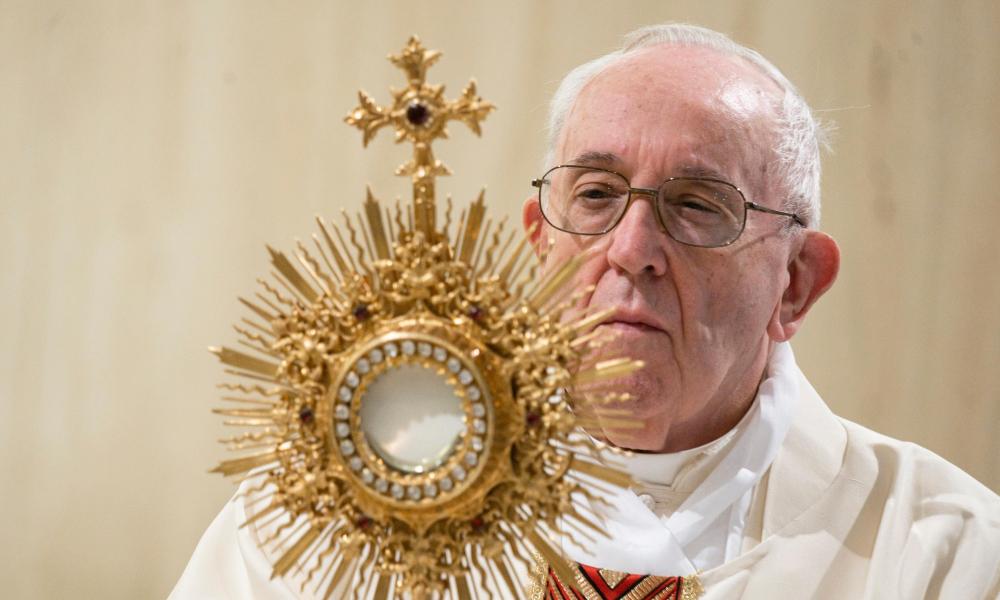 October 12, 2021 | CNS The perpetual adoration chapel is an anomaly in today's fast-paced world.

It is bare bones. There is no inspiring music or stirring messages, no group activities, no required prayers and certainly no technology. It's just believers sitting or kneeling in silence for an hour at a time 24/7 in every season.

Those who pray here, called adorers, pray before the Blessed Sacrament, the consecrated host from Mass placed in an ornate gold container called a monstrance.

They speak of praying directly to Jesus and also of keeping him company -- hence the perpetual one-hour shifts that they sign up for in advance -- although sometimes people also just drop in.

Those who sign up to pray are required to stay until the next person -- who signed up for the following hour -- arrives.

The practice means so much to those who regularly pray this way that to end it even during an extreme situation -- such as the lockdown during the coronavirus pandemic -- was unthinkable.

That was the case at St. John Neumann Church in Gaithersburg, Maryland that has had perpetual adoration for the past 19 years.

Vicky Schneider, a parishioner who coordinates sign-up sheets for the chapel, said people come to get away from the noise and distractions of their lives and experience God's love. She likened it to being "face to face" with God.

But it's also more than that. She said many who come regularly to eucharistic adoration have seen changes in their own lives that they attribute to this devotion.

Some say their faith is stronger, others say relationships with family members have improved and some say they have experienced physical healing.

She also said parishes with adoration chapels also often have an increase in religious vocations. That's certainly the case at St. John Neumann: Six men from the parish have recently been ordained and seven are currently in formation.

When Msgr. Panke first came to the parish about two years ago, one parishioner described its perpetual adoration devotion as the "fuel that runs this parish."

And he has seen that firsthand recognizing how so many parishioners have a love and devotion to the Eucharist.

"I can't tell you how many people have come up to me and expressed the grace that they have received, the healing, the comfort" from their eucharistic adoration, he told Catholic News Service this past summer.

"And this is the truth about what the Eucharist is," he added, noting that Jesus is "truly present. He is truly real. And so, if we ever doubt that Jesus is with us or present, all we have to do is just come to a tabernacle."

Charlie Minear, a parishioner who promotes adoration from the midnight to 6 a.m. shifts, said the men's ministry at the parish now has four teams of men that help fill those middle of the night hours and if someone on the team can't make it, they call in someone else from their team.

In his past few years volunteering with this ministry, he has been impressed with the faithfulness and dedication of so many parishioners and especially this past winter when it meant praying outside.

"If that is not Jesus, why would we bother?" is how he puts it.

And over the years, he said, so many people made the effort to come and pray in this chapel because "we have Jesus here and that is a blessing that has no equal."

Minear said many of the adorers have been doing this every week for years. One current regular is an active Army sergeant who prays at the chapel twice a month at 2 a.m. and comes from about a half hour away.

"We have some extraordinarily generous people," he added.

They also are taking part in something that has ancient roots, dating back to the church in the Middle Ages.

Kimberly Belcher, an associate professor of liturgical studies at the University of Notre Dame, said the practice of eucharistic adoration stemmed from people gazing at the Eucharist at Mass and having a spiritual experience.

This reverential prayer before the Eucharist also was considered a substitute for receiving Communion at a time when Catholics were not going to Mass often.

From her own study about seven years ago of Catholic college students participating in eucharistic adoration, she said the difference now -- from the Middle Ages -- is that the devotion is not seen as a substitute for receiving Communion but as a supplement to faith life.

She also said many theologians thought the practice would fade away after the Second Vatican Council, but it certainly hasn't.

Belcher told CNS Oct. 4 that many students of all religious backgrounds -- including more traditional Catholics and those involved with social justice -- told her they liked the experience of silently praying before the Eucharist.

For many, part of the appeal was clearing their time for prayer and nothing else which is crucial in a culture where Belcher said people are "pressured to be doing something all the time."

Interestingly, she said, these millennials also saw the practice as something ecumenical, that they could invite other believers to where they might not feel the same about inviting others to Mass.

And almost everyone she spoke with about what they get out of eucharistic adoration quoted the descriptor of the devotion used by St. John Vianney.

"I look at him and he looks at me" is how the story goes of what a farmer told the saint, known as the Cure d'Ars, about his long hours before the tabernacle.

And more than 160 years after the saint's death, that's still the takeaway for many Catholics who are praying before the Eucharist at any given hour in chapels, or even makeshift chapels, around the country.

Photo Caption: Pope Francis raises the monstrance during eucharistic adoration at the end of Mass in the chapel of his Vatican residence, the Domus Sanctae Marthae, May 5, 2020. (CNS photo/Vatican Media)