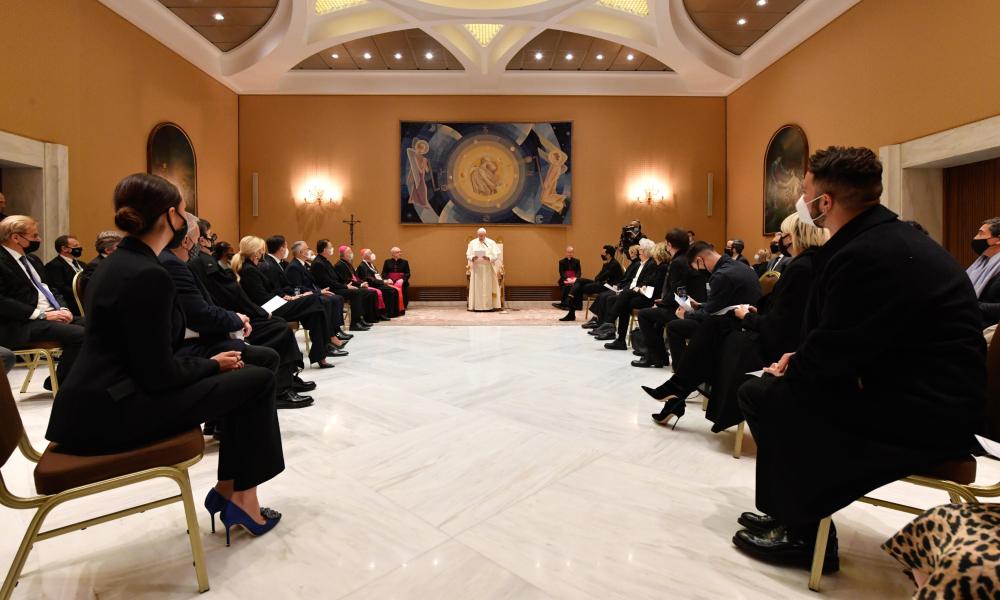 Caption: Pope Francis leads an audience with performers of the Vatican's annual Christmas concert Dec. 12, 2020. On Oct. 14, 2022, he met with organizers and participants in a Christmas music contest promoted by the Pontifical Foundation Gravissimum Educationis. (CNS photo/Vatican Media)

October 14, 2022 | VATICAN CITY (CNS) -- Pope Francis told young musical artists to be original, creative and true to themselves and to use their talents to promote peace.

"Do not try to copy the big 'stars' of show business. Do not follow the trends and patterns of success," he said Oct. 14 during an audience with organizers and participants in a Christmas music contest promoted by the Pontifical Foundation Gravissimum Educationis.

"Do not be afraid to be yourselves. Will they criticize you? Yes, but be yourself, original, creative, (inscribing) your own personality in art," he said.

The contest invited people between the ages of 16 and 35 to produce new songs inspired by Christmas and its values: life, love, peace and light, according to the initiative's website, christmascontest.it/en/. Contestants were competing in three categories: lyrics, music and interpretation. The best three pieces will be performed during the 2022 edition of the annual Christmas concert at the Vatican.

Given the theme of their current endeavor, the pope told the young artists, "Do not repeat the clichés of a fake and corny Christmas that has nothing to do with the birth of Jesus in Bethlehem and its meaning for humanity today."

Above all, he said, their work must be based on a sense of wonder, amazement and awe.

"We have lost the sense of awe and we must regain it," he said.

Christmas amazement is rooted in the unthinkable, he said: "a God who became flesh, who became a helpless baby, born of a virgin, in a grotto and whose cradle was a manger for animals. Awe. If one does not feel awe, the song does not speak to the heart, it does not communicate."

"With this creative style of amazement and simplicity, you can make your contribution to the cause of peace, which is the great gift God wanted to give the world with the birth of his son," the pope told them.

"In recent months, the thunder of war has been growing in Europe and the world," he said. "Let us not give in to this extortion, please! Let us not fall into this trap!"

"Let us continue to dream of peace and work for peace, sowing seeds of fraternity and social friendship" by always keeping one's hand outstretched to others, he added.

One way to do that is with music, which is "very valuable" as a universal language that "crosses borders and barriers," Pope Francis said.