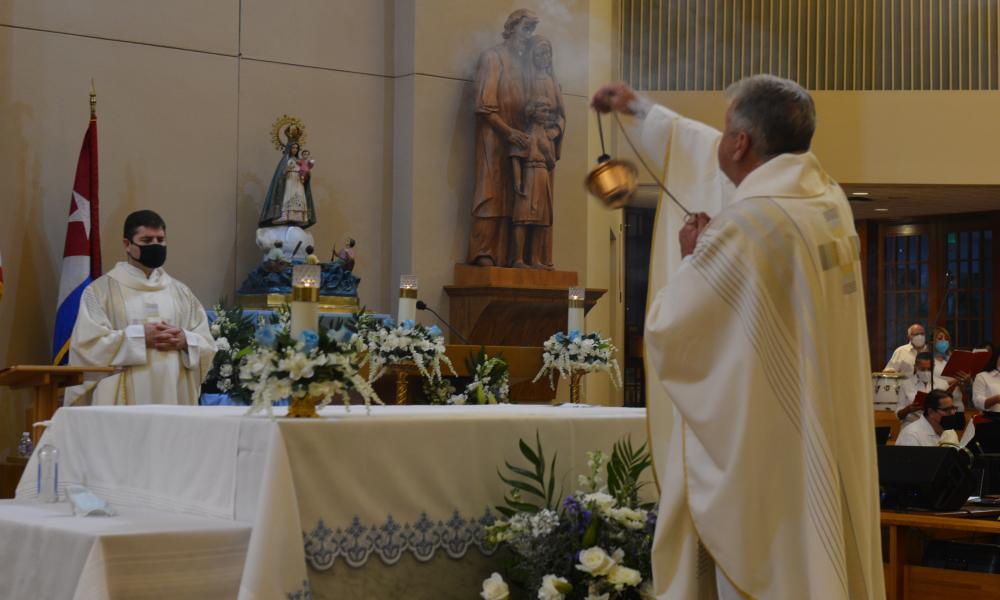 Cuban Community Gathers in Honor of Our Lady of Charity

The celebration of this Mass in honor of the patron saint of Cuba commemorated 59 years of devotion to Our Lady of Charity in the city of Tampa. It was in 1962 when Father Ruskin Piedra celebrated for the first time the feast of La Caridad at Our Lady of Perpetual Help Parish in Ybor City.

Father Hernandez referred in his homily to Mary's words at the wedding in Cana when she told the servers, "Do whatever he tells you." Cuba's history is painful. In the present time pain is also felt everywhere. But Hernández said, "We cannot wait for things to get better before we seek Jesus. We must live the totality of the present. Here and now, we must encounter Jesus. There is no point in us going out into the streets to protest if we do not experience a conversion in our hearts. The changes we pray for do not depend on the environment around us but on each one of us. You must ask with your heart. As Pope Francis told us, we will emerge better or worse from the pandemic; we will come out better if we act in solidarity, but we will come out worse if we act selfishly."

"Here and now we have to take Christ out of the drawer to encounter him. Instead of waiting for things to improve in the future. We must do it now!"

Father José González, who went to dwell with the Lord recently on August 23, 2021, was a strong supporter of this Mass. He coordinated the liturgy and invited the choir to the different parishes that hosted this celebration. Deacon Juan Sierra led the Organizing Committee of the Mass until his death in 2008. Since then, his wife María del Carmen Sierra and Father Ramón Hernández have overseen the Organizing Committee that plans the Mass, which has been celebrated every September 8 in several places such as Curtis Hixon Park and Incarnation Parish. Since 2011, the Mass has been celebrated at St. Lawrence Parish.