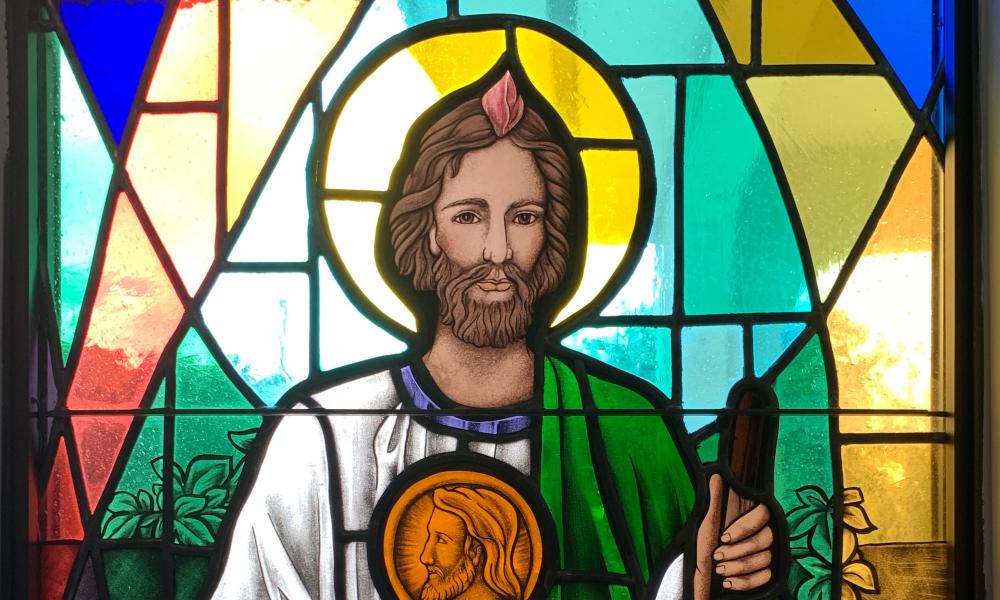 Why is St. Jude the Patron Saint of Lost Causes?

CNA | October 24, 2022 | He is believed to have written the Letter of Jude, one of the shortest books of the Bible, and is thought to have been martyred in Beirut, Lebanon, in around 65 AD. He is typically depicted with a club or axe, symbolizing the way he died, as well as with a flame above his head which refers to Pentecost.

Although Jude is not mentioned much in the Bible and only had one quote attributed to him in the Gospel of John (14:22), this quiet apostle is extremely popular among Catholics today. St. Jude’s popularity probably stems from his patronage of lost causes. An experience Jude had while in the city of Edessa is said to be the reason why St. Jude is associated with lost causes.

According to the ancient church historian Eusebius, while Jesus was still alive, the ruler Abgar V of Edessa was afflicted with an incurable and painful disease. He had heard of the miracles of Jesus and wrote him a letter requesting a visit. Jesus responded that he would send one of his disciples. After Jesus’ Ascension into heaven, Jude went to evangelize near the city of Edessa and went to visit Abgar. Jude laid his hands on the sick ruler and he was instantly healed.

Many people choose to carry the image of St. Jude on a medal or as a pendant on a necklace for comfort and call on him in their time of need and healing.

Patron Saint of the Diocese of St. Petersburg:

St. Jude the Apostle is also the patron saint of the Diocese of St. Petersburg. Our Cathedral is also named after St. Jude. Here’s how the name for the Cathedral was chosen:

On November 24, 1950, Father Paul Leo Manning was assigned to organize the sixth Roman Catholic parish in St. Petersburg. The name St. Jude the Apostle was suggested by one of the founding parishioners whose son had been severely injured in an automobile accident and was not expected to live.

Through his father’s novenas to St. Jude Thaddeus, the boy recovered completely.

The boy’s father spoke to Father Manning about honoring this little recognized Apostle-saint by naming the new parish after him. Father Manning agreed and presented the suggestion to Archbishop Joseph Hurley.

A Prayer to St. Jude

Most holy Apostle, St. Jude, faithful servant and friend of Jesus, the Church honors and invokes you universally, as the patron of difficult cases, of things almost despaired of, Pray for me, I am so helpless and alone.

Intercede with God for me that He brings visible and speedy help where help is almost despaired of. Come to my assistance in this great need that I may receive the consolation and help of heaven in all my necessities, tribulations, and sufferings, particularly -(make your request here)- and that I may praise God with you and all the saints forever. I promise, O Blessed St. Jude, to be ever mindful of this great favor granted me by God and to always honor you as my special and powerful patron, and to gratefully encourage devotion to you.