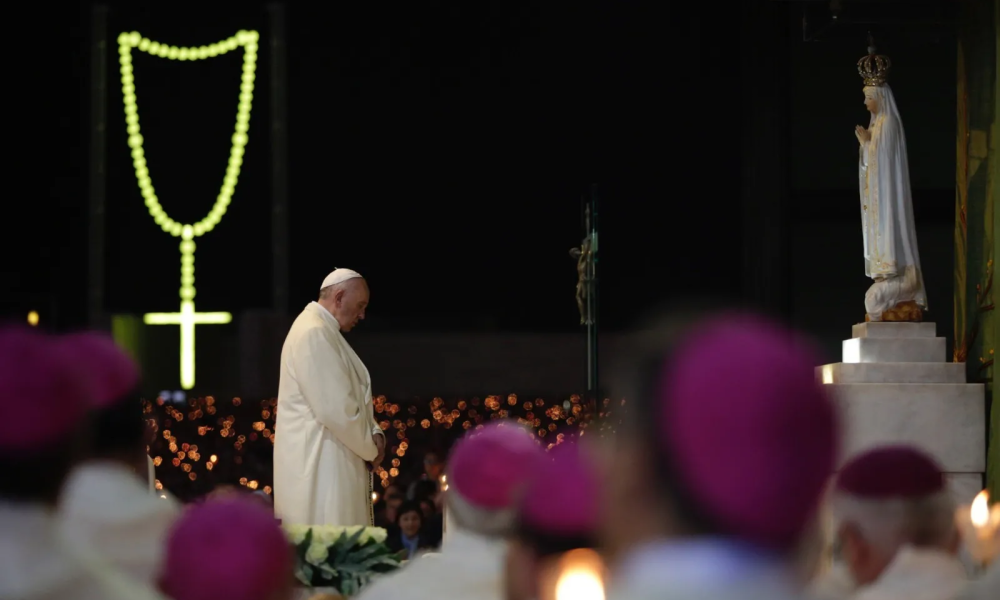 March 15, 2022 | (CNA) –Pope Francis will consecrate Russia and Ukraine to the Immaculate Heart of Mary later this month, the Vatican announced on Tuesday.

What does that mean exactly, and why is this significant? Here’s what you need to know:

“Consecration” means being set aside for a holy purpose.

You may or may not have heard of the concept of consecration before. A person— or nation— that is consecrated is set aside for a holy purpose. The word “entrustment” is often used synonymously with the word consecration.

The Vatican's Congregation for Divine Worship defines consecration to Mary as an overt recognition of the "singular role of Mary in the Mystery of Christ and of the Church, of the universal and exemplary importance of her witness to the Gospel, of trust in her intercession, and of the efficacy of her patronage."

Pope St. John Paul II— who consecrated the entire Church and world to Mary three times during his pontificate— taught that by consecrating oneself to Mary, we accept her help in offering ourselves fully to Christ.

Colin Donovan, vice president for theology at EWTN, told CNA that consecration "is an entrustment and also an appeal to God. The entrustment here is the fact that we lay ourselves, our hearts, our prayers, our desires at the feet of Our Lady, and that serves God's purposes because it elevates Our Lady in the mind of the Church, and hopefully in the mind in the world. And it's an appeal to God for our particular needs."

Michael O’Neill, author, EWTN television and radio host and creator of the website MiracleHunter.com, told CNA that Marian consecrations are important because “they signify our love and trust in Our Blessed Mother and we beseech her protection as her children in a special way.”

Mary specifically asked that Russia be consecrated to her Immaculate Heart.

The 1917 apparitions at Fatima are some of the world’s most famous Marian apparitions.

In the course of her appearances, Mary revealed three secrets, the second of which was a statement that World War I would end, as well as a prediction of another war that would start during the reign of Pius XI if people continued to offend God, and Russia was not consecrated to Mary’s Immaculate Heart.

Sister Lucia, one of the three Fatima visionaries, said that Mary told her: “If my requests are heeded, Russia will be converted, and there will be peace; if not, she will spread her errors throughout the world, causing wars and persecutions of the Church. The good will be martyred; the Holy Father will have much to suffer; various nations will be annihilated.”

“In the end, my Immaculate Heart will triumph. The Holy Father will consecrate Russia to me, and she shall be converted, and a period of peace will be granted to the world."

In the years following the revelation of the secret, there was some controversy as to whether various consecrations of Russia performed by subsequent popes fulfilled the requirements set forth by Mary.

But in a letter written in 1989, Sister Lucia confirmed that Pope St. John Paul II satisfied Mary’s request for Russia's consecration in 1984. At the time, Ukraine and Russia were both part of the Soviet Union.

Other authorities, including the Congregation for the Doctrine of the Faith, also have affirmed the consecration was completed to Sister Lucia's satisfaction.

Donovan said that both St. John Paul II "and the mystic, Sister Lucia, were at first uncertain because he hadn't mentioned Russia by name but by allusion ... however, she did confirm it with Our Lady, who said that yes, God had accepted it and he would keep his promise." He added that Sister Lucia confirmed multiple times, including in person, that Our Lady's request had been satisfied.

What is the Immaculate Heart of Mary?

The Immaculate Heart of Mary is an object of devotion, as it symbolizes her perfect will as expressed in her 'fiat'. Mary's heart is generally depicted with seven wounds and pierced by a sword. Early devotion to the heart of Mary was exemplified by Saint Bernard of Clairvaux, but the modern devotion was founded by Saint John Eudes, a French priest of the 17th century.

The feast of the Immaculate Heart of Mary was first observed by Eudes, and it began receiving papal approbation at the opening of the 19th century. The feast was placed on the General Roman Calendar in 1944, to be observed Aug. 22, the Octave Day of the Assumption.

Ukraine’s Latin Rite Catholic bishops requested that Pope Francis do the consecration, amid the invasion of their country.

Ukraine’s Latin Rite Catholic bishops— meaning the bishops who lead the country’s Roman Catholics— sent a letter to Pope Francis on March 2 asking him to “publicly perform the act of consecration to the Immaculate Heart of Mary of Ukraine and Russia, as requested by the Blessed Virgin in Fatima.”

Why consecrate Ukraine and Russia now?

Donovan said that "consecration is always a good thing," and that the ongoing war is "a context which is sufficient in and of itself" to warrant consecration.

The feast of the Annunciation is a prominent Marian feast, and, Donovan noted, the day especially recommended by Saint Louis de Montfort for personal consecration to Our Lady.

"All of Our Lady's prerogatives come from the fact that from all eternity, God chose her to be the mother of the Word made flesh; that is the that is the central Marian dogma of the Church," Donovan said, "so that is, I think that's the perfect day. And John Paul chose to do it on that day, and I think that's a good day for anyone to make their personal consecration, or for Pope Francis to do this one."

Russia has been consecrated before. So has the whole world, actually.

In the past, several popes have consecrated the entire Church and world to Mary.

Pope Francis during October 2013 renewed the consecration of the world to the Immaculate Heart of Mary, and dedicated his pontificate to Our Lady of Fatima.

Why is there so much controversy over the consecration of Russia?

O'Neill said that “With the current actions of Russia, some Catholics have questioned whether Russia has indeed converted and expected a longer duration and type of a period of peace. Since the message does not provide specifics as to what such a conversion and peace would look like, the debate has raged about whether the consecration was done properly and in an efficacious way.”

He added that devotion to Marian apparitions can have a downside.

“If someone finds themselves becoming distracted or confused or obsessed with miracles, they can safely be disregarded,” he said. “While there is plenty to be gained with honoring Mary under these titles and energizing one’s faith with reveling in such wonders that God has worked, if someone wanted to, they could still be a Catholic in good standing with the Church and not pay any attention to these devotions and events.”

While not speaking for individuals' motivations, Donovan considered that some of it is rooted in "taking seriously the message of Fatima." He added that setting aside the judgement of the Church, going to the text and saying the consecration wasn't done, "I think that holds God to a standard that ... he can't be generous."

"In his generosity God accepted this, and we saw the fruits in the five years following the [1984] consecration, of the fall of the Soviet Union and the restoration of the nation of Russia," Donovan reflected.