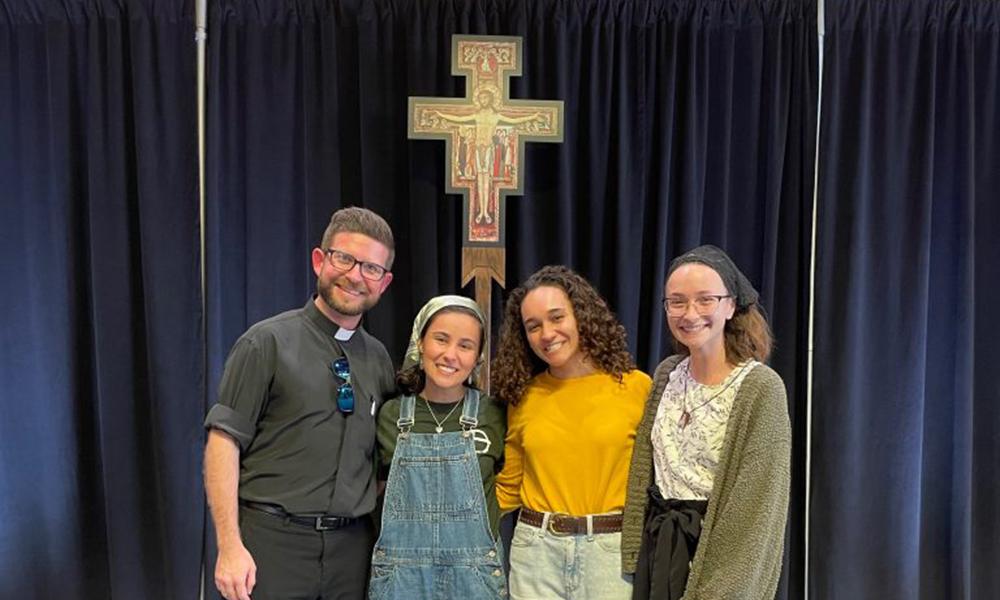 Only 10% of college students attend Sunday Mass, according to national statistics. USF’s Catholic Student Union (CSU) wants to reverse this national trend, reignite faith among Catholics and introduce the faith to seekers.

Amelia Becerra, the new vice president at USF’s Catholic Student Union, is ready for this challenge after attending a five-week training program at Saint Paul’s Outreach (SPO) in Minnesota. She described her experience as a “culture shock” as she adapted to intense prayer and community living.

“SPO has its own culture, day-to-day life, and living,” Becerra said. “We woke up at six in the morning every day to pray morning prayer together and we would have an hour of personal prayer after that, and then go right into our sessions. After the sessions we would have Mass and then free time until our dinners.”

Fellow Catholic Bull, Elizabeth Cottle, CSU president, also attended the training/internship and was inspired by the presence of the Holy Spirit in the people she encountered.

“The Holy Spirit is so present in these people,” Cottle said. “The way that they live is so charismatic and so free. The way they worship is so free.”

The two women said they want to introduce USF students to the immensely faithful way to pray they witnessed and to lead others in prayer for spiritual and physical healing.

“They pray over each other and with each other all the time about anything,” Cottle said. “If someone needs healing, like if someone hurt their wrist, everyone would pray over their wrist. Their faith was just amazing, and honestly we did witness a lot of healing because the faith was so strong.”

Becerra said she noticed a big theme at SPO is living in deep relationship and she hopes to foster this type of community at CSU.

“I think it would really set our community on fire,” Becerra said.

Cottle agrees that she would love to see close relationships forming at USF in a brotherhood/sisterhood bond.

With 2020 being a year of uncertainty, Cottle expressed feelings of concern initially, but after meeting the missionaries of SPO her mind was put at ease.

“I had my hesitations about this upcoming year because of this past year, but after meeting the missionaries that is what is making me so excited for this year,” Cottle said.

Catholic Campus Ministry at USF is made possible by the generosity of CSU Benefactors, and in part by donors of the Annual Pastoral Appeal. Learn more about the Catholic Student Union at USF here. Learn more about Saint Paul’s Outreach (SPO) here.