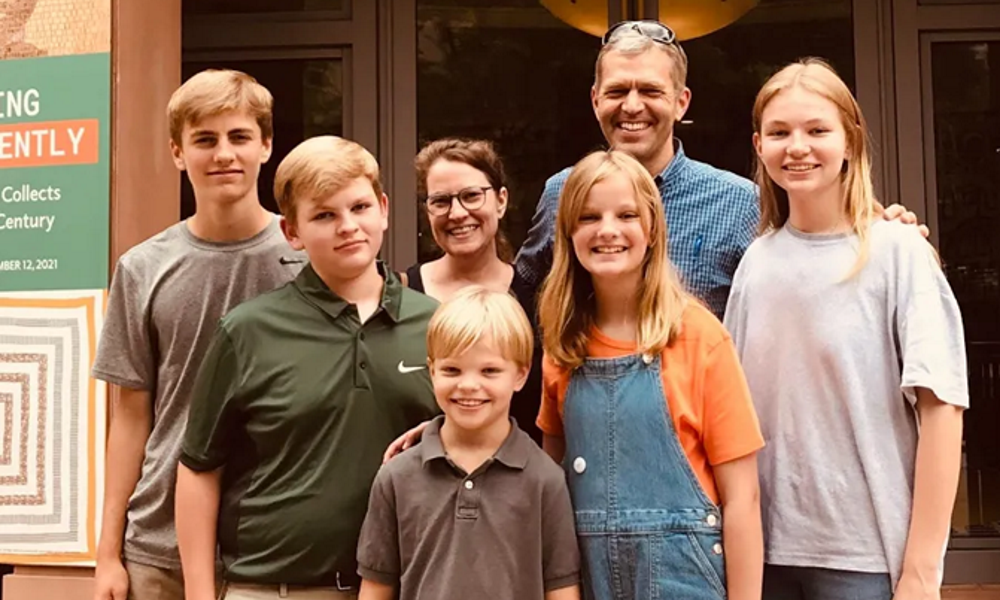 June 20, 2022 / (CNA) - A few years after getting married in the early 2000s, Soren and Ever Johnson were reflecting on Pope John Paul II’s call for the laity to play a greater role in the new evangelization and wondering how they could contribute.

John Paul II “was constantly saying, ‘if the laity take their obligation to spread the Good News seriously, there will be a new springtime for the Church in the third millennium,’” Ever said. “And he said it over and over and over again in so many different contexts it was hard not to feel responsible to do something.”

This was the origin of their ministries Trinity House Community and Trinity House Cafe + Market, based in Leesburg, Virginia. The mission, they say, “is to inspire families to make home a taste of heaven for the renewal of faith and culture.”

The Johnsons told CNA via video call this month that they are looking forward to being speakers at the World Meeting of Families 2022 in Rome, where they will give a 15-minute presentation on Saturday, June 25.

Soren and Ever met in 2000 in Kraków, southern Poland, “in John Paul II’s footsteps,” Soren said. They will celebrate 21 years of marriage in August and have five children aged 10 to 19.

When they met, Ever was working for George Weigel, the author of “Witness to Hope: The Biography of John Paul II.” She wanted to do more to engage Catholics and non-Catholics who might not otherwise be involved in parish life or encounter the ideas that the think tank was trying to promote.

“There’s only so long we can spend in the parish basement just enjoying our own company. Because this isn’t evangelization,” Ever said, commenting on their thought processes at the time. “You know, we’re having a great time and kind of encouraging each other and learning a lot, but there really wasn’t much exposure for people who weren’t already, you know, part of the choir.”

This pull to be more open to the wider community led them to open Trinity House Cafe + Market in 2014.

“Our location is at the intersection of Church and Market streets, and we’re right across from the courthouse, so it’s a really amazing location to just be this Christian presence in the community,” Ever explained.

The Johnsons said the coffee shop also hosts community events and has been a way for Christians and non-Christians to engage with each other in an open and welcoming environment.

The idea, Soren said, is to “lead with beauty in the public square. Give [people] a taste of heaven, give them a taste of hospitality, a welcoming environment where people feel listened to, they feel served and they see the beauty of the Church — not in your face, but it’s there if you want to go deeper.”

“And over these eight years, we’ve seen just amazing stories of people coming back to the faith,” he said.

The Johnsons also see hospitality and outward service as important aspects of family life, which is why they are the focus of the final “level” of a framework the couple created for helping families to increase their communion with God and with each other.

Modeled on the Holy Trinity, Ever said, “if you want to be like the Persons of God, the whole point is to be outflowing. Like producing so much grace within your family that you have more than enough to go around for what the family members need.”

“Because it involves God, in his infinite grace, [it] spills over and provides for anyone else who comes your way as well,” she said.

At the 10th World Meeting of Families, taking place on June 22-26 at the Vatican, the Johnsons will speak about discernment in daily family life.

“The way we look at it is, discernment is all about being attentive to God’s voice amid the chaos and joy of family life,” Soren said. “So in our talk, we’re going to present a framework for how parents can create an atmosphere in their homes of good discernment.”

“We will point to how each family is a communion of persons, an image of the Trinity. So we’re going to point to how the heart of discernment is following the Lord’s voice and deepening that communion as a family,” he said.

The World Meeting of Families (WMOF) was created by Pope John Paul II in 1994 and has been held typically, every three years, and in different places around the world.  The event includes an international Theological-Pastoral Congress at the start and ending, in the presence of the Pope, with a vigil and Festival of Families, along with a final Eucharistic celebration. This year’s theme: “Family Love: Vocation and Path to Holiness” puts families at the center of pastoral attention and will reflect on family spirituality and the call to holiness.

Catecheses have been designed to accompany parishes/ministries/families on a spiritual journey to prepare for the 10th World Meeting of Families, in Rome, June 22-26.

View the World Meeting of Families

EWTN will air following programs to engage as many families as possible and allow for local celebrations, be it at home or in the parish. Pope Francis is inviting everyone to join in this important event, either in person or virtually (schedule below).

EWTN can be viewed on cable, satellite, streaming devices and also on our website (https://www.ewtn.com/tv/watch-live) or via the free EWTN app on mobile devices. 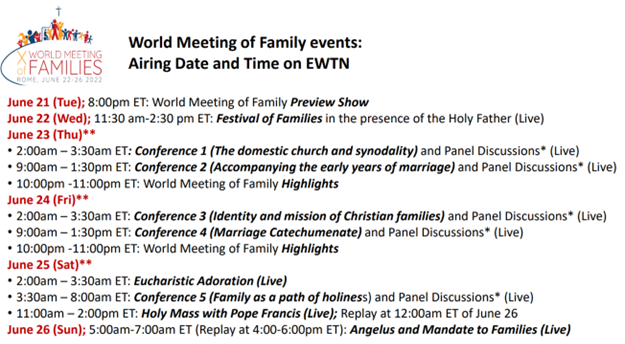 *For the individual title of the Panel Discussions, please refer to the website in Rome: https://www.romefamily2022.com/en/programma/

**The events will be covered live and will follow Rome’s time zone. It might be best to record the programs to be able to access it later.