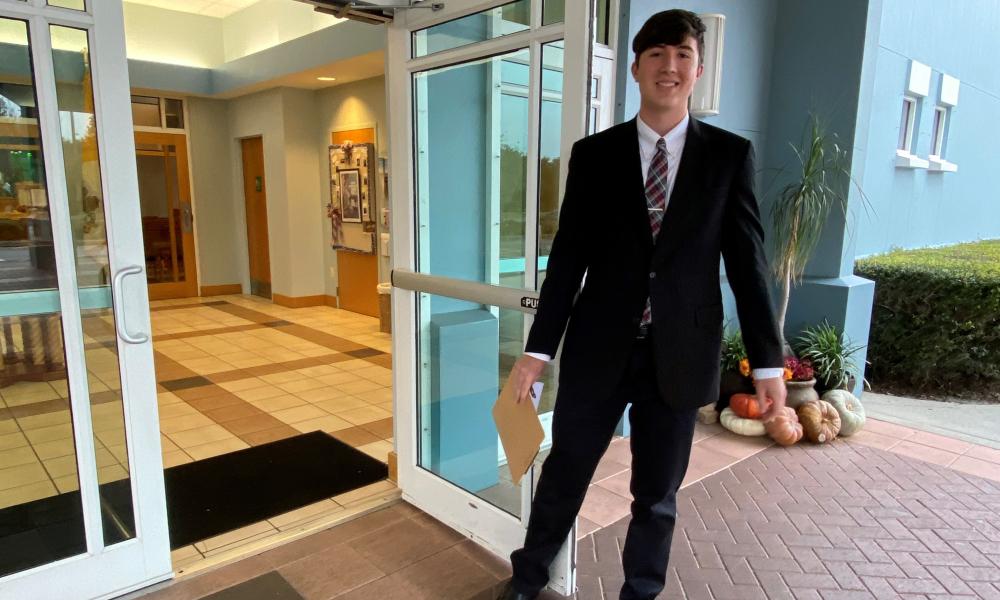 For the past seven years, Steven has been greeting and seating parishioners of Our Lady of the Rosary Parish, in Pasco County as part of the Usher Team. During that time, he has grown a lot. Not just in his role as an usher but, from a small boy into the six-foot-four young man he has become.

“I've been at it since I was ten. It was either alter serving or ushering. I had major stage fright and wanted to be behind the scenes. I thought ushering looked cool and decided to ask if I could help out,” said Steven.

Now 17, he leads a team of ushers for the parish’s 5 p.m. Mass. He credits his leadership skills to what he’s learned through his youth group called Mark 8.

“I’ve learned time management. I have also been pushed out of my comfort zone. They really inspire me to be the best I can be and I'm grateful for that,” said Steven.

The group is made up of parish teenagers who meet every Sunday to learn about the importance of being servant leaders and to grow deeper in their faith.  The teens often gather for Adoration of the Blessed Sacrament to stay close to Christ.

“They are just in love with adoring the Lord and taking part in a few Holy Hours together. We have been able to pray together about how we can be servant leaders like the first apostles,” said Michael Troeller, Director of Youth Ministry at Our Lady of the Rosary.

For Steven, growing in his faith is the most important aspect of being involved in parish ministry since a young age.

“If you surround yourself with a bunch of good Catholics, which I've done, you really get closer to God,” said Steven.

As he prepares his teams for the busy Advent and Christmas season, Steven wants Catholic teenagers to know they too can benefit from being a servant leader. They just need to figure out what role they’re best suited to fill.

"I think it's really important for teenagers to help out. Dive headfirst, don't worry about it. Just do what you think God is telling you to do, no hesitation,” said Steven.

It’s a sentiment his youth minister shares, “Now more than ever, it is imperative that young adults, teens, and even the youngest among us are taught and put into positions of servant leadership. Think of Gideon, Joseph, Esther, or David from the Bible and you can see that God has always chosen the young to represent, to lead his people,” said Troeller.