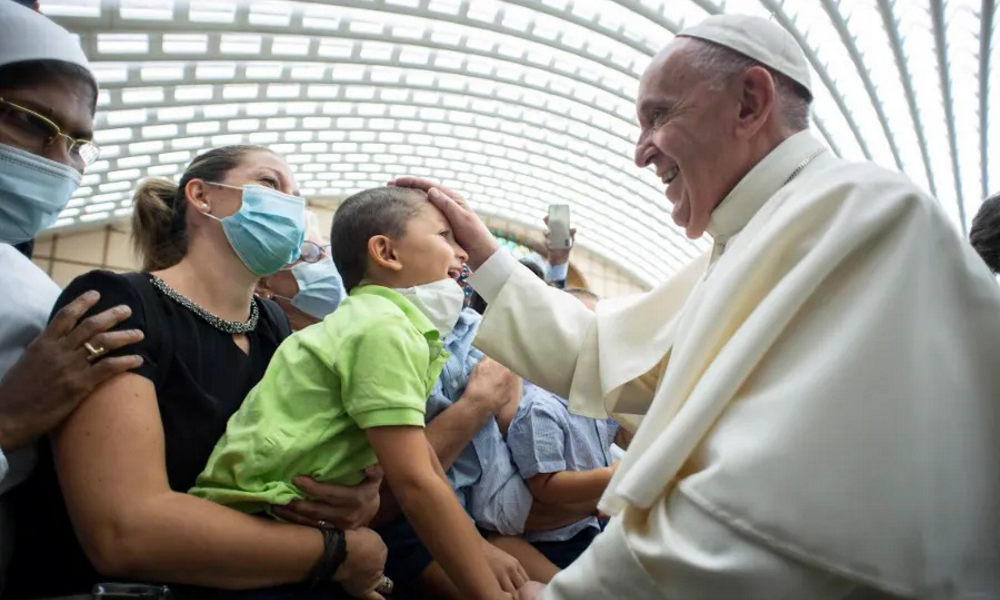 Synodal Process Is Not About ‘Gathering Opinions,’ but ‘Listening to the Holy Spirit’

Sep 18, 2021 / (CNA) - Pope Francis said that the two-year process leading to the 2023 synod on synodality is not about “gathering opinions,” but “listening to the Holy Spirit.”

Addressing Catholics from the Diocese of Rome on Sept. 18, the pope noted that preparations for the synod would take place in three phases between October 2021 and October 2023.

He said that the process sought to create “a dynamism of mutual listening” at all levels of the Church.

“This is not about gathering opinions, no. This is not an inquiry; but it is about listening to the Holy Spirit,” he said.

The Vatican announced in May that the synod on synodality would open with a diocesan phase lasting from October 2021 to April 2022.

A second, continental phase will take place from September 2022 to March 2023.

The third, universal phase will begin at the Vatican in October 2023 with the XVI Ordinary General Assembly of the Synod of Bishops, dedicated to the theme “For a Synodal Church: Communion, Participation, and Mission.”

The speech was one of his most extensive reflections on the theme of “synodality,” a concept at the heart of his pontificate.

At one point, he apologized for the length of his speech, but said it was necessary as “the synod is a serious thing.” The audience responded with applause.

The pope outlined his vision and hopes for the synod, which some Vatican commentators have described as the most significant Catholic event since the Second Vatican Council in 1962-65.

He said that, as Bishop of Rome, he considered it vital that the Diocese of Rome committed itself “with conviction” to the synodal process.

Smiling, he said it would be an “embarrassment” if his own diocese did not embrace the initiative.

“The theme of synodality is not a chapter in a treatise on ecclesiology, much less a fad, a slogan, or a new term to use or instrumentalize in our meetings. No! Synodality expresses the nature of the Church, its form, its style, its mission,” he explained.

“And so we speak of a Synodal Church, avoiding, however, to consider that it is just one title among others, a way of thinking about it that foresees alternatives.”

The pope said that this wasn’t simply a “theological opinion” or merely a “personal thought,” but rather the blueprint for the Church contained in the Acts of the Apostles, which shows the early Christian community “walking together.”

He reflected on episodes from the New Testament book, which showed how the first Christians resolved their seemingly irreconcilable differences by gathering together to make decisions.

He repeatedly emphasized the Holy Spirit’s leading role in decision-making.

He said: “There will always be discussions, thank God, but solutions are to be sought by giving the word to God and his voices in our midst; by praying and opening our eyes to all that surrounds us; by practicing a life faithful to the Gospel; examining Revelation according to a pilgrim hermeneutic that knows how to preserve the path begun in the Acts of the Apostles.”

“And this is important: the way of understanding, of interpreting. A pilgrim hermeneutic, that is, one that is on the move. The journey that began after the Council? No. It began with the first Apostles and continues.”

Describing how the faith is passed on from one generation to the next, the pope quoted the composer Gustav Mahler as saying that fidelity to tradition does not consist of “the worship of ashes but the preservation of fire.”

He said: “You see how our Tradition is a leavened dough, a reality in ferment where we can recognize growth, and in the dough, a communion that is implemented in movement: walking together realizes true communion.”

The pope stressed the importance of the diocesan phase of the synodal process. Earlier this month, the Vatican released a preparatory document and handbook to help dioceses worldwide to take part.

The pope said the initial phase was critical because it sought to involve “the totality of the baptized.”

“There are many resistances to overcome the image of a Church rigidly distinguished between leaders and subordinates, between those who teach and those who must learn, forgetting that God likes to overturn positions,” he commented.

He continued: “The exercise of the sensus fidei [sense of the faith] cannot be reduced to the communication and comparison of opinions that we may have regarding this or that theme, that single aspect of doctrine, or that rule of discipline.”

“No, those are instruments, they are verbalizations, they are dogmatic or disciplinary expressions. But the idea of distinguishing majorities and minorities must not prevail: a parliament does that.”

The pope then meditated on the meaning of the phrase “people of God,” a major theme of Vatican II’s Dogmatic Constitution on the Church, Lumen gentium.

He said that belonging to the people of God was not a matter of “exclusivity” but of receiving a gift that comes with the responsibility to witness to God.

“Why do I tell you these things?” he asked. “Because in the synodal journey, listening must take into account the sensus fidei, but it must not overlook all those ‘presentiments’ embodied where we would not expect them.”

The Holy Spirit, he said, knows no boundaries and parishes should therefore be open to all and not limit themselves “to considering only those who attend or think like you.”

Concluding his address, Pope Francis urged members of Rome diocese to play an active role in the synod’s preparations.

“It will be good for the Diocese of Rome and for the whole Church, which is strengthened not just by reforming structures -- that is the great deception! -- by giving instructions, offering retreats and conferences, or through directives and programs -- this is good, but as part of something else -- but if it rediscovers that it is a people that wants to walk together, among ourselves and with humanity.”

He added: “But it is necessary to get out of the 3-4% that represents those closest to us, and go beyond that to listen to the others, who will sometimes insult you, they will chase you away, but it is necessary to hear what they think, without wanting to impose our things: let the Spirit speak to us.”