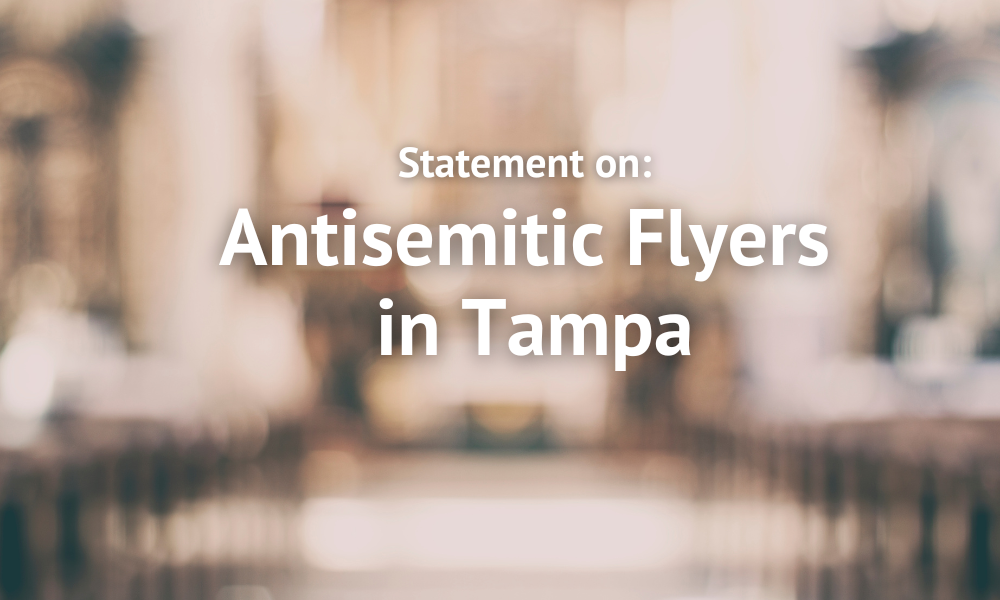 Statement on Antisemitic Flyers in Tampa

The Center for Catholic-Jewish Studies condemns the antisemitic flyers found in Tampa neighborhoods over the last three weekends. The flyers espouse discredited antisemitic conspiracy theories. Hundreds of Tampa residents found the flyers on their porches, yards, and driveways. The Tampa Police and the FBI are investigating the distribution of the flyers.

Similar flyers have been distributed in cities across Florida. According to the Anti-Defamation League, antisemitic incidents are at an all-time high throughout the country in general and in Florida especially.

It is important at this time to offer words of support to our Jewish neighbors, as well as to recall that the Catholic Church “decries...displays of anti-Semitism directed against Jews by anyone and at any time (Nostra Aetate 4).” In his February 9, 2017, address to the Anti-Defamation League, Pope Francis stated that the Catholic Church “feels particularly obliged to do all that is possible with our Jewish friends to repel anti-Semitic tendencies.” Additionally, the Church teaches that “God holds the Jews most dear” (Nostra Aetate 4) and that the Jewish people “carry to the whole world a witness - often heroic - of fidelity to the one God (Notes 1985 sec. VI)."

The CCJS was founded on the teachings of Nostra Aetate. Since all human persons are created in the image of God, “No foundation…remains for any theory or practice that leads to discrimination between man and man or people and people, so far as their human dignity and the rights flowing from it are concerned (Nostra Aetate 5).” We encourage members of the Catholic community to show solidarity with our Jewish neighbors by sending messages of support, and learning about the danger of antisemitic conspiracy theories.

The presence of antisemitism in our society is not only a threat to the Jewish community. As Saint Pope John Paul II said, antisemitism is "a sin against God and humanity" (Address to Representatives of the Jewish Community, August 8, 1991). And it goes against everything we stand for as Americans.

The CCJS is committed to promoting mutual respect, knowledge, and understanding through dialogue, study, and teaching.