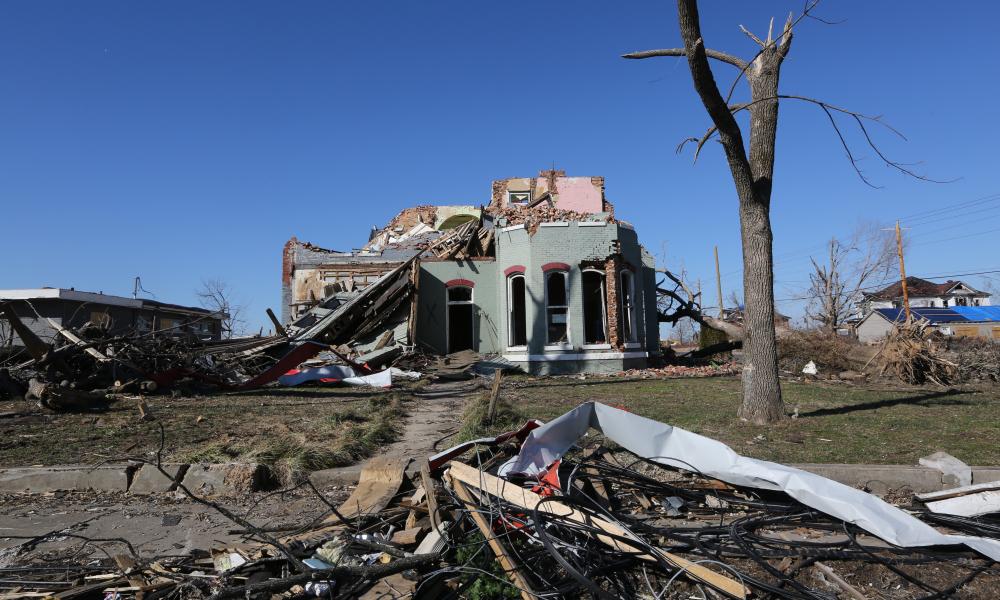 Recovery, Rebuilding Are the Focus for Kentucky Tornado Victims

Diocese of Owensboro Is Thankful for Monetary Donations

Editor’s Note: Earlier this year, Gulf Coast Catholic reported that the Diocese of St. Petersburg donated $100,000 to the Diocese of Owensboro for tornado relief efforts.

March 15, 2022 (CNS) -- Shortly after he was ordained the fourth bishop of the Diocese of Owensboro, Bishop William F. Medley learned that his rural diocese had managed to gather more than $240,000 in a special collection for the survivors of the devastating January 2010 earthquake in Haiti.

Bishop Medley has long considered that special collection to be one of the most powerful examples of Catholics in western Kentucky reaching out to help others.

He never imagined his own diocese would one day be the recipient of a similar kindness.

Eleven years later, a series of tornadoes raged across Kentucky and surrounding regions during the night of Dec. 10. Western Kentucky alone suffered the loss of 80 lives from the tornadoes, which traveled approximately 200 miles in what has been declared the worst tornado event in state history.

Two Catholic churches within the Diocese of Owensboro were impacted: St. Joseph Parish's church in Mayfield lost its bell tower in the storms, and the church building of Resurrection Parish in Dawson Springs was severely damaged and expected to be a total loss.

That's not to mention the many people of western Kentucky who lost homes entirely or whose houses and apartments were damaged enough to render them uninhabitable.

Bishop Medley said that "having never been in this situation before," he was unsure what was going to happen or how his people would ever recover from the disaster.

On Saturday morning, the day after the storms, the bishop released a message to the diocese requesting prayers and a special collection that weekend for those impacted.

"The Diocese of Owensboro, through our Catholic Charities office, would like to offer immediate help and services for those who are displaced or who have immediate emergency financial aid," wrote the bishop in his Dec. 11 letter.

Parishes quickly took up the collection for their neighbors, but then donations began flooding in from outside the diocese as well. The city of Owensboro itself was unscathed by the storms, and the McRaith Catholic Center in Owensboro, home to diocese's central offices, began receiving phone calls and online donations around the clock.

Over the next few weeks, the diocese's finance office was "just overwhelmed" by the sheer magnitude of donations coming in, Bishop Medley told The Western Kentucky Catholic, the diocesan newspaper.

Catholic Charities of the Diocese of Owensboro, led by director Susan Montalvo-Gesser, traveled out to the impacted communities to assist with immediate relief efforts.

Catholic Charities was able to use the donated funds to purchase quantities of gift cards which they in turn distributed to the parishes in affected areas. From there, pastors and parish volunteers could provide direct assistance to those who needed help purchasing basic necessities.

Five days after the storms, coincidentally on Bishop Medley's 12th anniversary of his appointment as bishop of Owensboro, he drove 400 miles to visit the various impacted communities within his region.

Several days after that, he rode in a small plane across the paths of the tornadoes, carrying the Blessed Sacrament in a monstrance and blessing all below.

Three months have now passed since the storms.

As of March 15, more than $8 million has been received in donations from more than 6,100 donors. This includes $1,755,616 contributed by 24 dioceses and archdioceses around the United States; $394,000 contributed from within the Diocese of Owensboro itself; and $1,892,395 contributed by Catholic Charities USA.

Approximately $4 million has been contributed by donors outside the diocese -- including but not limited to individuals, businesses, foundations, religious communities, organizations such as the Knights of Columbus and Catholic Extension, and parishes and schools outside the diocese.

Catholic Charities of the Diocese of Owensboro needed to hire several more staff members as it became the operations base for tornado relief in western Kentucky.

Working with Archbishop Joseph E. Kurtz in Louisville, Kentucky, it also has expanded its efforts beyond diocesan boundaries to help four counties within the archdiocese that were impacted by the tornadoes.

To date, the agency has spent more than $280,000 in helping with immediate needs, housing and rental assistance, food and gift cards.

"Now our efforts are to help people recover and rebuild," said the bishop, and added that Montalvo-Gesser has a goal to rebuild 350 homes in the next two-to-four years.

Bishop Medley said that because "there is a new humanitarian crisis -- the crisis in Ukraine," he is asking the people of western Kentucky to remember those suffering amid the Eastern European turmoil.

Specifically, he has asked pastors to hold special collections for humanitarian assistance in Ukraine over the next few weeks.

"We have received; now let us respond to others in need," he said.

Caption: Debris surrounds a destroyed home in Mayfield, Ky., March 1, 2022, weeks after a tornado ripped through the small town. More than 30 tornadoes were reported across six states late Dec. 10, 2021, and early Dec. 11, killing dozens of people and leaving a trail of devastation. (CNS Photo/Bob Roller)