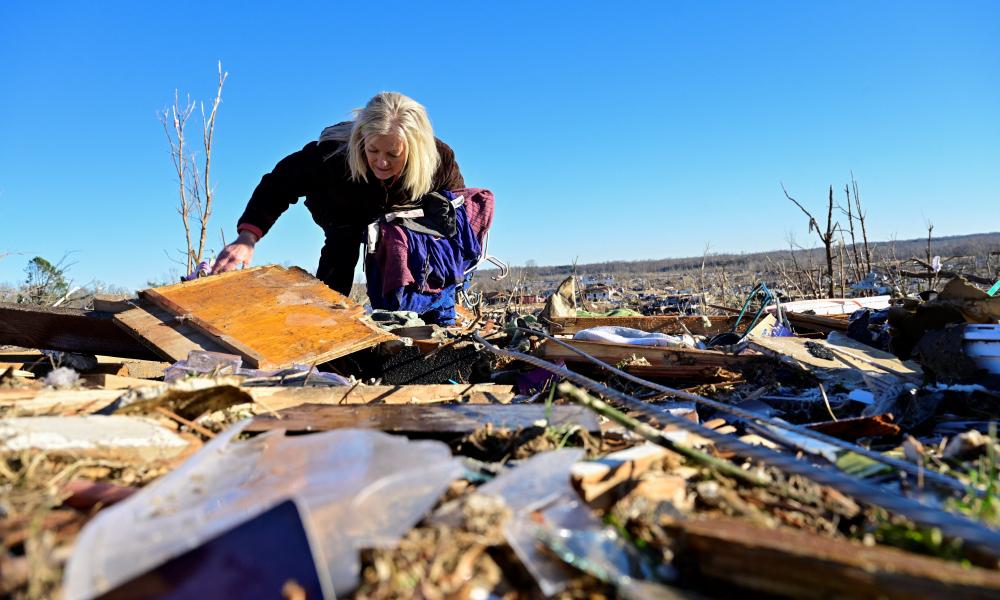 December 13, 2021 / (CNA) - Pope Francis prayed on Monday that God would give gifts of strength and perseverance to rescue workers and all those affected by tornadoes which struck the South and Midwest of the United States Dec. 10-11.

“The Holy Father was saddened to learn of the devastating impact of the tornadoes that struck the central and southern United States in these days,” said a Dec. 13 telegram to Archbishop José H. Gómez of Los Angeles, president of the U.S. bishops’ conference.

The message, signed by Vatican Secretary of State Cardinal Pietro Parolin, said Pope Francis “offers heartfelt prayers that Almighty God will grant eternal peace to those who have died, comfort to those who mourn their loss, and strength to all those affected by this immense tragedy.”

A series of tornadoes and storms in Arkansas, Illinois, Kentucky, Mississippi, Missouri, and Tennessee caused power outages, destroyed homes and businesses, and killed dozens of people.

“With gratitude for the tireless efforts of the rescue workers and all engaged in caring for the injured, the grieving families and those left homeless, Pope Francis invokes upon all engaged in the massive work of relief and rebuilding the Lord’s gifts of strength and generous perseverance in the service of their brothers and sisters,” the pope’s message to U.S. bishops said.

Some states are still trying to get an accurate count of the number of deaths as relief workers continue to search the wreckage for missing people on the third day of the emergency response.

According to the Washington Post, Kentucky Gov. Andy Beshear said the death toll in his state, which was the hardest hit, could be somewhere from 50 to 100 people or more.

Nearly 90,000 homes and businesses in parts of Kentucky and Tennessee are without power days after the disaster.

Pope Francis also said he was praying for victims during his Angelus address on Sunday.

“I also pray for the victims of the tornado that hit Kentucky and other areas of the United States of America,” he said Dec. 12.

The pope spoke about the tragedy after two U.S. archbishops offered their condolences to victims.

Archbishop José H. Gomez, president of the U.S. Conference of Catholic Bishops, and Archbishop Paul S. Coakley, chairman of the Committee on Domestic Justice and Human Development, urged Catholics to help those affected by supporting the work of Catholic Charities USA.

“It is heartbreaking to see the destruction and devastation brought by the tornadoes that tore through the South and Midwest overnight,” the archbishops of Los Angeles and Oklahoma City said in a Dec. 11 statement.

“May those who have been impacted by these storms find peace, comfort, and hope in our faith and in God’s endless love.”

A bishop in Kentucky asked for prayers on Dec. 11.

“Let us ... unite in prayer as a Catholic community for all of the suffering that was caused by this disaster,” said Bishop William Medley of the Diocese of Owensboro.

Photo Caption: Laura Croft searches through debris Dec. 13, 2021, in Dawson Springs, Ky., near the location where her mother and aunt were found dead after tornadoes ripped through several states.