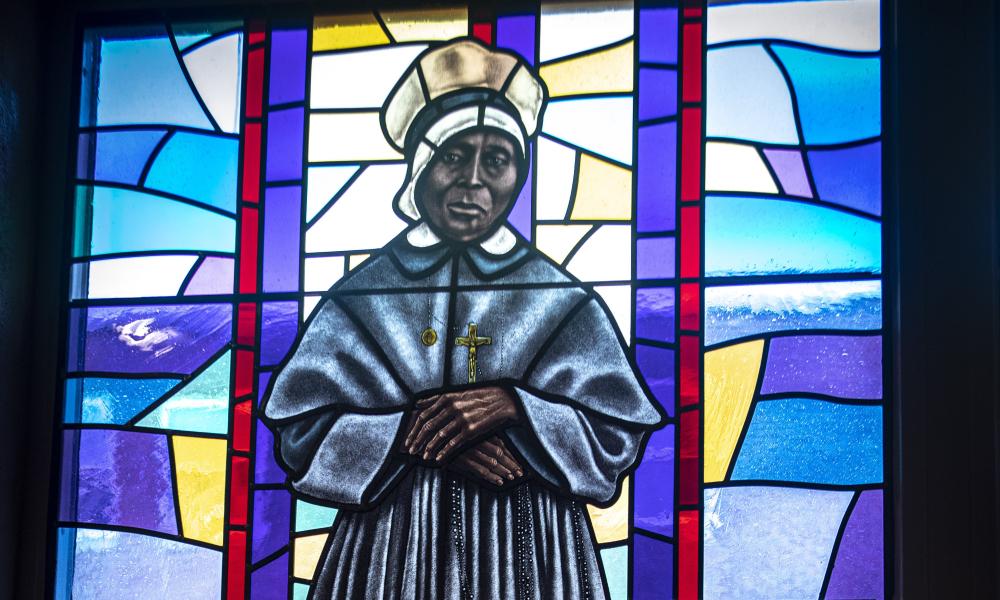 April 5, 2022 | (CNS) -- Mother Mary Lange, who founded the first Black Catholic school in the United States and the first religious order for women of color, is an example of courageous resilience the church needs, say members of her order, the Oblate Sisters of Providence.

"We really need this woman in our lives right at this point," said Oblate Sister Magdala Gilbert, the 91-year-old director of the Mother Mary Lange Guild, the group promoting the sainthood cause of Mother Lange.

Sister Magdala describes the foundress, who died in 1882, as "her own woman and … a no nonsense woman," who did what she knew she had to do.

What she felt she had to do, as a Black woman in Maryland, which was still a slave state in the 1800s, was no easy task. Mother Lange, who was born in Cuba to Haitian parents, came to America around 1813 and immediately got to work helping other French-speaking Catholics in the Baltimore area.

She started educating Black Catholic children right in her home with another woman when the education of slaves was outlawed. This eventually grew to the still-running St. Frances Academy and led to her founding a religious order -- with four Black women at the time -- dedicated to educating children that later expanded its ministry to also caring for the sick and elderly.

Today, the sisters still care for children with a child development center and reading and math center on the property of their motherhouse in Catonsville, just outside of Baltimore.

There are about 80 Oblate sisters based in Maryland, Florida, New York and Costa Rica. In early February, they marked the 140th anniversary of Mother Lange's death with a special Mass at their motherhouse.

But the sisters hardly need a special event to remember their foundress, whose image -- an aged black and white photograph of the saint with a stern expression and wearing a traditional habit -- hangs above the convent's chapel doors and in various spots throughout the brick building. This same image is on display in the Mother Mary Lange Catholic School, which opened in 2021 in Baltimore.

Sister Magdala also wore the image on a lapel pin when she spoke with Catholic News Service in February. She joined the order 73 years ago, "sight unseen," because she wanted to be a woman religious and her parish priest in Beaumont, Texas, recommended the Oblates.

"I hadn't seen an Oblate, hadn't heard about an Oblate, didn't even know the sisters existed. But I came because this is what God wanted me to do," she said before adding: "And if I had to do it again, I'd do it again."

Since 2013, her work with Mother Lange's cause has kept her busy every day. The former teacher and librarian keeps up with those who have written to the Mother Lange Guild around the world and encourages people to pray for Mother Lange's canonization and her intercession for a miracle.

"I admire her because she didn't let anything get in her way," Sister Magdala says, adding that Mother Lange "just went around and did something to overcome what was being thrown at her," something Sister Magdala takes to heart as she deals with health issues and uses a walker or electric scooter to get around.

When asked why this canonization is important right now, she said she believes Mother Lange, along with the five other U.S. Black Catholics currently being considered for sainthood, "would be a catalyst to move people" to have hope for change.

Knowing "she did what she did, then there's hope for everyone else," she said.

Sister Magdala's work has not gone unnoticed. In February, for Black History Month, she was named as one of "25 Black Marylanders to Watch" by the Baltimore Sun newspaper.

The sisters appreciate any attention they can draw to their cause. Oblate Sister Marcia Hall, vocational director for the Oblates, said there are "still people that don't know us ... which means they don't know who Mother Lange is."

"We were founded in 1829 and we are still here," she said, adding that the sisters have persevered through many things, "but here we are."

And in recent years they have persevered in seeing through this sainthood cause, which Sister Marcia noted has taken time because Mother Lange was not a prolific writer and other evidence about her is not easily obtainable.

It's taken a long time, she said, but she also said things could change in the near future, which she is hoping happens before the order's 200th anniversary.

The beatification ceremony would take place in Baltimore and she said anyone in the area would likely hear the shouting at the motherhouse because "there would be a big party."

In the meantime, they pray and wait. "We're women of Providence, so we leave that in God's hands," Sister Marcia said.

Caption: An image of Mother Mary Lange, foundress of the Oblate Sisters of Providence, is seen in a stained-glass window in the chapel of the religious order's motherhouse near Baltimore Feb. 9, 2022. (CNS Photo/Chaz Muth)