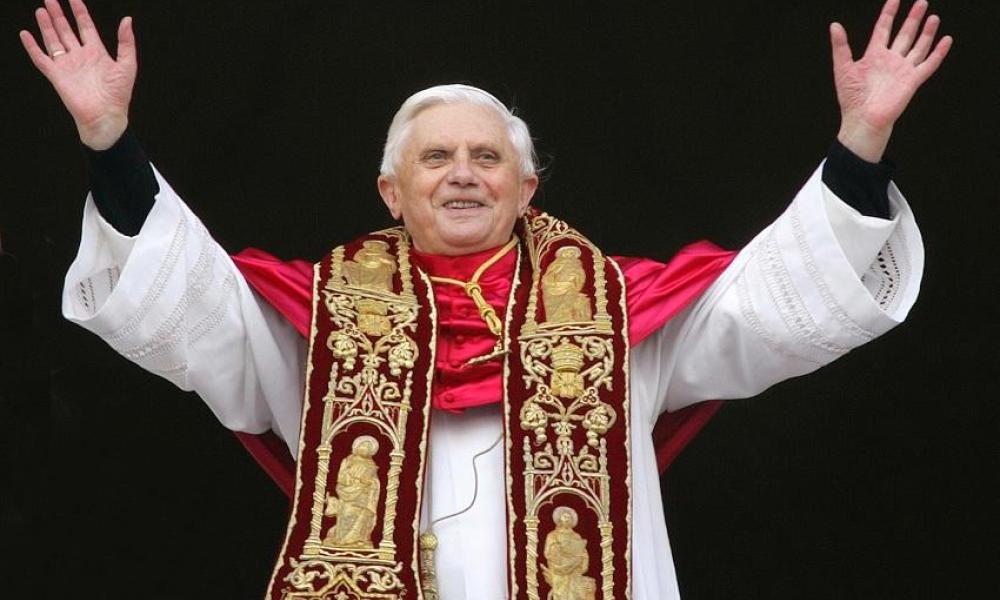 Pope Benedict XVI, elected pope April 19, 2005, waves from the balcony of St. Peter's Basilica in the Vatican after he was announced as the 265th successor of Saint Peter by Papist/Flicker Commons

Pope Emeritus Benedict XVI passed away in the Lord on Saturday, December 31, 2022 at the Mater Ecclesiae Monastery in the Vatican, which the 95- year-old Pope emeritus had chosen as his residence after resigning from the Petrine ministry in 2013.  His death was a result of advanced age.

Pope Emeritus Benedict was born, Joseph Aloisius Ratzinger on April 16, 1927, in Marktl Am Inn, Bavaria, Germany.  He was the youngest of three children born to Joseph Ratzinger, Sr., a police officer, and Maria (Peintner) Ratzinger.

Joseph Ratzinger studied philosophy and theology at the University of Munich and, along with his brother, Georg, was ordained to the priesthood at Freising, Germany, on June 29, 1951.  He pursued ministry as an academic, establishing himself a renowned theologian. While a professor at the University of Münster, he was selected as a peritus (theological expert) to the Second Vatican Council. He attended the Council with then Bishop Karol Wojtyla— later Pope John Paul II.  In May of 1977, Pope Paul VI appointed Father Joseph Ratzinger Archbishop of Munich. One month later, in an unusual move, the Pope created Archbishop Ratzinger a Cardinal.

On April 19, 2005, following the death of John Paul II, Cardinal Ratzinger was elected as the 265th Supreme Pontiff. He selected the name “Benedict,” in honor of Pope Benedict XV, who served as Supreme Pontiff during World War I. At age 78, Ratzinger was the oldest man to be elected to the papacy since Pope Clement XII in 1730. Benedict's election marked the first time there were two consecutive non-Italian Pope since the Avignon papacy during the 14th Century.

Pope Benedict is remembered for his teaching on the importance of friendship with Christ, his defense of Christian morality against relativism, promoting the integration of faith and reason, and his teachings on the theological virtues of faith, hope, and love.

On February 11, 2013 Benedict XVI announced that he would resign from the Papal Office, effective February 28, 2013. He was the first pope to resign since Gregory XII in 1415 and the first to do so without external pressure since Celestine V in 1294.  At the time of his resignation, Benedict was the fourth oldest pope, at 85 years, 318 days.  After his resignation, Pope Emeritus Benedict resided in Mater Ecclesiae Monastery, a former convent, in the southwest corner of Vatican City.

Eternal rest grant unto him, O Lord, and let perpetual light shine upon him. May his soul and the souls of all the faithful departed, through the mercy of God, rest in peace. Amen