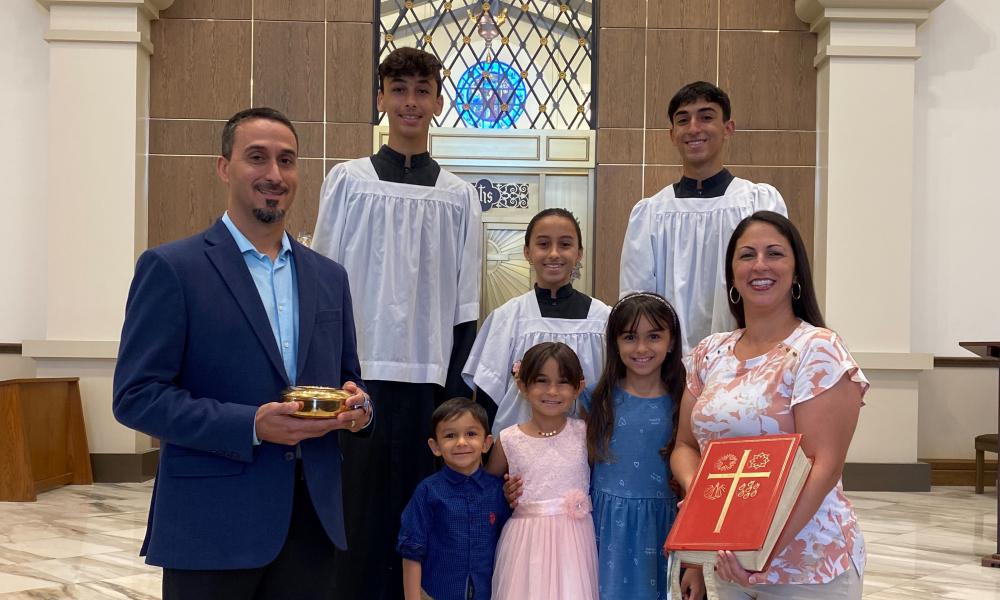 Mom Joins Ministry After a Challenge From Her Son

Caption: Carmen and Anthony Rivera are shown with their six children at St. Stephen Parish in Riverview. Courtesy photo.

October 10, 2022 | God calls each one of us to live as disciples. Carmen Rivera is the perfect example of why it’s good to take a moment and listen to what God is calling us to do.

Carmen Rivera has been a parishioner at St. Stephen Catholic Church in Riverview for over 12 years. It was just recently that she decided she wanted to do more and join a ministry, after a prompting from her oldest son.

Rivera has always tried to encourage her children to use their “time, talent, or treasure” for others within their community. She wanted to teach her children the importance of helping others around them.

“They’ve been involved with altar serving for years now,” Rivera stated. Then, one day her oldest son told her he didn’t want to serve anymore.

Rivera stated, “As the bold parent that I was trying to be, I told him that he could stop participating in the altar server ministry, if he participated in another ministry at least once a month.” Her son responded, “Well, what about you? Why aren’t you in a ministry?”

This response made Rivera take a step back and acknowledge what her son was saying. It made her wonder, “How could I be telling him to use his time, talent or treasure on something and not be that example for him too?”

“The difference it has made in my life is now I have a better understanding of the readings, a better appreciation. My youngest children are also more attentive in Mass because they see mom going up to read,” Rivera stated.

Rivera suggests that you take to prayer your thoughts about joining a ministry. You have to find what suits you and your family best. Think about the gifts that God has given you and how you can translate that into a ministry.

“Put it to prayer and be openly listening to what God has for you and your family,” said Rivera.

Father Israel Hernandez, Parochial Vicar for St. Stephen Catholic Church stated, “Anyone interested in joining a ministry at St. Stephen, simply needs to call the office. The office staff will then track down the person(s) in charge of the ministry and have them reach out to you personally.”

You should not be afraid to join a ministry, even if it may seem intimidating at first.

“We must never let fear dictate our lives. If we do, we will never move forward. God doesn’t want us to remain stuck, he wants us to move forward towards him,” Father Hernandez stated.