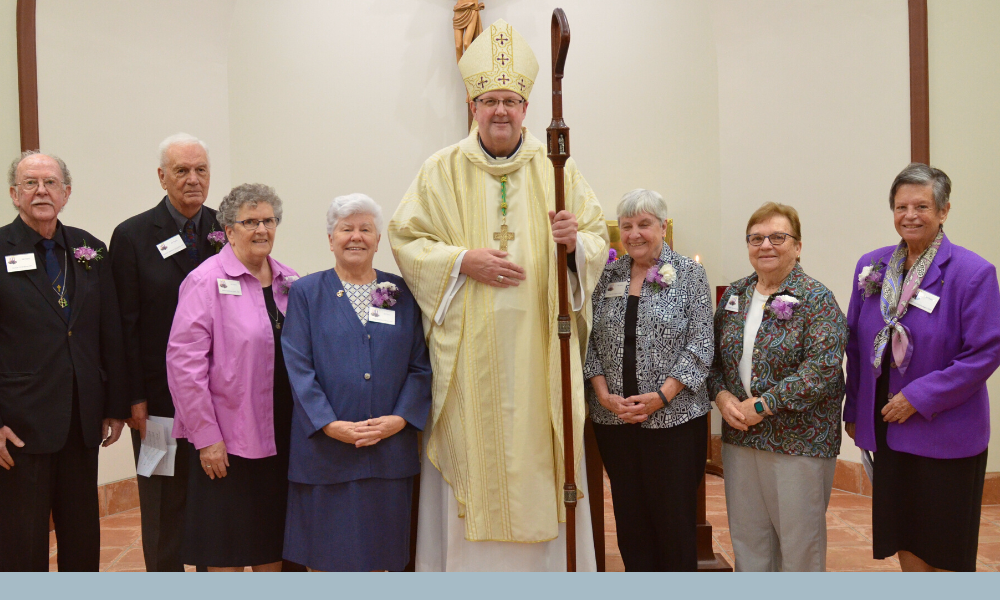 Seven religious men and women were honored by Bishop Gregory Parkes for special anniversaries during the Jubilee Mass on December 9, 2022 at the Mary Magdalene Prasch Chapel next to the Pastoral Center of the Diocese of St. Petersburg. Keishla Espinal

On December 9, 2022, seven religious men and women were honored at the Religious Jubilee Mass in the Mary Magdalene Prasch Chapel in St. Petersburg.

During the Mass the religious-order priests, brothers and sisters had the opportunity to renew their vows of poverty, chastity and obedience. During the Prayers of the Faithful, the participants prayed for all religious, including those who serve in education, healthcare, and Church leadership and those who are ill, elderly, retired or deceased.

Bishop Parkes thanked all of the jubilarians and the other religious men and women in attendance for their faithful lives of service.

“I give thanks and praise to God, for each of you, our religious, who are celebrating anniversaries this year,” said Bishop Parkes, while acknowledging that many don’t feel worthy to serve as representatives of Christ in the world.

“If God is indeed calling you, he knows what he’s getting. Despite our weaknesses, shortcomings and our fears, God uses us to fulfil his Word and to spread the Good News of Jesus Christ,” said Bishop Parkes.

The following seven religious men and women were honored at the Religious Jubilee Mass.

Brother Chris Burns, CFC, entered Edmund Rice Christian Brothers in 1962 and came to the Diocese of St. Petersburg in 1985. He still serves in his ministry. Currently serves as Director of Campus Ministry at Tampa Catholic High School.

Sister Catherine Cahill, OSF, member of the Franciscan Sister of Allegany NY entered on September 8, 1961. Came to Fl from 1984-1986, then returned in 1989 and is currently present in the Diocese of St. Petersburg till this day. She still serves in her ministry. She is the Director of Sisters’ House, a safe gathering place where women can continue to work on their spiritual life.

Sister Florence Ann Marino, IHM, member of the Sister Servants of the Immaculate Heart entered in 1959. Came to the diocese from 1975-1984 and returned 1995 till present day. She still serves in her ministry. Currently serving as the chaplain at Aventura at the Bay.

Sister Dolores O’Brien, OSF, entered in 1961 and came to the Diocese of St. Petersburg in 2000. She still serves in her ministry. She is the Pastoral Care Coordinator at Aventura at the Bay.

Sister Ann Regan, SNJM, member of the Sisters of the Holy Names of Jesus and Mary came to the Diocese of St. Petersburg in 1971. She still serves in her ministry. Serving where needed at Concordia Retirement Center.

Sister Veronica Visceglia, SSND, member of the School Sister of Notre Dame entered the congregation in 1962 and came to the Diocese of St. Petersburg in 2001. She still serves in her ministry. She currently assists members of the congregation here in Florida.