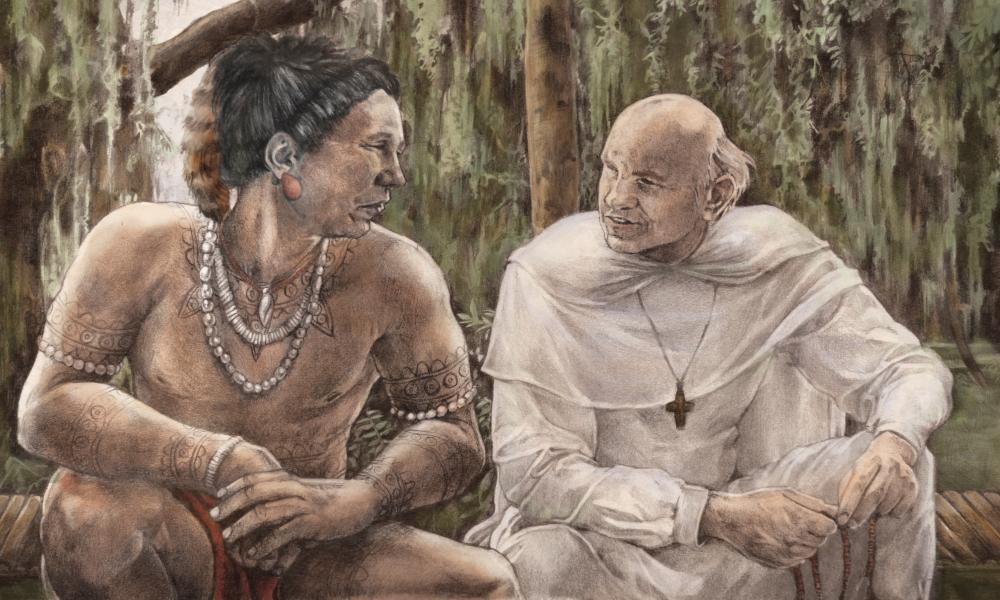 Father Luis de Cáncer, the first Dominican martyred in the United States, is portrayed speaking with a member of the Tocobago tribe in June 1549 several weeks before his martyrdom in Old Tampa Bay. Picture courtesy of the Martyrs of La Florida Mission

November 28, 2022 | The history of the Catholic faith in Florida has always included accounts of clergy and religious planting the seeds of faith on the shores and fields of the Sunshine State.

But the Church’s history is not complete without honoring the courageous examples of indigenous peoples who embraced the faith and died for it. That is one of the reasons a historical commission — that includes clergy and lay postulators from the Panhandle to Tampa Bay — has embraced the cause of canonization for the Martyrs of La Florida Mission.

“I think we have a very strong case,” said Father Len Plazewski, pastor of Christ the King Parish in Tampa. “We looked at the evidence we have and I think we’ve been able to establish the motivations (of martyrdom). The response of the individuals who targeted them and the response to stay and face death. That is the crux of the case.”

The official name of the cause is the Servants of God Antonio Inija and 56 Companions. The cause revolves around Catholics who were indigenous and missionaries from outside America who were martyred in the name of God. Father Plazewski explained such a cause is based on history rather than personal interviews because the timeline of the cause ranges from 1549 to 1712.

“We have to rely on the work of historians. The historical team has done research on Spanish documents that are in Spain, Mexico and Cuba,” said the priest who has been involved with the cause for some eight years. “We have to be able to show proper historical evidence of the circumstances of how (the 57 martyrs) died and who were their killers and the motivations for their deaths. We have to show they didn’t just die because they were being robbed or enslaved, but rather they were killed because of an issue of the faith. All that has to be documented.”

The distinction of this cause is the fact that the lead martyr and many of the companions are indigenous Catholics. While some names amongst the companions are familiar — such as Father Luis de Cáncer, the first Dominican martyred in the United States, and Jesuit Father Pedro Martínez — many companions are members of the Apalachee and Timucua tribes. The lead martyr, Antonio Inija was a native Apalachee who was martyred in the aftermath of a 1704 English and Creek attack on the Ayubale mission, which included some 8,000 Christian natives.

Colonization and subjugation to the faith were ugly stains upon the canonization cause of Junipero Serra, an 18th-century Spanish missionary who is as responsible as anyone else for establishing the Catholic presence in colonial California. But Father Plazewski said the situation in Florida was different than what went on out west, in particular that the Spanish “weren’t an occupying force,” and “they didn’t try to subjugate the people there.”

Missionaries were sent to areas in Florida without any or few soldiers.

“Spanish missionaries formed missions, but the indigenous of the area were free to live in their villages and in the missions. There was no forced labor. There wasn’t any violence (by the missionaries) to force the natives to become Christian.”

That historical recount speaks to the nature of the cause, especially during the 1704 massacre in which Antonio Inija and so many other natives were captured, killed and, in some cases tortured, by Col. James Moore, governor of Carolinas, and his Creek allies in the name of Queen Anne of England.

The atrocious massacre offers further evidence that the missionaries established missions, not slave camps among the indigenous. While the Spanish fought side-by-side with Apalachees against the aggressors, there was not a large Spanish military force present to aid in opposing the English aggression.

“When the indigenous were captured, they were given the opportunity to defame their faith and they chose a horrible death rather than capitulating to denying the faith,” Father Plazewski explained.

“Col. Moore went from mission to mission wiping out all he could and took native peoples who could not escape as slaves. … Col. Moore hated Catholics with a passion. The fact was that he did fight to advance the British Empire but he was also attacking people he hated. It was in present terms ‘human rights abuses,’ with his motivation coming from his hatred of the Catholic Church and Catholic faith. He wasn’t trying to make allies among people; he was trying to subjugate them.”

When Antonio Inija was captured, he was tortured by Moore’s forces. He and others were tied to stakes and their feet were set on fire when they refused to renounce their faith. Despite this torture, the Catholic natives encouraged each other and attempted to evangelize their tormentors.

According to historical accounts, Antonio saw an apparition of the Blessed Mother, whom he believed appeared to him to help him endure his martyrdom. The extraordinary faith and holy death of these Florida natives captured the admiration of the Spanish monarch at the time, King Philip V, who directed his ambassador in Rome to inform Pope Clement XI of this event.

Information on the massacre and the admiration of King Philip can be gleaned from European documentation. But what about historical accounts from the native tribes? Father Plazewski said that is another important, and inspirational, distinction of this cause.

The massacres on Florida soil left many tribes disseminated. Many of those who survived left the area, especially when England came to control the area. While it had been thought that many indigenous fled to Cuba, in 2000 a group of people in Louisiana revealed their own Apalachee heritage. According to their oral history, a group of Apalachee Catholics traveled west to escape persecution in Florida. They traveled to Mobile, Alabama, before settling in northern Louisiana.

When tribes were pushed farther west because of the inhumane Indian Removal Act of 1830, the Apalachee of northern Louisiana had an advantage — they spoke Spanish and had Spanish names, so they could feign being Spanish in order to stay and preserve their indigenous heritage.

Father Plazewski said indigenous historical accounts are crucial to the cause for canonization. Those of the Apalachee tribe involved in the project are “very much excited about it and in favor of it.” A video produced about the cause includes a reenactment of the fateful massacre. The man who plays Antonio is an Apalachee himself.

The progress of this cause has evolved over the years. Retired Bishop Rene H. Gracida of Corpus Christi, Texas, who was the founding bishop of the Pensacola-Tallahassee Diocese, took the first steps to open the cause in the 1980s. Then, in 2015, the cause was officially opened and celebrated during a Mass held in Leon County, not far from the site of many martyrdoms in the early 1700s.

On Feb. 21, 2022, the Congregation for the Causes of Saints received, and responded, to Pensacola-Tallahassee Bishop William Wack’s request for nihil obstat regarding the Beatification of the Servants of God Antonio Inija and 56 Companions. Now Father Plazewski said the historical documentation should be ready to submit to Rome in 2023.

So, what is needed now? Father Plazewski said if anyone has a devotion or a prayer answered that they attribute to the intercession of the Florida Martyrs, it should be included in the final report to Rome. Now is the time to offer it. Information can be sent to secretary@MartyrsOfLaFloridaMissions.org or mailed to: Martyrs of La Florida Missions, PO Box 12062, Tallahassee, FL 32317.

More information about the “Martyrs of La Florida” and the canonization cause can be found at www.martyrsoflafloridamissions.org.