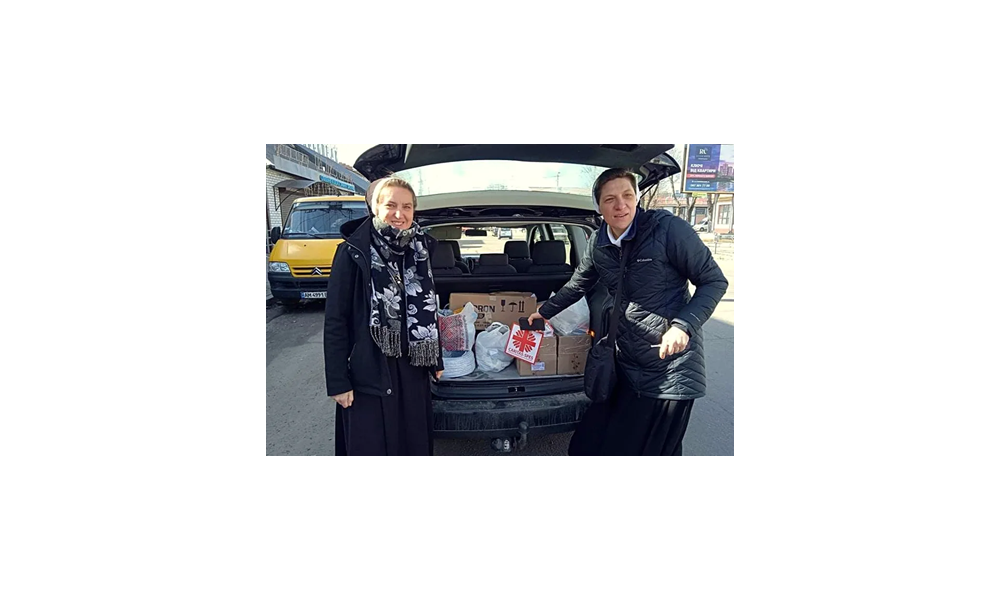 Feb 28, 2022 / (CNA) - For Sister Franciszka Tumanevych, the first day of the full-scale Russian invasion was the most difficult.

The 42-year-old member of the Sisters of the Holy Family of Nazareth told CNA that fear spread in Zhytomyr, the northern Ukrainian city where her convent is based, when Russian President Vladimir Putin ordered his forces to attack on Feb. 24.

“It was a shock, panic broke out. People were lining up for food, medicine, gasoline,” she recalled.

“But everything calmed down in the evening. Then the next day, we understood that we had to learn to live in war conditions, and we took up concrete work. For if you remain idle, it’s terrible. Now, we keep praying.”

Since Russian forces began their advance, more than 368,000 people have fled Ukraine, according to the U.N. refugee agency.

Zhytomyr came under attack on the same day, when a Russian ballistic missile fired from nearby Belarus struck the city’s airport.

Tumanevych, who was born in the city, graduated in psychology, gained a doctorate in canon law, and served in the diocesan ecclesiastical court. Before this month’s Russian offensive, she organized meetings for families and worked with the Catholic charitable organization Caritas-Spes.

She is one of three sisters at her convent. The Caritas-Spes center where the sisters used to work is now closed, so they spend their days praying and making sandwiches for the city’s civilian defenders.

Tumanevych said that there was a great spirit of solidarity in Zhytomyr, which has a population of more than 260,000 people. The sisters have received phone calls from locals offering transportation and other forms of help. When Tumanevych went to donate blood for Ukraine’s wounded, she found more than 100 people waiting in line, so she vowed to return another day.

While performing their daily tasks, the sisters seek to pray constantly.

On Feb. 16, a day of prayer and fasting for peace in Ukraine, the sisters in Zhytomyr connected with 25 families through the videoconferencing app Zoom. Afterward, they decided to hold a communal prayer every evening.

“Now more and more people are joining for the rosary. Yesterday there were already 72 families, as well as our sisters from America, Italy and Great Britain,” Tumanevych said.

“And at the end of the rosary, we say that we can now go to sleep because sisters from America are taking over the duty,” she added.

The sisters pray the rosary especially for the conversion of President Putin, who was born on Oct. 7, 1952, the feast of Our Lady of the Rosary.

Tumanevych said that her mother, with whom she is constantly in touch, prayed as many as seven rosaries a day.

The Congregation of the Sisters of the Holy Family of Nazareth was founded in Rome in 1875 by Franciszka Siedliska, a Polish blessed also known as Maria of Jesus the Good Shepherd.

The congregation, which is dedicated to education and ministry to families, has six houses in Ukraine. But one was forced to close shortly after the invasion began. The two sisters in Kherson, a city in southern Ukraine, had to flee their convent and are making their way to Poland, where more than 150,000 people from Ukraine have sought refugee since Feb. 24.

In the besieged capital city of Kyiv, the congregation has a community of seven sisters. They have taken refuge in a church basement, where they are caring for around 100 people forced to evacuate their apartments.

“The sisters are with the people all the time,” Tumanevych said. “They pray all day long, and one of the nuns from the convent in Kyiv has lost her voice because they constantly pray.”

Although shops are closed, the sisters have been able to buy blankets and disposable plates. They also provide food, but fear it could run out.

The sisters continue to dream of life after the war. They hope to open a dormitory for female students that would help young women to discern whether they have vocations to marriage or religious life.

Tumanevych said: “I’m staying. This is my country, and I will defend it. With the rosary and sandwiches, and everything that can be done in these conditions.”