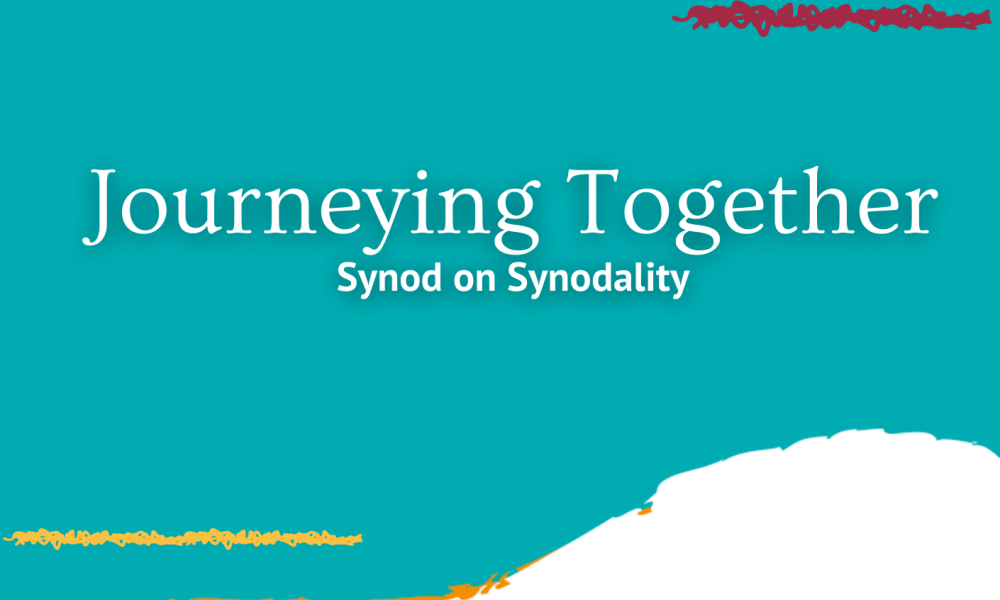 Homily From the Synod Opening Mass

Dear Brothers and Sisters in the Lord.  Today, in addition to gathering for this Sunday celebration of the Eucharist, we also open the Diocesan Phase of the Synod on Synodality called for by Pope Francis in May of this year.  And we do so in a most appropriate way – by coming together to pray – and specifically, to ask for an outpouring of the Holy Spirit to guide us through this process.

For some of you, this may be the first time that you’re hearing about this synod process.  And no doubt, you have many questions.  First and foremost might be, “What is a Synod”?  The word Synod usually refers to an event, a gathering of the Pope with  cardinals, bishops, and other invited experts, who come together for a period of time to discuss topics or themes, chosen by the Pope, and through prayer and open discussion, to discern how the Holy Spirit may be calling the Church to move forward.  Recent synods have been on the themes, for example, of the family and the vocation of young people.

Synodality refers to a style, or way of doing things, that characterizes the life of the entire Church, a way of mutual listening, dialogue, and collective discernment. This style is certainly used during synods, but should also be part of the life of the Church at all times and at every level.  Here in the diocese of St. Petersburg we see this style utilized in such bodies as Parish Pastoral Councils, the Presbyteral Council, and various other councils and committees which are convoked for particular purposes.

The current Synod on the topic of Synodality will consist of several phases.  The first phase is the diocesan phase which is what we begin today.  This phase will take place between October and April of next year.  There will be much more information forthcoming about what will happen during this phase and how you will be invited to participate.  The second phase will involve a series of continental meetings.  For us, this will include the United States and Canada.  Finally, bishops and others will gather with the Holy Father in the Assembly of the Synod of Bishops in Rome in October of 2023 to discern how the Holy Spirit has been speaking to the Church during this process, and to communicate this to the universal Church.

Last Sunday, Pope Francis celebrated the Opening Mass of the Synod at St. Peter’s Basilica in Rome.  In his homily, he reflected on three words which must characterize the synod process – encounter, listen, and discern.

The Gospels are filled with accounts of how Jesus encountered people in the course of His public ministry.  These encounters resulted in healing, forgiveness, and conversion.  They were life changing experiences for many who encountered the Lord with a spirit of openness and faith.  Pope Francis stated in his homily, “Every encounter – as we know – calls for openness, courage, and a willingness to let ourselves be challenged by the presence and the stories of others.”  The synod process which we begin today will require that we have a willingness to encounter and engage others wherever they may be in their life and spiritual journey – understanding that everyone is at a different place.

The second word he reflected upon was listen.  He stated that “true encounter arises only from listening.”  In his homily, Pope Francis challenged us with some questions.  He asked, “Are we good at listening?  How good is the ‘hearing’ of our heart?  Do we allow people to express themselves, to walk in faith even though they have had difficulties in life, and to be part of the life of the community without being hindered, rejected, or judged?”

Speaking for myself, while I try to be a good listener, it’s not easy.  After being installed as bishop of our diocese in January 2017, one of the first things I did was to convoke listening sessions throughout our five counties.  At those sessions, I would listen for an hour and a half as parishioners publicly responded to questions regarding our diocese.  And while I truly enjoyed the opportunity to meet so many people, and to learn so much about our diocese, I found myself wanting to respond to each person instead of just listening to them.  During this synod process, the ability to simply listen to others will be critical.

And finally, Pope Francis reflected upon the word discern.  He said, “The Synod is a process of spiritual discernment, of ecclesial discernment, that unfolds in adoration, in prayer, and dialogue with the word of God.”  He went on to say that it is the living Word of God that “guides the Synod, preventing it from becoming a Church convention, a study group or a political gathering, a parliament, but rather a grace-filled event, a process of healing guided by the Spirit.”  After encountering and listening, we are called to discern how the Holy Spirit is speaking to us and to the Church at this moment in history.  Pope Francis has reminded us that this process is not about each of us bringing a personal wish list of things we would like to change in the Church.  It’s not about changing established Church teaching and doctrine.  It shouldn’t be merely a process of distributing surveys and voting on issues.  Rather, it is a process of journeying together in prayer and listening to the Holy Spirit and one another.

One of my favorite sayings is, “Leave some room for the Holy Spirit.”  In other words, to be open to the possibility that what we initially think and embrace could change when guided by the Holy Spirit.

Our gospel reading this morning from Matthew concludes with the verse, “for where two or three are gathered together in my name, there am I in the midst of them.”  My dear brothers and sisters, we gather here today in the Lord’s name, and we ask for his blessing as we embark on the diocesan phase of the synod process.  May these coming months be an opportunity to for us to journey together, to encounter one another, to listen to each other and to the Holy Spirit, and ultimately, to discern how God is speaking to us in this local Church in St. Petersburg.  And may we do this, as all things, for the glory of God.