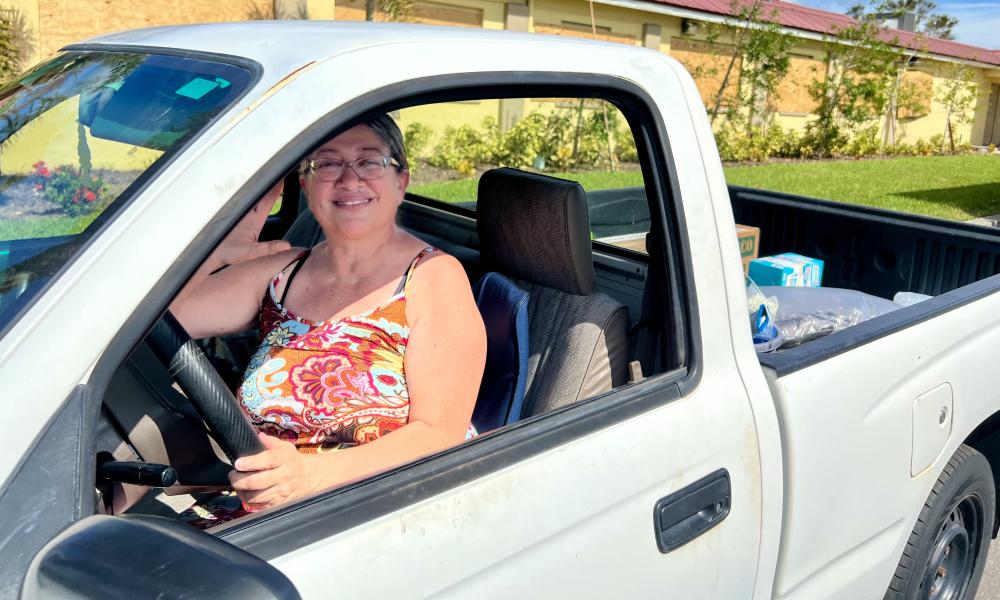 A caravan of volunteers and supplies left Tampa for Fort Myers on October 11, 2022, and the assistance will continue for the foreseeable future, thanks to Catholic Charities and generous donors.

Caption: Lizvelle Rivera, is pictured in her car after receiving supplies and food assistance from Catholic Charities Diocese of Venice.

October 13, 2022 | Lizvelle Rivera recalls vividly what she heard as category 4, Hurricane Ian passed over her home in Fort Myers.

“It was really scary,” she said. “I heard crazy sounds. You hear every single shingle come off; every single tree come down. Sounds like a bunch of people running on your roof. But no, it's because everything is being blown off.”

The storm passed right over Rivera’s home, located a few miles inland from the Gulf of Mexico, near the Caloosahatchee River. Once the storm passed, Rivera emerged from her shelter-in-place location and saw the impact caused by the powerful storm.

“Our neighborhood is completely destroyed,” she said. “I lost my roof.”

Rivera said she also lost her job, which was located on Fort Myers Beach, where many structures were destroyed, and almost all are unsafe to enter.

She is one of the thousands of people being helped by Catholic Charites of the Diocese of Venice, that has set up several drive-thru emergency supply distribution sites throughout the affected areas.

Michael Vega, a program manager for Catholic Charities Diocese of Venice, said the need is so great that there is a line of cars waiting to come through the distribution site before they open for the day.

“We took a really bad hit, there’s a lot of homes that were lost, some lives were lost, and quite a few people lost their livelihoods,” he said. “This is nonstop. The moment the supplies get here they go right out the door, there is someone waiting for it.”

Vega said they started meeting the needs of those affected immediately, causing their stocked food panty to become bare.

Catholic Charites Diocese of Venice made an urgent request for supplies and assistance to several organizations including Catholic Charities of the Diocese of St. Petersburg. They began an emergency drive and within a week had enough items to fill a box truck, pickup truck and a van.

“We had no idea how great the response of the supply drive would be and, supplies are still coming in. We are so grateful for such an abundance amount of generosity from those in our community,” said Maggie Rogers, Executive Director of Catholic Charities.

The supplies were transported October 11th, to Vega and his team for immediate distribution.

“This area is still without electric and Catholic Charities Diocese of St. Petersburg staff with continue to rotate weekly down south as long as it’s necessary. Each week a team deploys, they will transport another truck full of supplies,” said Rogers.

Also grateful is Rivera, who was still without power and clean running water in her home.

“I came here and now I have supplies for cleaning. I received tarps, I received ice, I received a hot meal and a cold meal. I really appreciate that,” she said. “Thank you, Catholic Charities.” 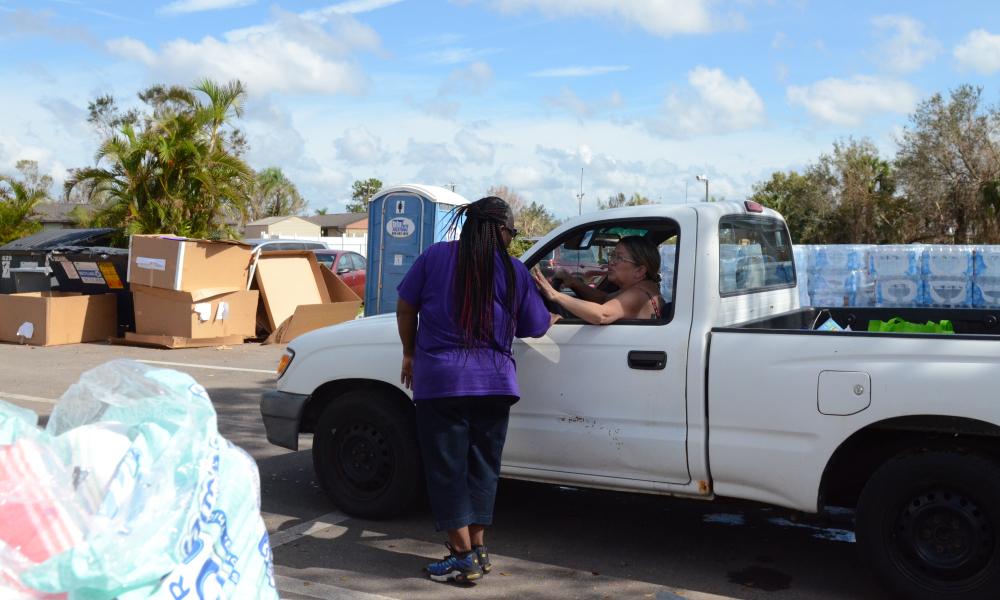 Lizvelle Rivera, is photographed in her car, thanking Catholic Charities volunteer for the supplies she received. 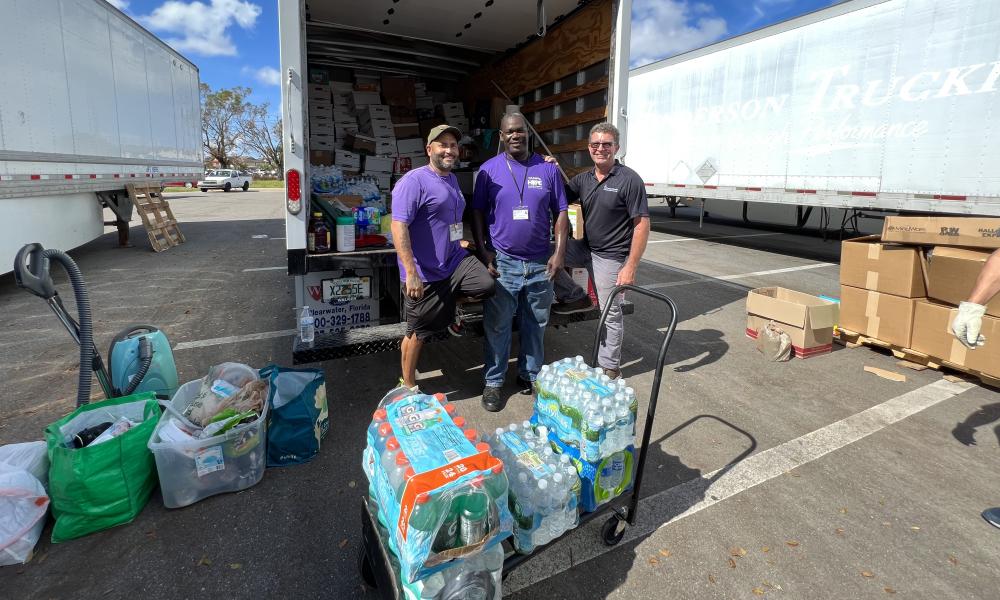 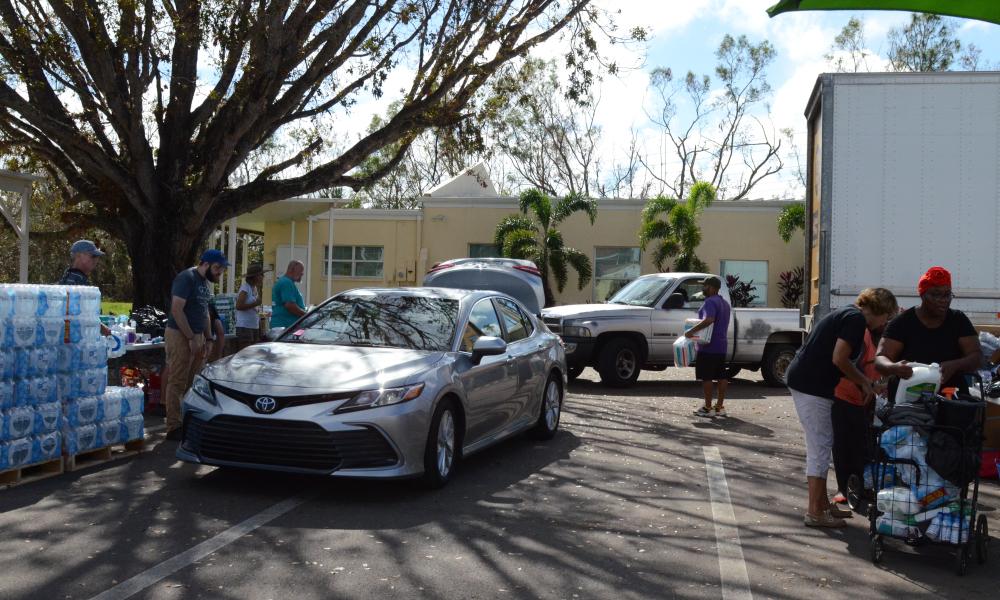 For a list of items needed and where to drop them off at locations within Tampa Bay visit:

Catholic Charities of the Diocese of Venice is welcoming those who wish to volunteer with disaster relief efforts in and near the areas that were hardest hit by Hurricane Ian. For more details, please go to https://catholiccharitiesdov.org and click on the “Volunteer Now” option.