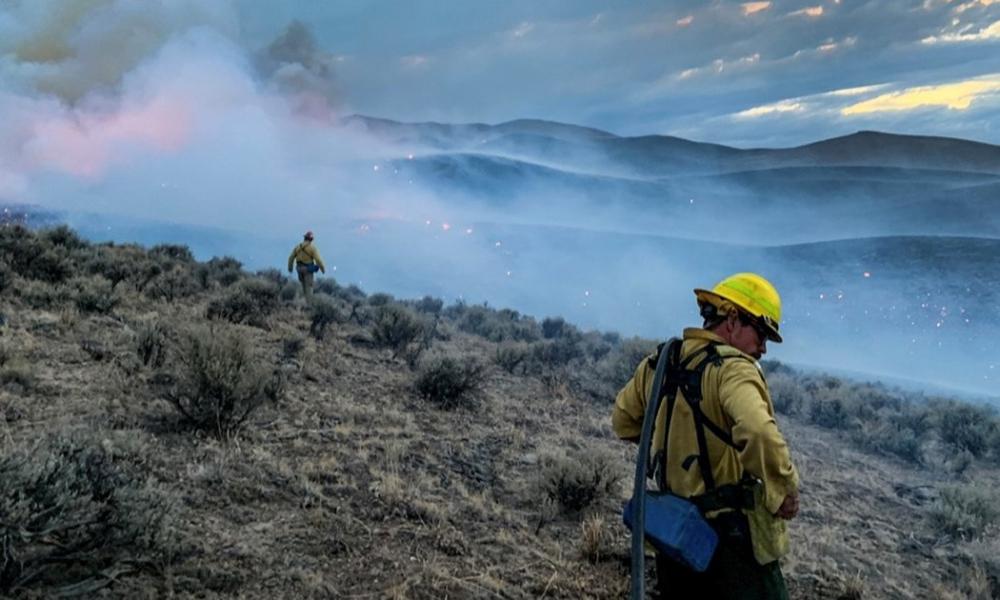 Firefighter's Trust in God is Forged by Fire and Faith

Caption: Joe Ybarra, right, of Indianapolis, prepares to help fight the Osgood Fire in Nevada that was started by lightning in July of 2020, and fueled by heavy winds from passing thunderstorms. (CNS photo/courtesy Joe Ybarra via The Criterion)

September 2, 2022 | (CNS) - Joe Ybarra reached for his rosary as the wildfire raged across the Idaho mountainside, threatening his life and the lives of seven other U.S. Forest Service firefighters.

As the flames rushed toward the team, Ybarra held his rosary beads and prayed that he would be safe so he could return to his family and friends in Indiana.

At first, the threat had been minimal when the fire on Scarface Mountain began Aug. 7, 2021. Arriving on the scene by helicopter, the firefighters noticed that the blaze appeared to be dying following a dousing of water from an airborne fire crew.

Awakening early the next day to build a line to contain the fire, Ybarra recalled how the wind kicked up quickly, causing the flames to roar again. The combination of fire and smoke was so dense that the firefighters had difficulty seeing, forcing them to rush back to their base camp.

The fire grew rapidly and Ybarra's team had to abandon the camp to go to a safe location.

"While retreating, we observed that the fire had made its way to where our base camp was," Ybarra said.

The group's commander searched for a safe spot for the firefighters while instructing them to get their fire shelters ready. A shelter can help someone survive for more than an hour in nonburning areas surrounded by intense flames.

"The prospect of possibly having to use them had me worried because they are typically used as a last resort," Ybarra said.

"I remember asking myself what I was doing out there, 26 hours away from family and everything I know. As my mind began racing, I grabbed my radio, a water bottle, my fire shelter and my rosary as we got to our safe spot and waited to see what the fire was going to do next. When I found my rosary, it was then when my racing mind stopped."

Seconds later, helicopters arrived overhead, dropping water on the blaze. One swooped down to shuttle the team to safety. A single thought filled Ybarra's mind: "I felt God had answered my prayers."

The Scarface Mountain fire raged for nearly four weeks, scorching 88,000 acres. Coming face to face with a wildfire still didn't dampen Ybarra's enthusiasm to be a firefighter. It also continued to inflame the 32-year-old's trust in God.

In the year since, Ybarra became a firefighter in a fire department near Indianapolis. He also became a member of St. Mark the Evangelist Parish in Indianapolis.

His journey to both of those points in his life has been marked by a series of twists and turns, forged by fire and faith.

Ybarra's faith journey leads back to his mother, who faced her own life-threatening situation when civil war raged in her homeland of Nicaragua during the 1970s and 1980s. After immigrating to the United States, she married and gave birth to Ybarra, instilling her Catholic faith -- and her belief in the power of the rosary -- in him.

"She prayed the rosary, through the good, through the bad," said Ybarra, the older of her two sons. "She always remained faithful. It was a constant in her life, something that guided her decision-making and heavily influenced her values."

Like many young adults, Ybarra lost connection with God during his first few years as a student at Indiana State University. Then came a faith-changing invitation from a fraternity brother to attend Mass at St. Benedict Church in Terre Haute. The sound of the choir filled Ybarra with joy, so he approached the choir director about joining it.

"He said, 'Yes, of course,'" Ybarra recalled. "From there they were very welcoming to me. At that point, it was something that I wasn't doing with my family. It was something I was doing of my own accord."

Ever since, he has been seeking to connect with God.

"My relationship with him is pretty strong right now," Ybarra said. "Initially, I would go to God only when there was bad stuff that was going on. Now it's more that I'm talking with him daily, whether it's through music, through the rosary, even through just taking a walk. Through the good, through the bad, that conversation with him is almost like a constant daily thing now."

Ybarra relied on those conversations when he made a dramatic change in his life.

A saxophone player, Ybarra majored in music education at Indiana State, where he also earned a master's degree in higher education administration, leading to a stressful desk job at Purdue University. Yet as a young adult nearing 30, Ybarra didn't feel fulfilled, "doing all these reports, reporting to eight bosses."

He began volunteering as a firefighter in a nearby township, and he realized he loved the work. He took a job with Nevada's Bureau of Land Management from May to December 2020. In the summer of 2021, he joined the U.S. Forest Service. It was an experience that included the reality of seeing a raging fire -- and his life -- flash before him on Scarface Mountain.

In nature's beauty and its fury, Ybarra always found God's presence was constant. "You just felt immersed in his creation and having him around you at all time -- even when the wind is blowing through the trees," he said.

"On the opposite side, during the fires, you definitely felt God was there, too."

Ybarra also carried another constant with him -- his rosary. It has been with him every day since he started as a firefighter in Indiana. Most of his emergency runs have been medical in nature. He finds it rewarding to calm people in serious pain as well as family members and to be thanked for his work.

He has the same gratitude for the presence of God in his life when he starts each day with prayer.

"It's a mindset, just calming everything down. It's just me and God during that time. It's like, 'Hey, God, it's me again.'

"My relationship with him has definitely had a huge impact. Like for my mom, I can see how it influences my decision-making, how it influences my trajectory in life. Through my faith, I've been able to have a lot of positive experiences and meet a lot of amazing people. It's been a blessing in my life."