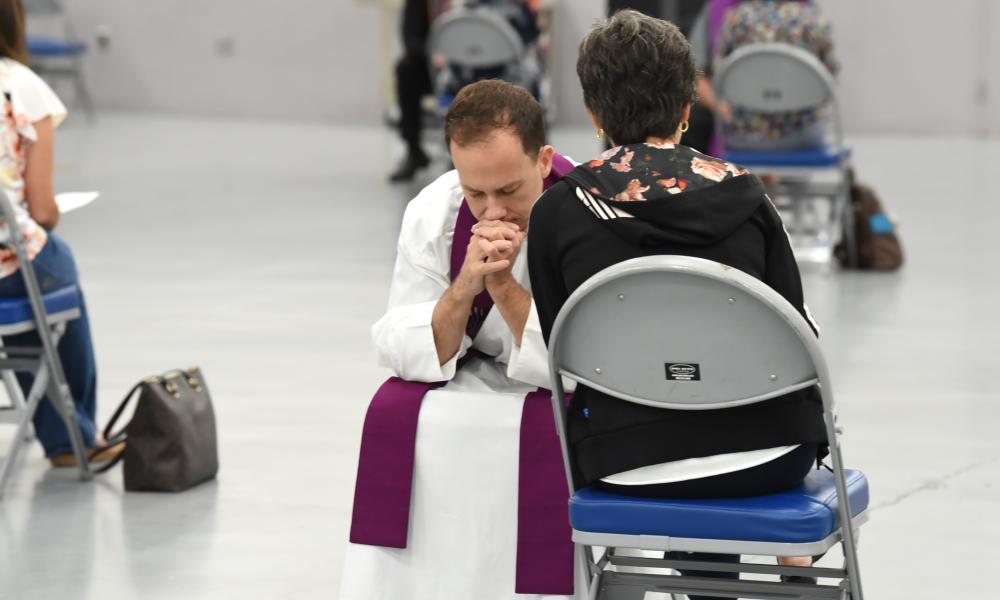 Find Freedom in Forgiveness This Advent

December 7, 2022 | "I am forgiven! I am forgiven! I am forgiven!” The young man had just stepped out of the reconciliation room and was jubilant. He had gone through a long struggle with serious sin and the priest had asked him to keep coming back to the sacrament each week until he was free. It took time, but he grew in trust of God and experienced a new freedom he never thought possible.

Before this, his relationship with God had been weak to non-existent. He was raised in a Catholic home, and even went to Catholic school, but he never really practiced his faith from his heart. He just went through the motions. In some ways, he was successful – from a worldly point of view. He was making good money as a young professional, and had a bright career future. However, his high school and college habits had stayed with him and had gotten worse. He had gotten involved in drinking, drug use and inappropriate sexual activity for years – now many of those activities were addictions. His thoughts were ever focused on when it would be time for the next fix. At times, when he would allow himself to consider his choices, he was deeply disappointed in himself. He felt alone and too embarrassed (or proud) to admit he had a problem he could not handle. His emptiness grew, as did his despair. He was in a prison of his own making and at this point it seemed as if he were serving a life sentence.

Then, one Saturday, he found his way into the church. He had drunk himself sick the night before and felt miserable. He came to church because he did not know what else to do. He remembered having a sense of peace and well-being in church when he was young. He knew there was something very good and right about it. And so there he was. The church was quiet and dark. A few candles burned near a statue of Mary. As he sat, he began to cry. He felt he did not really belong there nor deserve to be in such a good place. An old priest came into church and went into the reconciliation room. The light above the door came on – the priest was ready to hear confessions.

The young man sat in the pew and became anxious. He felt he ought to go in and talk to the priest, but he was afraid.

He considered his life and all the choices he had made. He had been bold enough to do many wrong things, why not be bold now and try to do something right? He was in church after all. Nothing in that reconciliation room could hurt any more than the pain he was already in.

The young man looked up at the crucifix, and saw what Jesus had gone through. He also saw himself. His sin had wounded and scarred his own soul. He knew he deserved his pain, but Jesus was innocent. The young man prayed, “I am sorry Jesus. I know my sins put you on the cross. Please forgive me, Lord. Help me, Lord.”

He went in to see the priest. He went in with despair and a great weight on his back. He went in like a dead man.

He came out as if he were Lazarus raised from the dead.

The old priest was kind to him and did not say much. He just told him to keep coming to church and to keep coming back to this sacrament each week if he could.

Each week he returned faithfully, even though he sometimes fell. He kept coming back. As the months went by, he began to experience more and more freedom. His sins no longer held him bound. He found he was thinking differently – about himself, the world, his family and friends. Hope was blazing in him and he was experiencing the promise of Jesus being realized. “If the Son sets you free, then you are free indeed.” (John 8:36) This young man knew he was forgiven. His faith was in Jesus and the forgiveness that Jesus gave him He felt loved and realized it was God loving him. If the young man could have done flips of joy in church, he would have.

This young man gave me permission to share his story. We all have a story. We have different difficulties, different struggles and different sins. But each one of us is meant for freedom.

Scripture is filled with songs of praise like  Canticle of Zachariah: “Blessed be the Lord, the God of Israel. He has come to his people and set them free. “(Luke 1:68-69)

When the people of Israel were freed from slavery in Egypt, they sang a “new song” to the Lord. They exalted God’s saving power. (cf Exod 15) King David and other psalmists wrote beautiful hymns of praise and thanksgiving to God for deliverance and freedom. One of my favorities is Psalm 32, “You took away the guilt of my sin ... you are my shelter; from distress you will preserve me; with glad cries of freedom you will surround me.”

Instead of being surrounded by reminders of our sin and guilt, God surrounds us with “glad cries of freedom.”

My brothers and sisters, if you have been forgiven by God, you are free! Remember that.