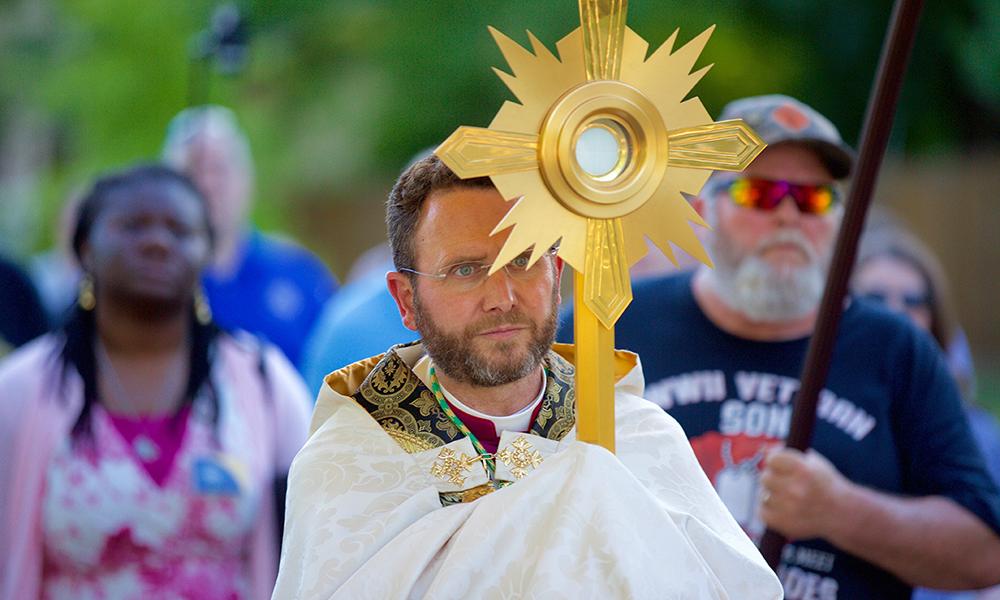 The U.S. bishops approved plans for the revival during their fall general assembly Nov. 15-18 in Baltimore. The revival is set to begin next June and will culminate in a National Eucharistic Congress hosted by the Archdiocese of Indianapolis July 17-21, 2024.

Bishop Cozzens, who is leading the revival effort, is chairman of the U.S. Conference of Catholic Bishops' Committee on Evangelization and Catechesis. Currently auxiliary bishop of St. Paul and Minneapolis, he was named by Pope Francis Oct. 18 to head the Diocese of Crookston, Minnesota, where he will be installed Dec. 6.

Asked how the Catholic Church can deepen the understanding of the Eucharist with the revival and congress, Bishop Cozzens referred to Jesus saying a lighted lamp does not belong under a bushel basket.

"Set it up on a hill so that people can see it and be attracted to it," the bishop said. "And I think that’s what we want to do with our teaching on the Eucharist."

Bishop Cozzens described the Eucharistic Revival and Congress Nov. 17 during the bishops' assembly and also in a Nov. 18 interview from Baltimore with The Catholic Spirit, newspaper of the St. Paul and Minneapolis Archdiocese.

Archbishop Bernard A. Hebda of St. Paul and Minneapolis joined Bishop Cozzens for the interview.

Bishop Cozzens said he could sense the bishops' unity and excitement over the revival "throughout the week and in the conversations ... and the gratitude and the excitement of the bishops who feel like there's a pastoral need that we're fulfilling."

During the assembly, the bishops also approved a 26-page statement titled "The Mystery of the Eucharist in the Life of the Church," which explains the centrality of the Eucharist and addresses the fundamental doctrine about the sacrament.

Archbishop Hebda said it represents the common understanding of the bishops as they restate long-held church teaching.

The document provides a blueprint that will help throughout the Eucharistic Revival, and specifically for programs such as the Rite of Christian Initiation of Adults and small groups in parishes, the archbishop told The Catholic Spirit.

"I think it's going to be really helpful for people who want to go deeper in their faith and to be reminded of why the Eucharist and the eucharistic sacrifice is the source and summit of all Christian life," he said. "I just love the way that it reflects that excitement that the bishops have about being able once again to promote, in some new ways, our love for the Eucharist."

Archbishop Hebda said that as the faithful participate in the revival and the eucharistic congress, the Holy Spirit will draw people who need to have that experience.

He hopes it brings unity "with that effort throughout the world" in a way "in which we're able to really energize the faithful ... and points to further deepening of our love for the Eucharist and our love for the church."

The first year of the three-year revival will have a diocesan focus that could include eucharistic processions, adoration and prayer, Bishop Cozzens said. The second year will focus on parishes, with catechetical resources being prepared that will help train leaders in parishes to share the meaning and depth of the Eucharist, he said.

"Those leaders will help us really reach out to the people who are ... minimally connected to the church," Bishop Cozzens said.

They may call themselves Catholic, and they may sometimes attend Mass, he said, but they don't yet understand the gift of the Eucharist. Talking with people who are not Catholic or not even Christian could be part of the outreach as well, he said.

Parishes might set up small group opportunities, parish eucharistic days and days of eucharistic service, with parishioners bringing the Eucharist to the homebound and inviting young people to that kind of service, Bishop Cozzens said.

For the National Eucharistic Congress, he envisioned a pilgrimage of sorts to Indianapolis that could involve processing a monstrance to various regions and provinces in the U.S., with Catholics gathered at events with their bishops.

He gave the example of a potential prayer event for racial healing in the Twin Cities, an event in a Southern state focused on migrants, or an event at a prison where people could pray for healing and forgiveness.

"I do think these big events, the Holy Spirit works through them, and I think it will have a big impact on our country," Bishop Cozzens said. He said several bishops at the USCCB told him, "We're coming."

"I think it's going to be an exciting thing," Bishop Cozzens said. He expects 80,000 to 100,000 people to attend, although some people suggested it could draw twice that, he said.

"You wonder if there could be a future pope and future saints there as well," said Archbishop Hebda, "that it would be something that would nurture that love for the church and the love for her Eucharist. It really is exciting."

Bishop Cozzens sees a World Youth Day-style event with an opening Mass in a stadium and events throughout the week -- something for high school students, young adults, people from various cultures -- in a festive atmosphere "that happens with people using the arts and talents to honor the Eucharist," he said, with catechetical talks, keynote addresses, time of prayer and adoration, and a large closing Mass.

Plans are tentative and open to the promptings of the Holy Spirit, said Archbishop Hebda.

Bishops he spoke with about the National Eucharistic Congress mentioned how the revival is being driven by the Holy Spirit, "and we shouldn't be surprised if there were some surprises in the way in which the Holy Spirit leads us," he said.

The archbishop said he has thought a bit about the symbolism of the Mississippi River's headwaters in Minnesota -- how something that starts small becomes something so mighty.

"This could be a real moment for us to come together and build something that's going to be mighty in our response to Christ’s call," he said.

Umberger is on the staff of The Catholic Spirit, newspaper of the Archdiocese of St. Paul and Minneapolis.

Photo Caption: Auxiliary Bishop Andrew H. Cozzens of St. Paul and Minneapolis carries the Eucharist in a monstrance during a procession June 19, 2021. Bishop Cozzens was recently named to head the Diocese of Crookston, Minn., and will be installed Dec. 6.