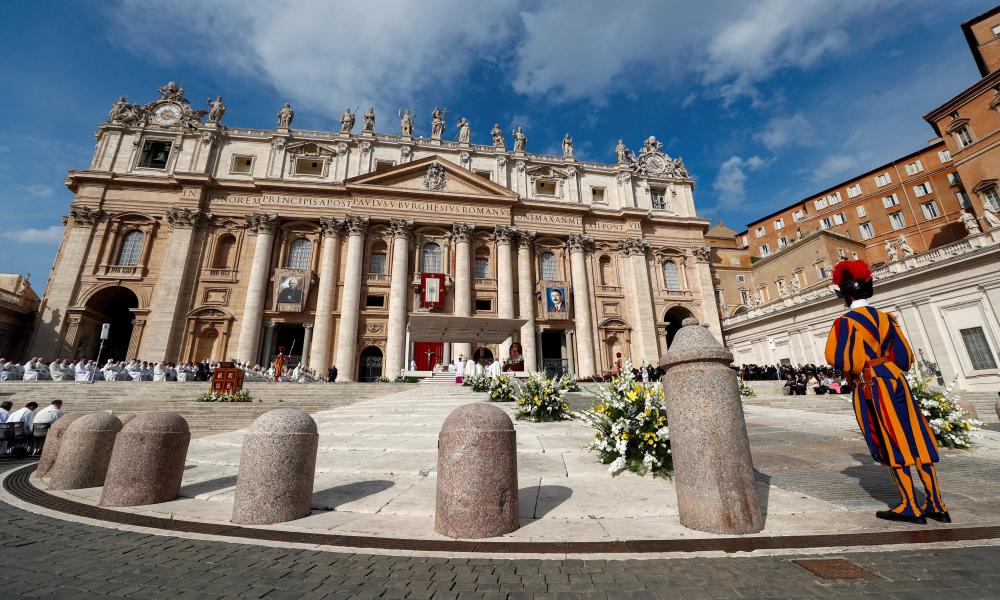 Enrolled Among the Saints

The two saints were both born in Italy in the 19th century and ministered to others amid the massive emigration of hundreds of thousands of Italians at the turn of the 20th century.

Scalabrini is known for founding a missionary order that ministered to immigrants, while Zatti was himself an immigrant, leaving Italy for Argentina with his family in 1897 at the age of 16.

In an outdoor Mass in St. Peter’s Square on Oct. 9, the crowd chanted the Litany of the Saints as the pope prepared to solemnly declare the two saints.

With his pastoral staff in hand, Pope Francis proclaimed in Latin: “For the honor of the Blessed Trinity, the exaltation of the Catholic faith and the increase of Christian life, by the authority of our Lord Jesus Christ, and the Holy Apostles Peter and Paul, and our own, after due deliberation and frequent prayer for divine assistance, and having sought the counsel of many of our brother bishops, we declare and define Blessed Giovanni Battista Scalabrini and Artemide Zatti to be Saints and we enroll them among the Saints, decreeing that they are to be venerated as such by the whole Church.”

After the Gospel was chanted in both Latin and Greek, Pope Francis said in his homily that the two new saints can intercede to “help us to walk together, without walls of division; and to cultivate that nobility of soul, so pleasing to God, which is gratitude.”

The pope said that the canonization made him think of the many suffering migrants today, mentioning refugees from Ukraine and immigrants who attempt to cross the Mediterranean to reach Europe.

Pope Francis dispensed with the Church’s usual requirement for a second miracle to canonize Scalabrini.

The pope said in his homily that the Italian bishop had “great vision” and “looked forward to a world and a Church without barriers, where no one was a foreigner.”

“Bishop Scalabrini, who founded a congregation for the care of emigrants … used to say that in the shared journeying of emigrants we should see not only problems but also a providential plan,” he said. Scalabrini was once described by Pope Pius IX as “the apostle of the Catechism.”

A native of the Italian region of Lombardy, Scalabrini was ordained a priest in 1863 and made bishop of Piacenza at the age of 36. As bishop, he founded the Missionaries of St. Charles Borromeo (also known as the Scalabrinians). He also created the lay “Saint Raphael Association,” which, like the order he founded, was dedicated to offering pastoral care to immigrants at the ports where they embarked and disembarked at the turn of the 20th century.

In 1901, he visited his missionaries in the United States and was received at the White House by President Theodore Roosevelt.

Scalabrini was convinced of the need for institutions to accompany the journey of migrants in all its stages, taking care not to abruptly sever cultural ties with the homeland and maintaining the mother tongue as a bond of unity with the other compatriots.

After returning from visiting his missionaries in Brazil, Scalabrini died in 1905 on June 1 — a date that the Church now marks as his feast day.

The saint is also remembered for founding a diocesan newspaper, for caring for the poor and elderly, for being a promoter of eucharistic adoration, and a protector of correct liturgical chant.

Scalabrini wrote: “Precisely because of the migrations imposed by persecutions, the Church pressed beyond the confines of Jerusalem and of Israel and became ‘catholic’; thanks to the migrations of our own days, the Church will be an instrument of peace and of communion among peoples.”

Pope Francis praised Zatti as “a living example of gratitude.” He highlighted in his homily how the immigrant nurse thanked God by “taking upon himself the wounds of others.”

“Cured of tuberculosis, he devoted his entire life to serving others, caring for the infirm with tender love. He was said to have carried on his shoulders the dead body of one of his patients,” the pope said.

Zatti was born into extreme poverty in Italy in 1880. At the age of 9, he was already helping his parents by working as a farmhand before his family emigrated to Argentina.

As a young man, Zatti attended a Catholic parish run by the Salesians of Don Bosco in the Argentine town of Bahía Blanca. At 20 years old, he joined the candidacy to become a Salesian priest.

While living in the Salesian community, Zatti contracted tuberculosis after caring for a young priest with the disease.

One of the Salesian priests, a nurse, suggested that Zatti pray for the intercession of Mary Help of Christians, making a promise that if he was healed, he would devote his life to helping the sick.

Zatti willingly made the promise and was healed of the tuberculosis. He later said about the event: “I believed, I promised, I was healed.”

The young Italian immigrant gave up the idea of the priesthood and became a Salesian Coadjutor Brother, a lay role so that he could devote himself to service in the medical field.

In 1915, at the age of 35, Zatti became the director of the Salesian-run hospital in Viedma, a city in central Argentina. Two years later he also became the manager of the pharmacy and received his license as a professional nurse.

He not only worked in the hospital but also traveled to the peripheries of Viedma and the neighboring city of Carmen de Patagones to treat people in need, and his reputation as a saintly nurse spread throughout that area of Argentina.

Zatti always saw Jesus in each of his patients. Some people even recalled seeing him carry the body of a patient who had died during the night to the mortuary as he recited the De Profundis, a prayer for the dead which comes from the text of Psalm 130.

People who knew him said that Zatti carried out his service to the sick with heroic sacrifice and that he radiated the light of God, even bringing some unbelievers to faith.

He is the first Salesian coadjutor to be declared a saint. His feast day will be celebrated on Nov. 13.

At the end of the canonization Mass, Pope Francis prayed the Angelus inLatin with the crowd.

The pope noted that Maria Costanza Panas, a Poor Clare nun who offered her sufferings for the Second Vatican Council, will be beatified in Fabriano, Italy, on the same day as the canonization.

The Catholic Church will mark the 60th anniversary of the opening of the Second Vatican Council on Oct. 11.

“Regarding the beginning of the Council 60 years ago, we should not forget the danger of nuclear war that menaced the world right at that time. Why don’t we learn from history? Even at that moment, there were conflicts and huge tensions, but the way of peace was chosen,” Pope Francis said.

He added: “It is written in the Bible: ‘Thus says the Lord: Stand by the roads, and look, and ask for the ancient paths, where the good way is; and walk in it and find rest for your souls’” (Jer 6:16).

“And now let us turn to the Virgin Mary that she might help us be witnesses of the Gospel, enlivened by the example of the saints,” Pope Francis said.

A portrait of St. Giovanni Battista Scalabrini is displayed as Pope Francis celebrates Mass for the canonizations of St. Scalabrini and Sts. Artemide Zatti at the Vatican Oct. 9, 2022. (CNS photo/Vatican Media) 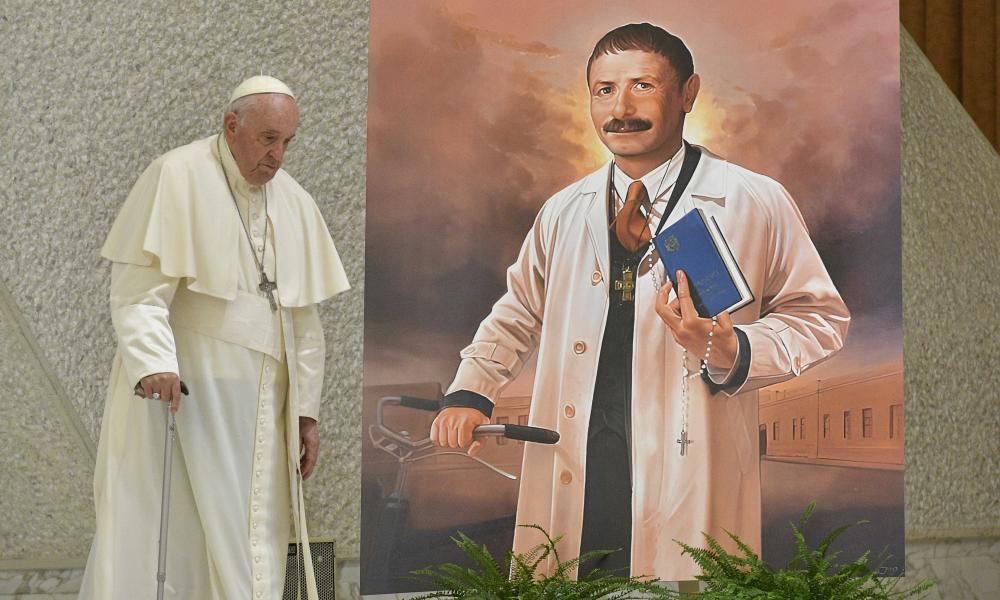 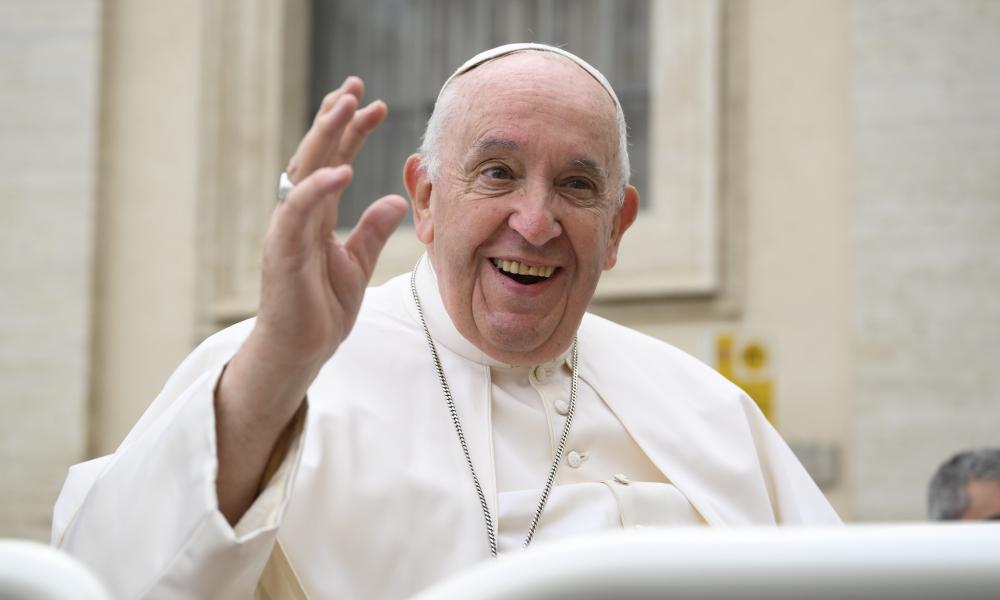 Pope Francis waves as he arrives to celebrate the canonization Mass of Sts. Artemide Zatti and Giovanni Battista Scalabrini at the Vatican Oct. 9, 2022. (CNS photo/Vatican Media) 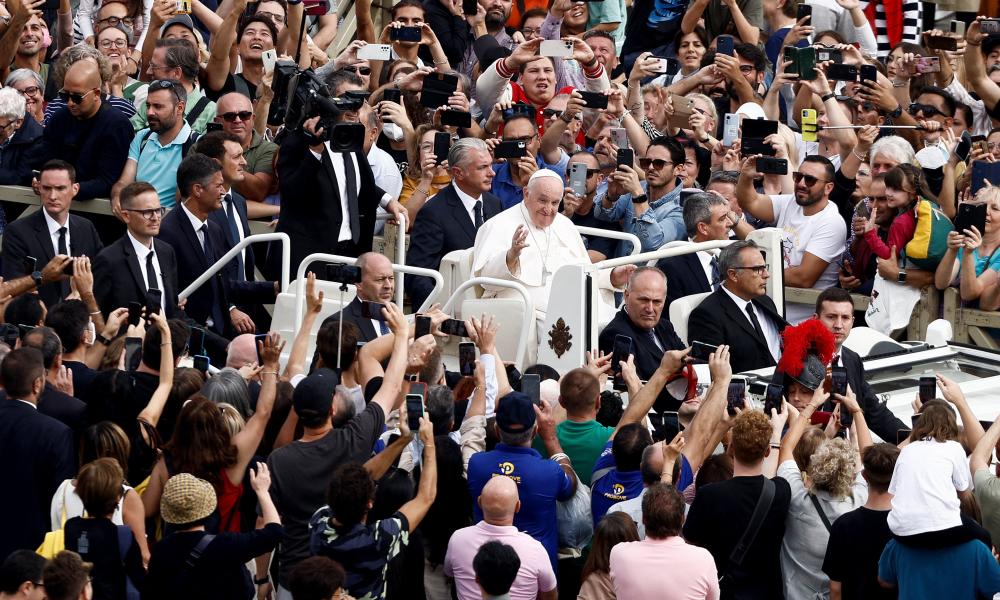 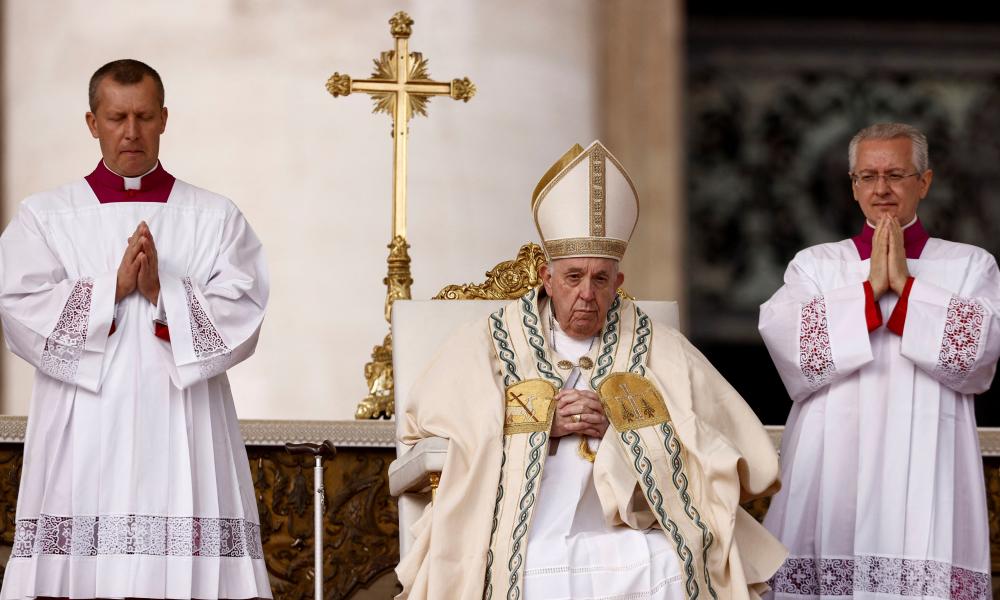