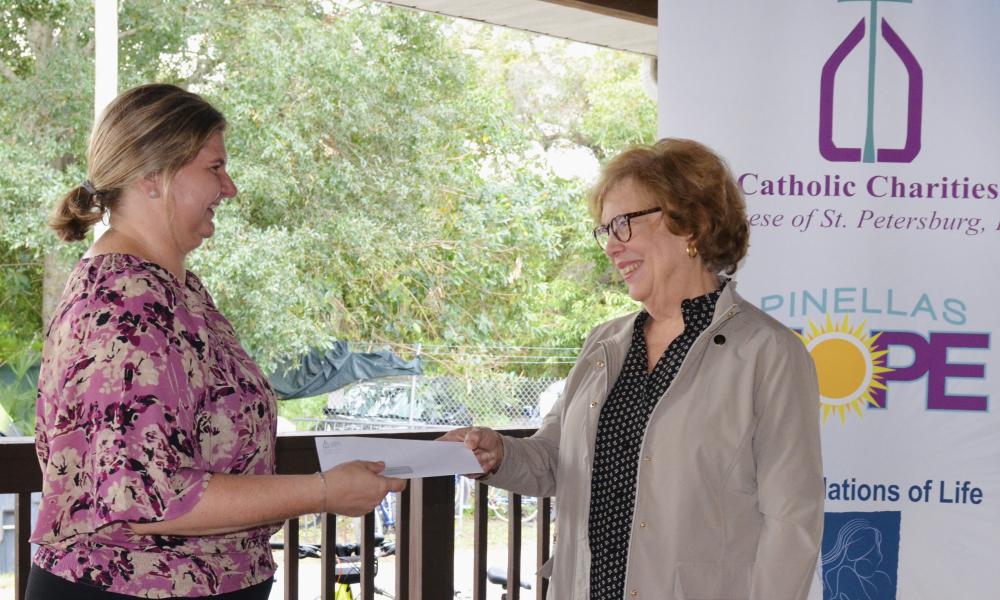 Catholic Charities USA President and CEO Sister Donna Markham, traveled to the Tampa Bay area this week to present Catholic Charities Diocese of St. Petersburg with a check for funds to serve those impacted by Hurricane Ian.

October 14, 2022 | Sister Donna Markham, President and CEO of Catholic Charities USA was at Pinellas Hope in Clearwater on Thursday, October 13th to present a $250-thousand-dollar check to Catholic Charities Diocese of St. Petersburg. The funds are to assist those impacted by Hurricane Ian in the local area.

“At Catholic Charities, USA, we're just so blessed to have donors across the United States, corporate donors, individuals who really want to help in these times of disaster. I'm thrilled that because of their generosity, we can take 100% of what is donated to us at Catholic Charities, USA, and be able to deliver that to the dioceses that have been hit so hard in this latest disaster,” said Sister Markham.

The presentation took take place at Pinellas Hope, a program of Catholic Charities Diocese of St. Petersburg which provides a safe living environment for homeless individuals and supports them in becoming self-sufficient. Residents of the shelter were evacuated to local schools following county evacuation orders ahead of Hurricane Ian.

Maggie Rogers, Executive Director of Catholic Charities Diocese of St. Petersburg accepted the check during a presentation attended by Pinellas Hope residents and staff who have been instrumental in the relief effort.

"Hurricane Ian, while not as devastating for us as for our neighbors to the south, nonetheless created significant damage. We are grateful for the financial assistance Catholic Charities USA is providing as it will aid us with our recovery," said Rogers.

Pinellas Hope and other shelters and missions located within the Diocese of St. Petersburg were damaged by the storm.

“We've responded very well to the San Jose Mission and the needs that have happened from the damage that took place there with the roofing. We're continuing to take care of that as well as the quick response to Pinellas Hope and Tampa Hope to restore the tents and housing that were there,” said Monsignor Robert Morris, President, Catholic Charities Board of Trustees.

“We're all part of a big Catholic Charities family and when the family is in trouble, we need to come together and be present to support one another. I just felt the need to be able to come down here and let you know that we're with you and you're not by yourself down here,” she said. “You are in our hearts, in our prayers and in our minds, and it's important to come say that in person.”

CCUSA and its disaster response teams have a long history of mobilizing quickly to meet the needs of those affected by catastrophic events in the U.S. and its territories. This work begins with direct relief to meet immediate needs, such as water, food and shelter. It continues — sometimes for many years — with long-term relief efforts, including housing and home repairs, financial assistance and crisis counseling, that help individuals and families rebuild their lives. To donate make a donation to help those impact by Hurricane Ian visit https://ccusa.online/Ian