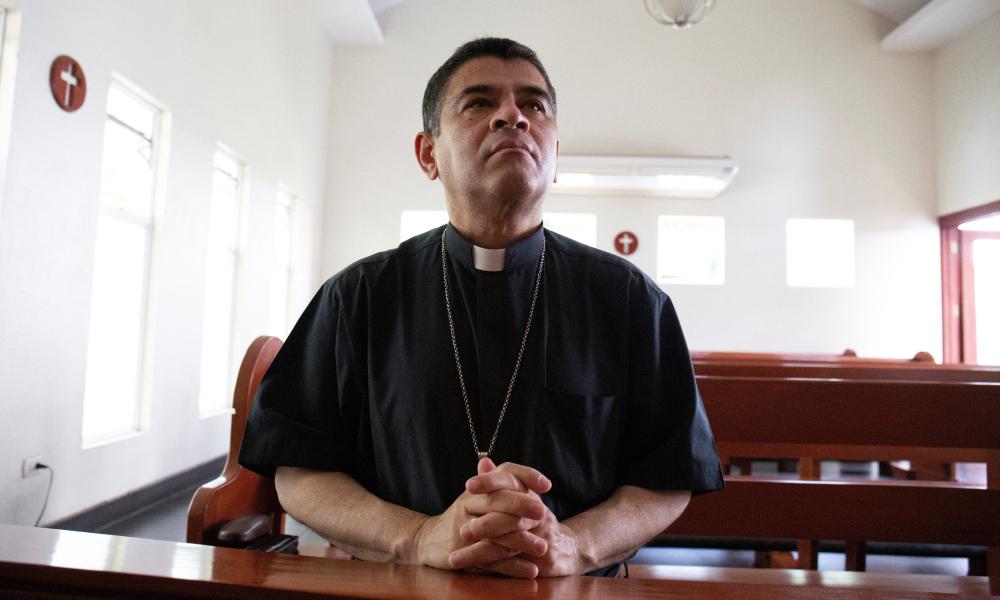 Detained Bishop in Nicaragua Says Hate Must Be Answered With Love

August 8, 2022 | (CNS) -- Nicaraguan Bishop Rolando José Álvarez offered a message of love to the world Aug. 7 even as he continued to be detained by police inside a church building in Matagalpa.

"We have to respond to hate with love, despair with hope, and fear with the strength and courage given to us by the glorious and resurrected Christ," the 55-year-old prelate said in a video posted on various social media platforms.

The bishop, along with a group of priests and lay Catholics, has been prevented from leaving the building since Aug. 4. A few days before his detention, several Catholic radio stations under the auspices of the Diocese of Matagalpa were shuttered by the government.

The bishop has been openly critical of the government of Sandinista President Daniel Ortega because of its repression of the Nicaraguan populace and violation of human rights. The government has expelled Catholics from the country, including an order of nuns in July, and the Vatican's ambassador, known as the nuncio, in March.

After Bishop Álvarez publicly objected to the closing of the radio stations, he soon after found the entrance to the the local curia blocked by police, though he was not charged with a crime.

Late Aug. 5, however, Nicaragua's national police announced an investigation that included the bishops, saying violent groups were organizing to "carry out acts of hatred against the population, causing an atmosphere of anxiety and disorder, disturbing the peace and harmony in the community, with the purpose of destabilizing the state of Nicaragua and attack constitutional authorities."

"I am being investigated. That's fine, but I don't know why," the bishop said in the video released Aug. 7.

And even though he and his companions are under what amounts to house arrest, he said they have the strength and peace that only the resurrected Christ can provide.

"We have the joy of the one who tells us, 'Courage, don't be afraid,'" he said. "Remember, beloved brothers and sisters, fear paralyzes."

In a separate video, also released Aug. 7, he appears singing "El Amigo" to police officers in riot gear detaining the group and blessing them. The song, popular in Latin America, is about a good friend. You can hear the voices of those detained with him joining in the singing, which includes the lyrics: "In certain difficult moments in life, we are looking for someone to help us find the way out."

Many worry that after Nicaraguan authorities said they were investigating him for inciting violence, it signals that the government could be making plans to send him to a prison for dissenters. In 2019, Auxiliary Bishop Silvio José Báez of Managua, who also had been critical of the government and received death threats, left the country. He later said Pope Francis had asked him to leave; the bishop said the pope told him, "I don't want another bishop martyr in Central America."

Though Bishop Álvarez seems to count on international support, social media also has been propagated with videos showing the bishop's face in the crosshairs and the words "asesino" or assassin, followed by Nicaraguan Vice President Rosario Murillo saying that those who are bitter "disappear."

On Aug. 7, Nicaraguan Cardinal Leopoldo Brenes read a statement from the country's bishops saying they were in communion with their detained brother bishop.

"This situation touches our hearts as bishops and as the Nicaraguan church," Cardinal Brenes said, adding a phrase from the first letter to the Corinthians: "If (one) part (of the body) suffers, all the parts suffer with it."

An organization of agricultural Nicaraguan workers also posted a tribute of photos of the bishop during his ministry with his rural flock, with the song "El Amigo" playing in the background.

Caption: Bishop Rolando José Álvarez of Matagalpa, Nicaragua -- a frequent critic of Nicaraguan President Daniel Ortega -- prays at a Catholic church in Managua, Nicaragua, May 20, 2022. On Aug. 1 the bishop criticized what he described as a government crackdown on freedom of expression and religion. (CNS photo/Maynor Valenzuela, Reuters)