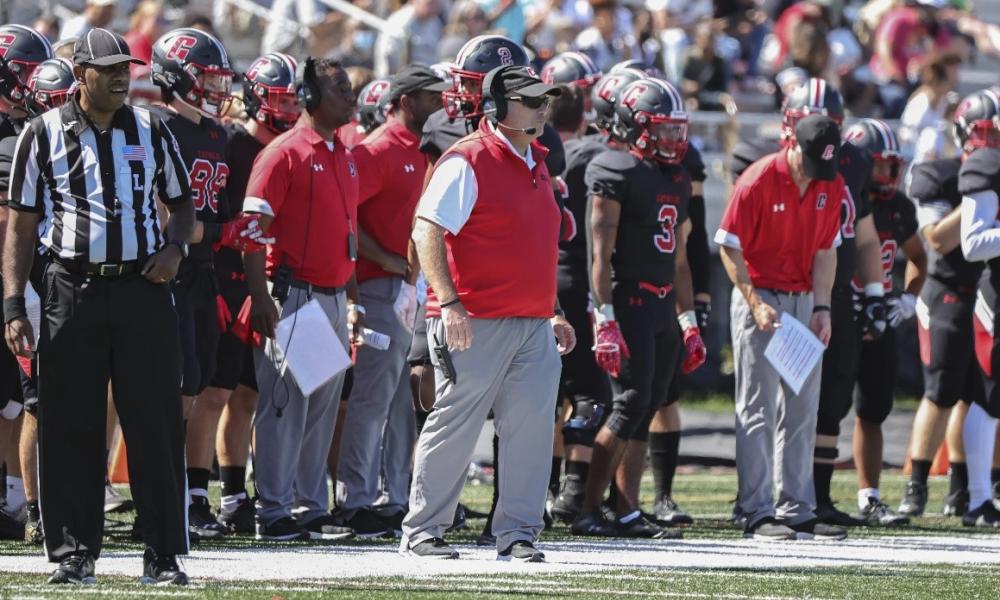 Oct 22, 2021 / (CNA) - The Catholic University of America’s head coach Mike “Gut” Gutelius is trying to change the culture of his football program and his team is having great success. They were 5-2 and undefeated in its conference heading into its Oct. 23 game against the Merchant Marine Academy.

When he started as head coach in 2016, he introduced a slow but steady process to put a special emphasis on faith: Team Bible studies, pre-game rosaries, and discussions about the Cardinal Virtues all figure into his plan for developing young men with character.

Although Gutelius describes himself as “just a coach,” his success and faith life on and off the field drew the attention of Ablaze Family Ministries (AFM) and world-renowned Ignatian spirituality speaker, Fr. Timothy Gallagher, O.M.V.

AFM, a nonprofit organization based in Ellicott City, Maryland, with a mission to strengthen Catholic families, has teamed up with Gallagher to find a way to make St. Ignatius of Loyola’s 14 Rules for Discerning the Will of God more accessible and relatable to a younger audience.

“St. Ignatius of Loyola has crafted an invaluable set of 14 practical guidelines (rules) to understand and respond to this daily ebb and flow in the spiritual life,” Gallagher told CNA. “As I know from almost 40 years of experience, people love the concrete wisdom of these rules that help them know what is of God and what is not, and how to accept the one and reject the other.”

Gallagher, a frequent speaker on EWTN, has an extensive international ministry providing retreats, spiritual direction, and teaching about the spiritual life. He currently holds the St. Ignatius Chair for Spiritual Formation at St. John Vianney Theological Seminary in Denver.

Because of his platform as a college football coach and his authenticity as a faithful Catholic, Gutelius was a clear choice for AFM and Gallagher to help bridge the gap between the academic nature of Ignatian spirituality and a younger audience that could greatly benefit from Ignatius’ rules for discernment.

Gallagher told CNA that Gutelius “brings a wealth of experience to help make this bridge between St. Ignatius’s words and our daily experience.”

The project, produced by AFM, is called the “Playbook for the Spiritual Life,” and features 10 videos explaining how to apply St. Ignatius’s rules for discernment.

The 10-minute videos feature Gutelius, filmed in the locker room or on the field, giving a unique game situation and explaining how to act during that time of adversity. After the coach's brief introduction of the football concepts, Gallagher then explains how the football analogy is similar to a particular Ignatian rule.

"In football you have to be aware of what's going on, you have to understand the game, and you have to execute. It's the same in your spiritual life,” Gutelius told CNA.

In one video the two men discuss St. Ignatius' fourth rule, which states, “When your heart is discouraged, you have little energy for spiritual things, and God feels far away, you are experiencing spiritual desolation. Resist and reject this tactic of the enemy!”

Gutelius first explains the necessity of lifting weights in order to succeed in the game. However, sometimes, he says, players are physically drained and are unmotivated to work out. The coach says the decision to either take a day off or push through the temptation makes the difference between winning and losing come gametime.

Gallagher then likens the challenge of lifting weights during a time of unmotivation to a young man who “has no energy for prayer” and is tempted to scroll through his phone, rather than read scripture as he planned. Gallagher says that the choice to scroll through the phone will leave the young man feeling empty, while if he chooses to read scripture as planned, he will feel more fulfilled.

“Football is an analogy for life in general and in that sense you can find a lot of connections between football done well and spirituality done well,” Gutelius told CNA. “Both require practice, commitment, and a desire to get better, and you’re going to have bumps and bruises in both football and your spiritual life.”

Executive Director of Operations at AFM, Deacon Steve Sarnecki said the combination of all these elements make the videos effective.

“Father Gallagher’s theological excellence when it comes to Ignatian spirituality, Ablaze’s unique ability to create family friendly, approachable, accessible content, and Coach Gut’s ever-present witness and understanding of strategy and the spiritual life came together in a beautiful weave for this project,” he said.

Gutelius said he was enthusiastic to be included in the project. "I hope that if I have any small part in maybe reducing a barrier for young people, then I am fired up to do it,” he said.

Gabe Aparicio, the team’s senior captain, told CNA that Gutelius has been a spiritual and fatherly role model for the whole team.

“Gutelius’ office door is always open for us and I’ve had multiple conversations with him about life and faith, and honestly, he’s the type of person, the type of Catholic I aim to be someday,” Aparicio said.

Gutelius graduated from The Catholic University of America in 1992 with a major in politics and a minor in philosophy. When he is not on the field or in the game-film room, he can often be found attending a campus Mass or showing prospective players around campus. He currently resides in Maryland with his wife Kimberly, and children Michael, 21, Sam, 19, and Mary, 16.

“I firmly believe St. Ignatius will be pleased with how this series presents his rules for discernment,” Gutelius said.

“Maybe even pleased enough that he might intercede a little bit to help the Cardinals get a big win this weekend?” he added. “We can always use a little heavenly help in worldly matters but especially this weekend vs the Merchant Marine academy!"

Photo Caption: Mike Gutelius (center), head football coach of The Catholic University of America, watches the action on the sidelines.