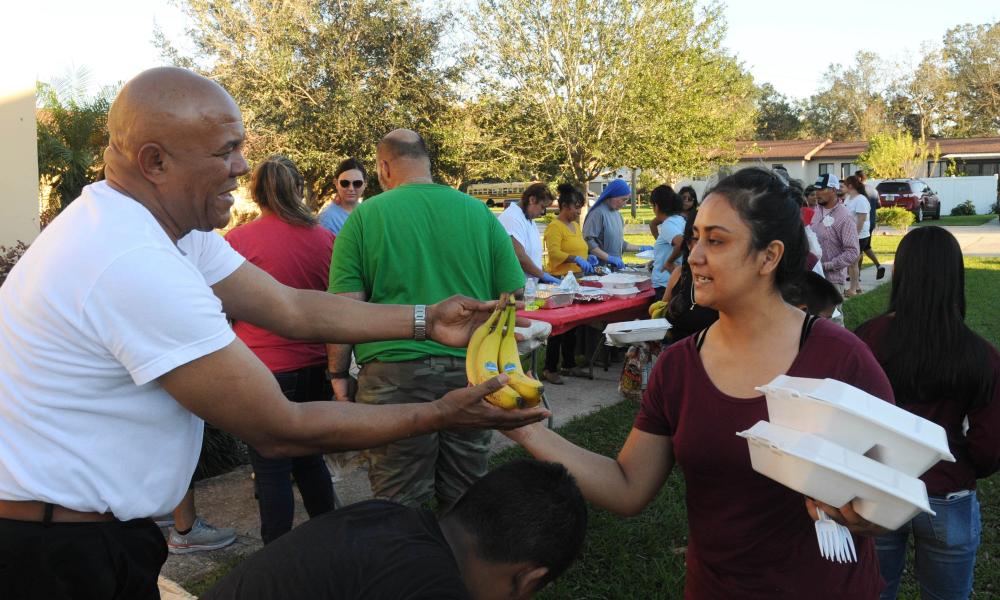 Church, Community Help One Another

Despite being located in an inland county in southern central Florida, Hurricane Ian was slated to barrel through Wauchula and the Peace River was getting high, so an immigrant family sought shelter at Hardee Junior High School.

October 5, 2022 | (CNS) -- The 7-year-old boy who sat with his family in the cafeteria of Hardee Junior High School was too shy to say his name.

He smiled as he sipped the straw in his can of Coke Zero, but he didn't eat much of the hot meal in front of him -- a small piece of chicken, rice and beans.

In front of his food tray were two plastic figurines -- one of a Despicable Me Minion and one of Luigi, half of the plumber duo of Super Mario Bros.

The boy who wouldn't share his name was more than happy to talk about everything he knew about Luigi, Mario, Princess Peach and seamlessly segued into a different video game fandom involving Sonic, Knuckles, Shadows, Miles and Dr. Eggman.

As he talked about that, his mother, a 38-year-old immigrant from Mexico, spoke about something far more sobering. On Sept. 27, the family -- mother, father and three sons, ages 15, 7 and 6 -- were told to evacuate their Zolfo Springs house of seven years -- the only home the youngest two boys had known.

Despite being located in an inland county in southern central Florida, Hurricane Ian was slated to barrel through the area and the Peace River was getting high, so they sought shelter at Hardee Junior High School.

"Of course, I'm sad, I'm nervous, I'm frightened. Our home is gone," she said in Spanish. "We are here (at the shelter) and I am grateful, but it is difficult."

And she said while her three sons are doing their best, they do feel the sadness and weight of the loss. "At night they do say they want to go home, but we cannot return home."

Sitting at the table with her was Sister Gema Ruiz, director of religious education at St. Michael Parish in Wauchula. She delivered hot food to the shelter and to check on displaced residents she knows.

The family are parishioners of St. Michael, and seated at an adjacent table was a Wauchula resident familiar to Sister Ruiz.

David is in his mid-60s, and he arrived at the shelter with his wife after weathering the storm in the early morning hours of Sept. 29. He tried to save as much as he could during the night, collecting gallon after gallon of water that would seep into the trailer.

When the sun came up, he thought the worst was over. After having a sleepless night, he took a nap thinking some of the water might subside by the afternoon.

Instead, it got much worse.

Officers came and told the couple they had to leave for their own safety. They had 10 minutes to say goodbye to the place they called home for 25 years.

"I woke up and when I stood up, there was water up to my knees," he recalled. "Then we got outside and there was 4 feet of water in the yard."

David had survived Hurricane Charley in 2004 in that trailer, but what made Ian different was the amount of water. Days before Ian, the area had been saturated by rains. As David said, "the Peace River was so high before the storm," and Ian caused the river "to quickly flood."

"My 1969 trailer was built out of nickel and steel alloy, really strong stuff. Weathered Charley OK. I lost two vehicles and a lawnmower," David continued, his voice fading out, before looking at Sister Ruiz and adding with a laugh, "And I just had that water system put in. Guess it doesn't matter now."

"It does matter, and we'll get through this together," said Sister Ruiz, a Servant Sister of the Virgin of Matará.

"Now tell me, was your wife able to get her prescription from Wal-Mart?"

The young boy and his family and David and his wife represent the faces of those suffering from Hurricane Ian.

The late September storm hit Florida's southwest coast, especially Lee and Collier counties as a Category 4 hurricane. It destroyed the parish on Sanibel Island and ravaged portions of Fort Myers, Cape Coral, among other areas. Then it headed inland, where it wreaked havoc in small farmworker and working-class towns such as Wauchula, Zolfo Springs and Arcadia.

But Sister Ruiz and Sheryl Mosley, principal of Hardee Junior High, are among those making sure victims understand they have support.

Mosley said when the county superintendent closed school to prepare for the storm, her staff -- from custodians to cafeteria workers, administrators to educators -- volunteered to prepare the campus as a shelter, feeding and housing those in need.

Some 1,200 people sought refuge there, including 16 families who lost their homes during the storm due to a fire at a local apartment complex.

Many left to return to their homes, but some of the families whose homes were destroyed stayed at the shelter. Mosley and a team of volunteers stayed with them.

"I'm so proud of my staff," said Mosley, who had only spent a few hours at her own home since preparing the shelter. "We do this because we love these families."

In particular, she was talking about the large population of immigrants from Central America now established in the Hardee County community.

She said they are important to the community and was visibly sad because she knew many who lost their homes would have to leave Wauchula to find a place to live.

"They are hard-working parents and their children are so appreciative. They value education," Mosley told the Florida Catholic. "We get close to these families. They trust us. The parents trust us and we make sure to help them in any way we can."

But with the school reopening the week of Oct. 3, more than a dozen families needed to be relocated to another shelter.

While at the junior high visiting displaced families, Sister Ruiz also spoke with a Red Cross representative and offered to prepare hot meals for the families as they move to the next shelter. But she needed to know where the shelter was located.

With that information in hand, Sister Ruiz returned to St. Michael in time for a distribution of a hot meal on the grounds.

Despite not having electricity, parish volunteers utilized a propane-powered stove and oven, outdoor grills and battery-powered lanterns to cook a hot meal each day following the hurricane.

Outside, large pots of pasta boiled while lasagna cooked in the kitchen of the parish hall.

"This is the first day we've had running water," Sister Ruiz said happily. Before that, they used water donated from local agencies. The parish has served hot meals to 420 to 250 residents each day since the hurricane. It also opened a food pantry for residents.

A familiar site formed along the pavement in front of St. Michael's church building as residents lined up to gather meals for themselves and family members.

They waited patiently as volunteers lined trays of food upon three long tables. Wearing gloves, they made the finishing touches as Father Juan Lorenzo said in Spanish, "Are we ready to serve? OK. In the name of the Father, the Son and the Holy Spirit."

The priest asked for God's blessings upon the food, those who came to partake and the volunteers who, although many of them also had no power at home, took the time to feed their neighbors. Then the line of people approached.

While the waters of the Peace River will eventually subside, the aftereffects of Hurricane Ian will be long-lasting.

But just as Sister Ruiz said, the Catholic Church will walk with those in need and offer help. 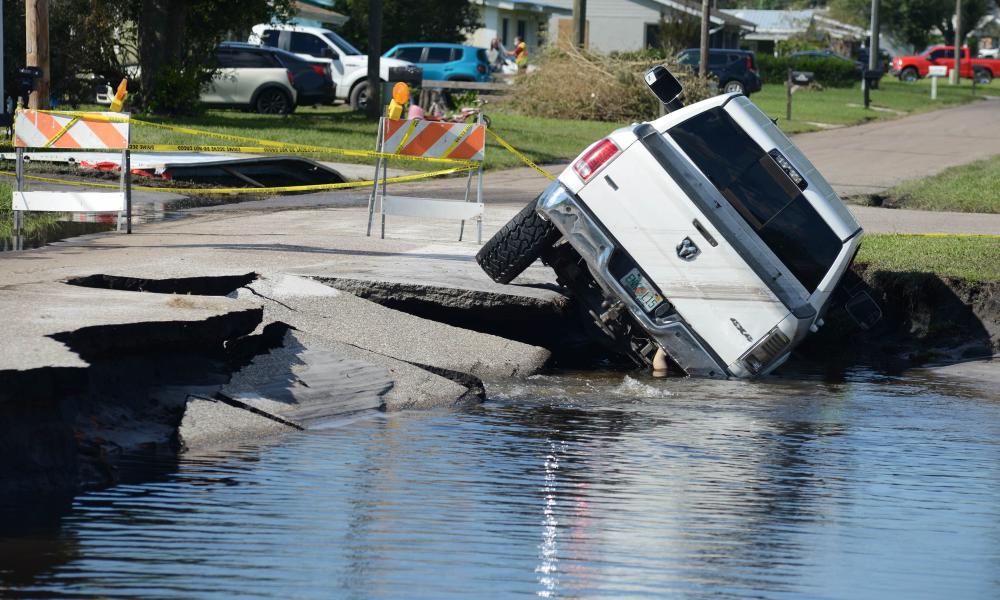 A collapsed road under this truck is a familiar scene on a neighborhood street in Wauchula, Fla., Oct. 2, 2022. When Hurricane Ian made landfall Sept. 28 on Florida's west coast and came through this inland area Sept. 29, it dumped rain on the already saturated ground of Hardee County, leaving portions of the area with 3 feet of standing water. (CNS photo/David Gonzalez, Florida Catholic)

Gonzalez is on the staff of the Florida Catholic, newspaper of the Diocese of Orlando and three other Florida dioceses.